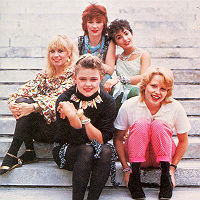 The Backstory
Margot Olaverra was a Valley Girl with dyed day-glo hair and chola makeup whose friends called her “Popsicle Head.” After seeing the Sex Pistols in the U.K., she had returned to Los Angeles determined to learn bass and start an all-female punk band. Classmates introduced her to drummer Elisa Bello and Wisconsin-born Jane Wiedlin, a doe-eyed pixie with a helium voice who was studying fashion when she fell in with Hollywood’s punk scene. Rechristening herself “Jane Drano,” Wiedlin was also looking to start a band though she didn’t know how to play guitar.

One night at the Whisky, they met Belinda Carlisle, a perky cheerleader from Thousand Oaks who had discovered punk via Iggy Pop’s Raw Power. In May 1978 the foursome came together as the Misfits and debuted at the seminal punk club-slash-toilet the Masque. Informed they would be playing a birthday show for singer Hal Negro mere hours before they were to go onstage, Carlisle remembered in a TV interview, “We played three songs, the second one twice. People were either laughing hysterically or being absolutely mortified.”

On Wiedlin’s suggestion, the band renamed itself the Go-Go’s and began honing its chops. The outfit often converged upon a faded stucco fourplex on Cherokee Avenue called “Disgraceland,” so named because of the cheap plaster bust of Elvis besmirched with Alice Cooper makeup. The girls partied hard and started their own “Bootie Club” to keep track of their male sexual conquests. “So much of what we were doing revolved around boyfriends—getting laid, basically,” Wieldin told VH1 in 2000. “But I all that time remember thinking, ‘If only we could be rock stars, we would be so happy!'”

Later that year, the band began to shift to a more poppy sound with the addition of L.A. native Charlotte Caffey, an accomplished guitarist and songwriter. (“She knew how to turn the knobs on the amps,” recalled Olaverra.) Due to internal wrangles, which would become an unfortunate hallmark for the volatile band, drummer Bello was booted in favor of elfin powerhouse Gina Shock, whose musical pedigree included briefly backing John Waters stock player Edith “The Egg Lady” Massey. A trial-by-fire followed.

In March 1979 the Go-Go’s played the infamous “St. Paddy’s Day Massacre” at the Elks Lodge in MacArthur Park, a gig that was raided by the LAPD’s notorious goon squad. That December, they spent three months in the U.K. opening for British ska band Madness at the height of the unfortunate Britpunk practice of “gobbing.” Being spit on unlocked a spark of creativity in Caffey, who hammered out aggressive riffs and added the iconic chorus to “We Got the Beat,” which the band recorded as a single for the British indie label Stiff. At the same time, Wieldin hooked up with singer Terry Hall of the Specials. When they broke off their relationship, he sent her a letter and she married some of its lines to a chilly, New Wave melody that became “Our Lips Are Sealed.”

In 1980, after the Go-Go’s returned to L.A. (“like whipped puppies” in Wiedlin’s words) Olaverra was arrested for drug possession and contracted Type A hepatitis. In a controversial decision, the band dropped Olaverra along with her original, edgier vision of the band and replaced her with bassist and songwriter Kathy Valentine, another pro who had played in the heavy metal band Girlschool.

Thanks in part to the popularity of “We Got the Beat” in L.A. and U.K. dance clubs, band manager Ginger Canzoneri managed to catch the interest of IRS Records honcho Miles Copeland and the girls flew to New York to record their debut. At the time, IRS was a fledgling label with a limited budget. (This was pre-R.E.M.) There was no money for wardrobe, so the girls opted for terrycloth towels and face peels for the album’s cover shoot. Afterwards, the towels were returned to Macy’s.

Why You Should Listen
Beauty and the Beat became the first #1 album written and performed by an all-female group and an enduring document of the early days of New Wave. It produced only two bona fide hits but it possesses an infectious joi de vivre, irresistible pop hooks, and an inspired instrumental punch. Producers Richard Gottehrer, who had written the girl group classics “I Want Candy” and “My Boyfriend’s Back” in the 1960s, and Rob Freeman, who had had worked with Blondie, managed to smooth out the band’s rougher edges without turning the songs into saccharine confections. Carlisle’s vocals were the anti-Pat Benatar; she keened and cooed in the voice of a thousand shy and insecure Valley Girls while Caffey and Wiedlin gamely alternated on surf- and rockabilly-influenced guitars. But the band’s secret weapon was its rhythm section: Shock’s thunderous drumming and Valentine’s rubberband bass lines juiced the songs into infectious anthems.

The Aftermath
Released in July 1981, Beauty and the Beat‘s success took everyone—including the band—by surprise. On the strength of its first two monster singles the album hit #1 on the Billboard album charts and stayed there for six weeks. The girls made the cover of Rolling Stone, played Saturday Night Live, and partied with John Belushi on the Strip. Despite the haters—one review declared that “The Go-Go’s are to music what botulism is to tuna”—they became America’s sweethearts. Their rise to fame dovetailed perfectly with the rise of MTV, and their cheery, shot-on-a-shoestring videos (including illegally cavorting in a Beverly Hills fountain) made them heroines to the Swatch and Scrunchie-wearing tween set. Director Amy Heckerling used “We Got the Beat” in the opening credits for her 1982 slice-of-Valley-life film Fast Times at Ridgemont High, forever connecting the music of the Go-Go’s to the golden days of the American suburban shopping mall.

There was only one problem: At heart, they were still a hard-partying punk band. “We were cute and bubbly,” Wiedlin told an interviewer. “We were also twisted, crazy, drug addict sex fiends.” In the late ’80s, the Go-Go’s popped up on one of the first bootlegged sex tapes (back in the days of VHS); during a drunken afterparty in Atlanta, bassist Kathy Valentine provided narration for a sozzled roadie attempting to masturbate for the camera (“You have to watch really intensely, okay?”) while Carlisle confesses to “sleeping around a lot.” “We spent hours trying to drive our road manager crazy,” Wiedlin remembered in SPIN. “We would take pictures of our crotches, then slip them underneath his hotel room and write, ‘Guess whose is whose!'”

Due to drugs, booze and weight issues caused by a punishing regimen they called “The Go-Go Diet,” the band split up in 1985 but have since reformed periodically. As the group’s focal point, Belinda Carlisle went on to a moderately successful solo career. Jane Wiedlin tried to do the same, releasing a superb but overlooked album in 1985, and later wound up on The Surreal Life being disrespected by female rapper Lil’ Brat. The ladies were immortalized in a memorable early episode of Behind the Music and in 2011, they received a star on the Hollywood Walk of Fame (in front of the former location of the Masque). They also inspired an all-male tribute band from Portland, Oregon called, um, We Got the Meat.

Signature Tracks
“Our Lips Are Sealed” – Caffey’s “We Got the Beat” may have moved more copies but Wiedlin’s moody classic is the band’s true legacy. Released a quarter of a century before “slut shaming” or “cyberbullying” were buzzworthy topics, the single’s power comes from its anti-gossip lyrics, Valentine’s goosing bass line (especially during the dreampop bridge), and the women’s tandem vocals, which mimic a chorus of school confidantes clustering around a secret.

“This Town” – Wiedlin and Caffey paired up to write this twang-heavy B-52’s pastiche and instant L.A. anthem. Its lyrics posit partying as empowerment: “Make up that face/Jump in the race/Life’s a kick in this town!”

“Skidmarks on My Heart” – One of the many love-gone-sour tunes on the album, this Caffey/Carlisle collaboration was tailor made for broken-heart mixtapes for the next 20 years.

Fun Fact
Today is the 33rd anniversary of the record’s release.