Home Uncategorized The Festival of Books: A Dream Schedule 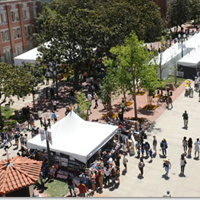 Going through the program schedule for this weekend’s Los Angeles Times Festival of Books can be overwhelming—if not outright panic-inducing. So many panels! So many names! How can I see Julie Andrews? Does that mean I’ll miss Gail Simmons? Why are they screening Watchmen? Who liked Watchman?

Don’t worry, this suggested schedule, curated by us, for your weekend at USC is here to help. Yes, it will require a bit of hustling—both in advance (get those tickets now) and on the day of (bring running shoes)—and making everything won’t be easy to pull off. That’s OK: With eight outdoor stages, fourteen panel rooms, and some 400 authors to choose from, you could probably get lost on campus and still find your way into an amazing talk. Well, maybe not if you stumble into Watchmen. That movie’s terrible. But everything else is a safe bet.

10 A.M. – Festival Kickoff
USC Stage
Eddy Hartenstein, Kathy Thomson, C.L. Max Nikias, Trojan Marching Band
It’s generally advisable to skip opening ceremonies, but you can’t come to USC and not hear its famed Trojan Marching Band. During the speeches, orient yourself to the campus and map out your route for the day.

10:30 a.m. – John Green in conversation with Lev Grossman (Panel 1091)
Bovard Auditorium
John Green, Lev Grossman (interviewer)
This should wake you up: a sure-to-be lively intellectual discussion between two guys who love books and technology. Green writes Y.A. fiction and co-founded the popular vlogbrothers channel on YouTube; Grossman writes about books and technology for Time magazine (and his adult fantasy Magician King was one of our Critic’s Picks last year).

3 p.m. – Mystery and Magic in Mind and Matter (Panel 1144)
Hoffman Hall, Presented by USC
K.C. Cole, Deborah Harkness, Tim Page
“Presented by USC” means it’s a panel composed of USC faculty—and these are some of the best and brightest. Cole is a top science journalist; Harkness wrote this year’s best-selling A Discovery of Witches, and Page is a Pulitzer Prize-winning music critic.

4:30 p.m. – T.C. Boyle with an Introduction by Ralph Lewin (Panel 1124)
Ronald Tutor Campus Center
T.C. Boyle, Ralph Lewin (introducer)
He’s the pride and joy of USC’s English faculty and a staple of the festival. Another must-see for L.A.’s literary set.

2 p.m. – Fiction: The Literature of Obsession (Panel 2033)
Andrus Gerontology Center
Matt Bondurant, Judith Freeman, Ellen Ullman, Brighde Mullins (moderator)
Have we not been to a fiction panel yet? This should be a fascinating one. Brighde Mullins, a playwright and the director of USC’s Master of Professional Writing Program, moderates a discussion of “The Literature of Obsession” with three experts on the subject.

3:30 p.m. – Young Adult Fiction: Future Tense
YA Stage
Cecil Castelluci, Marie Lu, Lissa Price, Aaron Hartzler (moderator)
Given the spectacular success of The Hunger Games, “dystopia Y.A.” might be the most popular genre in America at the moment. These three writers—we really like Marie Lu—would each love to become the next big thing. See if they’ve got what it takes.

And that’s a wrap! The festival officially ends at 5 p.m., so use your final minutes to do some shopping, explore any remaining exhibitors, or collapse under a tree and start one of your brand-new books. Happy reading.

Tickets are available online now, with a $1 service fee applied to each panel ticket reserved