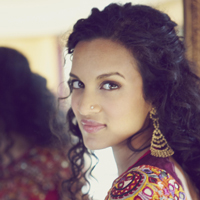 At the age of thirty you’ve released six albums. That’s highly unusual—so how does it feel?
Well I don’t honestly sit around feeling like I’ve accomplished a huge amount. I did start really, really young, and in a family where everyone is kind of doing what I do, so it doesn’t feel unusually spectacular in any way to tour or to make music. More than anything I feel really, really lucky. When you have a job that you love and get to have a recording contract and make albums when recording companies are falling apart everywhere, that’s something to feel grateful for. And I feel happy that people connect to my music.

Speaking of your music, your last album, Breathing Under Water, fused classical sitar instrumentation with electronic beats. How do you get from there to Traveller?
I suppose you have to look one album further back for the answer. The album Rise was my first experience with exploring outside of the Indian classical tradition and making music that was influenced by what I had grown up with outside of my performing and family life. There’s electronica, there’s Middle Eastern music, there’s flamenco—these are all styles that I love very much.

In the last couple of years I’ve moved back to Europe and have been, I suppose, in a different world yet again, and flamenco kind of came back to me. But I had always wanted to do more with it.

How did you first discover the genre?
I graduated high school in California and went on a trip through Europe with a few friends. One of the places we visited is Barcelona. That was my first time taking a holiday outside of being on tour, and we were going to out flamenco clubs and bars and I fell in love with the entire package—the music, the atmosphere, the electricity of it.

Is it intimidating to try your hand at a new style?
It depends. I often put myself in situations that totally freak me out sort of half consciously. I take it on because it seems really exciting and then I go, Oh god, what was I thinking? What ends up happening is it’s a really amazing opportunity to grow. I tried to approach it with a level of sincerity and fun. Flamenco is one of the greatest living traditions today and I didn’t want to do anything that flamenco musicians would listen to and say, ‘What is she doing?’ Or, ‘How dare she?’ I had to put in a lot of study to understand the form and to play it the best that I could.

You were a bit of a gypsy growing up yourself. Does that experience help you connect different genres of music?
In a few ways, yeah. It’s a big part of why I’ve made the music over the last few years that I have. I’ve always had open ears that have taken in music from around the world, and that gives you a real openness as an artist. The lifestyle is something that I connect to. The whole theme of Traveller was trying to explore the feelings that I have in a modern sense and to go back to the roots of this music that has traveled with traveling peoples in the past.

You’ve worked or performed with Sting, Lenny Kravetz, Herbie Hancock, Joshua Bell—who would you love to work with next?
My number one is still Bjork. I was really influenced by her as a teenager and I’m actually relistening to Biophilia right now and think it’s quite amazing. I love that she just does what she does. She takes her audience with her on whatever journey she’s on. That’s brave and really unique nowadays.

You have a one-year-old. How’s touring going so far?
It changes everyday. We started touring a few months ago in Europe and that was one thing because Zubin was seven-months-old. By the time we got to India it was another thing because he was ten-months-old, and now he has just started walking, so everything is going to change again. It’s a little hectic. I love the adventure of it and it’s made my baby seem to have a really interesting outlook and character already. He’s so good with people and music and arts because he just goes to shows and travels. I think he’s been to nine countries already! At the same time, I feel torn between doing what I’ve always loved doing, which is touring, and getting to be home just being with my baby. I’m in a bit of flux trying to decide how I want to redraw the balance.

It sounds like Zubin’s already learning the family profession. Are you hoping he’ll follow in your footsteps?
It’s a mix. I’m sure it would bring me pleasure and it also makes me nervous. I got through it OK but I’m aware of the situation being one that can be very difficult for kids. I’d love to share music with him, but whether he wants to take it on as a career is totally up to him. Part of me feels intimidated like, Will I end up being his teacher? Would I have him learn from someone else? It’s all so new!

Your tour ends here in Southern California. What happens next?
I’m going to hang back for about a week in Encinitas where I grew up. After that I’ll go back to London to work on a new recording and develop some compositions, that kind of stuff. Back to work—but in one city.