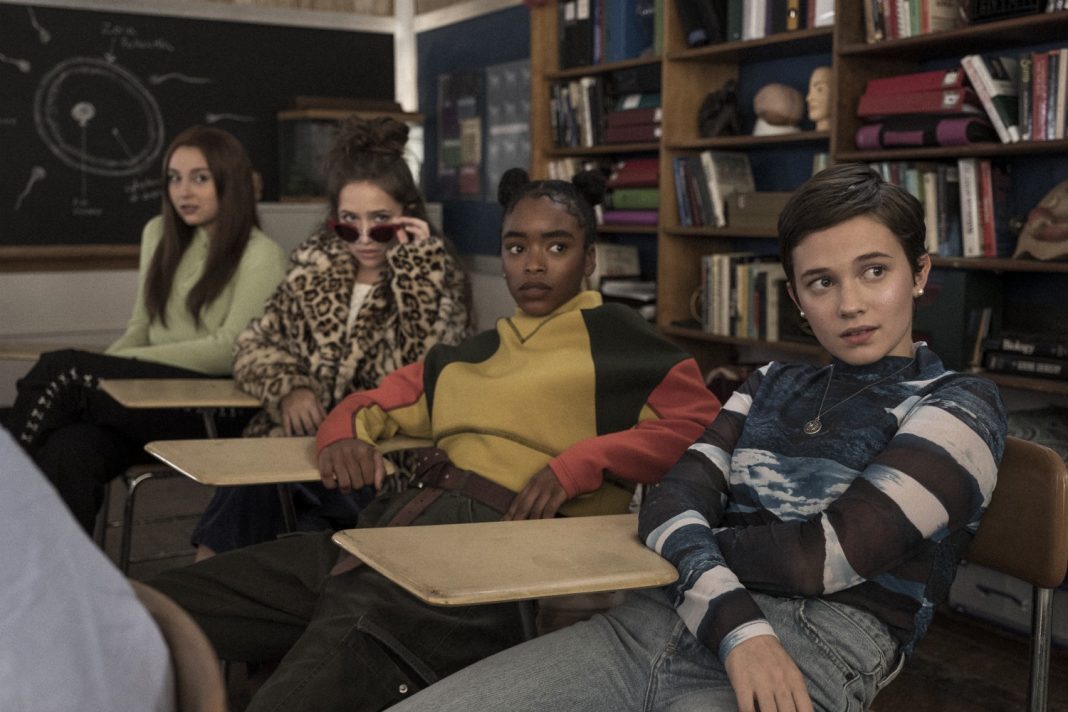 Beloved by a generation of girls who wore chokers and experimented with black lipstick, the 1996 teen horror The Craft inspired untold number of failed spells and slumber party-set games of Light as Feather, Stiff as a Board. More than anything, though, it made us contemplate power and its consequences, all while allowing us to vicariously revel in the short-lived fantasy of sticking it to the meanest girl at school; commanding the affections of the hot guy; and suddenly being, like, Connie Francis-jukebox rich.

Zoe Lister-Jones, writer-director of the new sequel The Craft: Legacy (now available on VOD), takes that contemplation of power a step further, dissecting the ravages of white male supremacy in a tale that’s tailor-made for a new gen of weirdos. Sadly, storylines about boys who can’t keep their hands to themselves are as timely now as they were in 1996.

We caught up with Lister-Jones by phone to talk about the new movie, the old movie, and how the witchy tale makes a lot of sense in our current political climate.

You’ve been getting involved politically, some PSAs and stuff, right? I’ve seen you popping up here and there.

Yeah, I’ve been politically active in my own way for many years, and now more than ever. There’s just no choice but to be. So I’m trying to do whatever I can to just help get out the vote, push for Biden-Harris. I think getting out the vote is important, but I have no fear in endorsing a candidate to end this rise of fascism…and the potential end of democracy as we know it.

Horror has always been a way to tap into our worst fears about the world we live in, and this movie is so perfectly timed given that it’s about the horror of white male patriarchy. I don’t know how long you’ve been working on the project, but how political were you intending on being when you started working on script?

I was asked to pitch a take on a reimagining of The Craft a little over two years ago. It actually has been a pretty fast journey, relatively speaking. And I think it was really inspired by Jordan Peele and the revelation that is Get Out. Because there have been certain horror films or genre films that have stuck with me from days of yore.

But generally speaking, I also have struggled with the glorification of violence and particularly glorification of violence against women in the genre. When I saw what Jordan was able to do in terms of creating a genre film that also served as social commentary, I was so inspired. And so my intention was always to create an allegory that could also touch on resonant issues.

But I think that’s always what I tried to do in my work, in the last four years, obviously, the scope of nefarious forces that were, have been so overwhelming. And I think especially for women and young women to bear witness to leadership that not only has been accused of sexual assault but has bragged about it. It’s so deeply harmful to the psyche of all women. So when I was asked to reimagine a film that was already ahead of its time in terms of telling the story of young women stepping into their power—outsider women, women who refuse to fit into the mold of the male gaze—I was just so excited at the opportunity because it just felt like such a right moment do so.

I’m assuming you were a fan of the original film. Do you remember when you first saw it and what you thought of it?

Yeah. I was just so excited to see young women weirdos on the screen. I was definitely, like, the target demo. I shaved my head when I was in seventh grade, and I definitely was bullied and isolated. And so I think as we know, representation really matters in media and it was really helpful to see some version of myself that I could feel a little more seen in mainstream media. And it was just so much fun. So fun to see that vengeance story. When it came to me as a grown-ass woman, I was like, “Hell, yeah.”

It’s a movie about these young women and young women discovering their power, but it also becomes a story about different ways men can express masculinity. There’s a male character, Timmy, who has a sort of involuntary awakening and becomes pretty central to the narrative. Why make a dude such a big part of the woman-centric movie?

I was interested in exploring the ways in which toxic masculinity also causes harm to men. And I think men coming into that realization is what I find really hopeful about the future. Because allyship, I think only, really is functional when those who have however unconsciously been the oppressors also understand that the systems at work are harming them. I wanted to explore that and I also wanted to portray an aspirational, modern masculinity.

And I think there is a new generation of young men who are aspirational. I find this new generation of young people just so inspiring at a time when we could all use some inspiration and hope for our future. I wanted to portray that authentically, and also not have it be quite so black and white. That I think, in terms of sexual fluidity and just the boxes that young men are forced to live within, and how rigid those boxes are even in 2020. What would it look like if this young man had the courage to step outside of those boxes? Which I think they are doing more and more.

I also think Gen Z seems to be more earnestly interested in things like these alternative sources of spirituality and intuition. Did you feel like that was something you tap into as well?

I think witchcraft and just the archetype of the witch is very much a part of the Zeitgeist in a cool way now where I think the stigmatization is decreasing. I think that Gen Z and that community has embraced it in a really cool way. And when we did our chemistry test with our coven members, they all were—outside of Cailee Spaeny, who plays Lily—they were all already practicing witchcraft.

I didn’t know that, but when they came into tests with each other, they just all started talking about astrology and Zoey Luna [who plays Lourdes in the film] is this amazing astrologer, and Lovie [Simone, who plays Tabby] is this incredible herbalist, and Gideon [Adlon, who plays Frankie] reads tarot. It was just incredible to see that they were already embodying these characters in such a real way and had so much to bring to these characters from their own experience. I think that is what’s so beautiful about witchcraft, is that it is very much a personal expression of one’s spirituality, and it can take whatever form one chooses. And then to take each of those personal impressions and bring them into community, which is the beauty of covens. We were just watching that unfold in real time; it was so cool.

Rachel True, who starred in the original film, reads tarot at House of Intuition here in L.A. Did you work with the women from the first movie when you’re working on this?

I met with each of the original cast members. And so that was just like, as a fan girl, very exciting. And Rachel is obviously a practitioner in her own right, and actually has a book coming out. So everyone should look out for it. They’re all just so lovely, and I definitely wanted each of their blessings in taking on the legacy. Pun intended.

You got to have a lot of fun with David Duchovny’s character. Did you have him in mind from the start? How was it to work with him?

It was so much fun to work with him. I have been a fan of his forever. He’s such an icon, obviously, that I was just so excited that he was interested in joining the cast. I just think that as an actor, he’s so nuanced and those nuances just played so perfectly into the character that I had envisioned. So we had a blast and continue to be friends. I never thought that I would be friends with David Duchovny so, I’m really pretty excited about that.

Besides Get Out, are there other horror movies felt inspired by while you were making the film or anything you’ve seen recently that you were like, “Fuck, yeah”?

Yeah. In addition to Get Out, The Babadook I would say is number one. I think Jennifer Kent is amazing. That’d be my number one. And I mean the original Carrie is just one of my favorites and such an inspiration.

A Controversial List of the Greatest Horror Movies of All Time