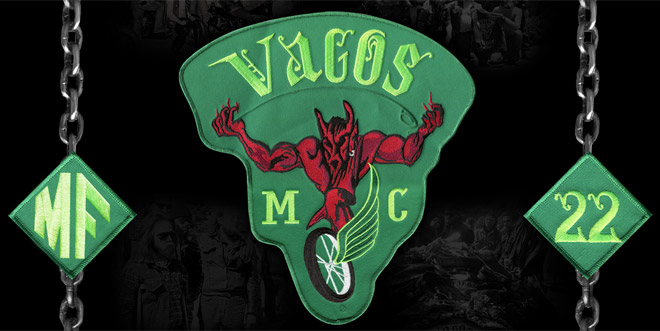 If you think life in an Outlaw Motorcycle Gang (OMG in law enforcement parlance) is like a Sons of Anarchy episode, think again. Charles Falco went undercover in three biker gangs, all of which have deep roots here in Southern California, and lived to tell the tale. In fact, he wrote a book about it. Vagos, Mongols, and Outlaws: My Infiltration of America’s Deadliest Biker Gangs features head-splitting tales of violence, mayhem, and drugs. Now in the Witness Protection Program, Falco chatted with us (via phone from an undisclosed location) about his time as an outlaw rider.

Q: What’s the biggest misconception people have about biker gangs?
CHARLES FALCO: People have a romantic view of it, a Hollywood view of it, Rebel Without a Cause. I think most [of the people in biker gangs] are miserable men who stick to the drugs and the alcohol. They’re very abusive — to each other and their women. It’s not really a brotherhood. They’re always stabbing each other in the back. They’re always positioning for power. People look at it like it’s this great brotherhood. No. It’s a constant cycle of betrayal.

They can’t go into a lot of bars with their colors on. People don’t want to be around them because they’re afraid of them. Picture a bunch of 50-year-old men sitting around their clubhouse talking about getting the Hell’s Angels. It doesn’t really exist the glamorous life.

Q: What did you learn while writing that you didn’t learn riding?
CF: How crazy the undercover operation is. I look back and think, “Wow, I can’t believe I made it out alive.”

Q: You mention William Queen’s book about infiltrating the Mongols (Under and Alone). Did you consult any other books on outlaw motorcycle gangs before writing this book?
CF: I’ve read other ones, but did I use anything from them? No. My favorite biker book ever written was Hunter S. Thompson’s book [Hell’s Angels: A Strange and Terrible Saga] from the 1960’s. They have the same mindframe and act the same now. Billy Queen’s was probably my favorite biker gang infiltration book.

Q: What do you think of Sons of Anarchy?
CF: I think it’s a very entertaining show and I enjoy watching it, but it’s fictional. The TV show exaggerates their stature in the criminal world. Sons Of Anarchy makes them look like they’re in the top echelon of criminals. They’re more like the armpit of the criminal world. They’re hardcore, vicious criminals, but they’re low-lifes. It’s more a picture of guys hanging around in a crackhouse or a meth house. They’re much more involved in drug addiction and alcoholism than in Sons Of Anarchy, and they’re much more vicious, especially to their women. There’s one woman for every 20 guys. At a party, it wasn’t all these beautiful women; it was a few toothless meth head women and bottom of the barrel people. If I would have had a head cam on me when I went into these bars, I could have made a million dollars just on how these bars really look.

Q: What are you doing these days? Do you fear for your safety?
CF: I think you always have to fear for your safety. I have a witness protection program ID that I use. I don’t hang out in bars. I don’t live in an area where any of these groups live. You’ve got to always look over your back. You watch for cars following you. When I was doing the Outlaws, I had to check my car every day for bombs. I still catch myself looking under my car for bombs now and then.

Q: Is there anything law enforcement can learn from your book about stopping these gangs?
CF: I think first and foremost it’s making sure that you look at them as a gang. They’ll try to tell you they’re not a gang, that they do Toys For Tots, that they give to charities. That is all a facade so they can fool the public and get the public on their side. They are a gang. They kill and fight over territory. Their main purpose in life is to grow, to be anti-social, to be against society. They commit murders. They poison your town.

They do a great job in Southern California. A lot of police forces here are so gang-trained. They’re really good at making sure they enforce the laws and harass these guys as much as they legally can for being gang members. They would pull me over and tell me, “We’ll do everything in our legal means to stop you.” Because once they find a town that is friendly, they move in.

Q: What was the hardest part of writing book?
CF: Reliving it. It brings that fear back in view when you have to relive it. It’s a scary world.

How I Infiltrated One of L.A.’s Most Vicious Motorcycle Gangs—and Lived to Talk About It