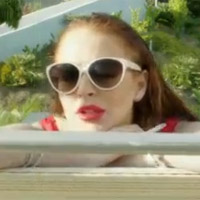 Funded via Kickstarter (yes, in the year 2012 the guy who wrote Taxi Driver and Raging Bull is crowd-funding his latest film), most of what we know about The Canyons comes from Ellis, a prolific and witty Twitterer (@BretEastonEllis). The film’s IMDB tagline simply reads: “Youth, glamor, sex and Los Angeles, circa 2012.” So then, a sequel to Less Than Zero?

No official release date yet, but in the coming weeks, the film’s producers plan to debut two more teasers: one that resembles a 1950s melodrama and the other, a 1930s comedy. Douglas Sirk and Preston Sturges, get ready for your homages.