Home Uncategorized The Broad Opening Delayed Until 2015, But It’ll Have a Restaurant 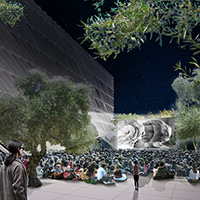 First, the bad news: The opening of Eli Broad’s semi-eponymous Grand Avenue museum, which was supposed to open in the fall of 2014, will be delayed until sometime in 2015. Now, the good news: The institution, which originally didn’t include plans for a restaurant, will now feature an eatery overseen by Bill Chait, one of L.A.’s most prominent restaurateurs, and Timothy Hollingsworth, former chef de cuisine at French Laundry in the Napa Valley.

Says Hollingsworth about his involvement, “I’m excited to create a concept that really fits the neighborhood as a whole, from the restaurant itself to the programming and community outreach. I’ll be living in the apartments in the building next door, really submersing myself in the community. We’ll be designing our cuisine to fit the vibrant and adventurous culinary neighborhoods surrounding L.A. and that we ourselves like to eat. It will be modern and innovative yet still very approachable.”

The news was officially announced this morning though the Los Angeles Times ran the story this weekend.

This morning’s other major Broad-related reveal was the renderings of the new Broad Museum Plaza, a 24,000-square-foot park just south of the museum. The idea is to create a greenbelt that runs from Grand Avenue to Hope Street. Per the press release, a new mid-block traffic signal and crosswalk will connect The Broad and its plaza, which are on the west side of Grand, with MOCA, the Colburn School, and its other neighbors on the other side of the street. Pedestrians will have access to stairs and an elevator at the Hope Street end of the plaza so they can walk across this portion of Bunker Hill and access Hope Street as well as the planned 2nd and Hope Street Metro station.

The plaza, which will feature movable seating and olive trees (originally seeded in the early 20th century in Northern California), was designed by Diller Scofidio + Renfro and Hood Design. It is already underway and will open in the fall of 2014. The plaza will serve as a venue for films, performances, receptions, educational events, and dining events produced with the restaurant.