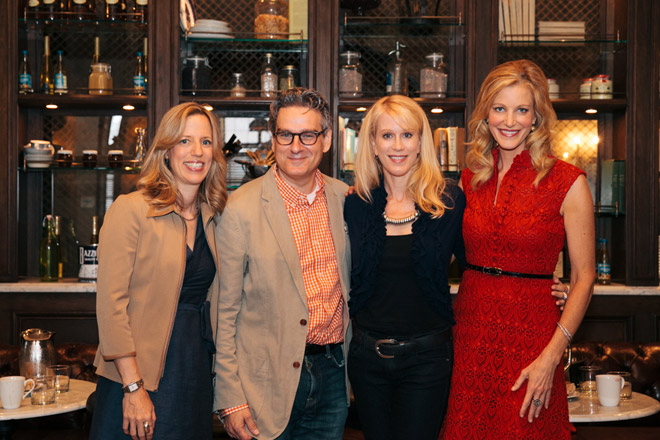 L.A.-based crime experts Los Angeles Superior Court Judge Lance Ito and Assistant US Attorney Bruce Riordan may have been in attendance, but the latest event in Los Angeles magazine’s Breakfast Conversation Series, held today at Public Bar & Kitchen in the Hollywood Roosevelt Hotel, focused on a ruthless drug dealer operating nearly 800 miles away in Albuquerque, New Mexico—Breaking Bad’s Walter White—and his associates. Moira Walley-Beckett and Peter Gould, both writers and co-executive producers of the AMC drama, joined actress Anna Gunn (Skylar White) in a Q&A about the show. Moderated by the magazine’s editor-in-chief, Mary Melton, to coincide with writer Laurie Winer’s piece about the show in the July issue, the writers and star discussed Breaking Bad’s evolution, its many complex characters, and the second half of its final season, which premieres on August 11. The chat remained spoiler-free but shed light on the creative process behind the program. Here are three insights to hold show addicts over until their next encounter with Heisenberg:

Show writers worked hard to let the characters drive the plot, instead of working the other way around.
In response to a question about how Breaking Bad’s writers crafted its dramatic arc without knowing how long the series would ultimately run, Gould said putting character development first was key, and that it took on average two weeks to pen each episode. We asked ourselves, “Where’s Walt’s head at?” he said. “The characters told us what’s next.” The fact that so many of the show’s characters were in a state of flux made the writing process especially tough. As a result, fighting for realism became part of the job. Show creator “Vince [Gilligan] empowered us to call bullshit,” said Gould.

Still, according to Walley-Beckett, there were points when the writers themselves did not know where the story was headed. Citing the first episode of season 5, when Walt, Jesse, and Mike try using a scientific solution to wipe out electronic evidence of their misdeeds following meth distributor Gus Fring’s death (“magnets, yo!”), Gould explained it wasn’t until Walt proclaimed the experiment worked “because he said so,” that the show’s writers knew what that season would really be about.

The show’s actors—like its fans—were kept in the dark during the writing process.
According to Gunn, she and co-star Bryan Cranston stopped asking Gilligan about their characters’ pasts and futures after the first season. “In life,” said Gunn, “you never know what’s coming around the corner.”

Walt just might be a lunatic after all.
When Breaking Bad was conceived, said Gould, it was about a guy with the cards stacked against him, but it quickly became about a guy driven by his inner demons. Walley-Beckett agreed, saying the show creates a moral dilemma for the audience—and that’s one of the reasons it’s such a hit. In another version, set in Canada, the series would be about a man who “gets lung cancer and gets treatment, end of show,” Gould joked. Luckily for fans, a simple storyline is not one Gilligan and his team pursued. As Gould put it, “That’s the glory of drama.”

Breaking Bad Gets Its Own Beer
Crystal Method: Steve Erickson on Breaking Bad
RJ Mitte’s My LA to Z