Home comedy The Best of the Best Show 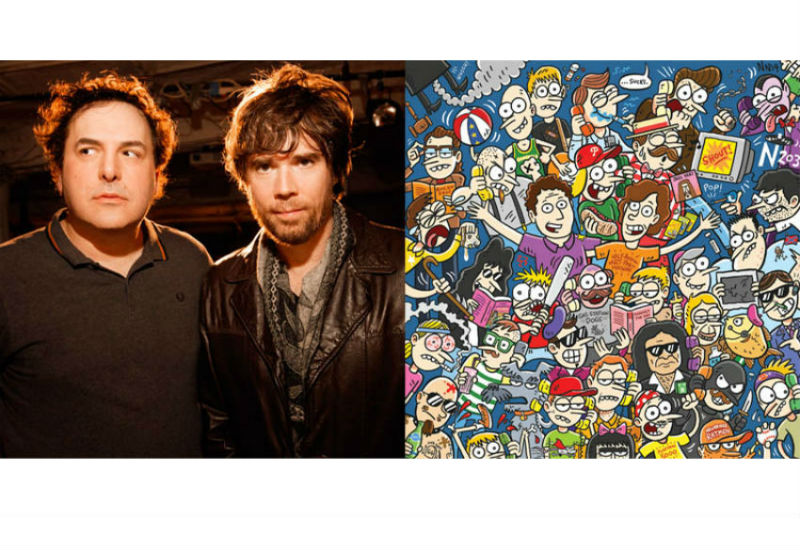 For thirteen years writer/comedian Tom Scharpling hosted and produced the New Jersey-based radio program The Best Show on WFMU, a combination of music, on-air phone calls and comedy. The show garnered a worldwide cult following as a result of being distributed online and has been championed by the likes of Conan O’Brien, Amy Poehler, John Oliver and Zach Galifianakis.

Jon Wurster (who also drums for indie rock acts Superchunk, The Mountain Goats and Bob Mould) routinely called into the The Best Show as a variety of hilarious characters that hail from the fictitious town of Newbridge, New Jersey.

The Best Show now exists as a non-terrestrial, Internet radio program and on Tuesday, May 12, Numero Group will release The Best of the Best Show, a 16-CD box set that includes over 20 hours of Scharpling and Wurster routines, most of which are previously unreleased or unaired. Meticulous, fun and built-to-last, the set also comes with a 108-page hardcover book and a USB drive that contains all of the calls plus bonus material, as well as trinkets like paper dolls, postcards and temporary tattoos.

We spoke to Scharpling and Wurster about the box set as well as their current work on The Best Show.

Who is The Best of the Best Show box set intended for?
Tom Scharpling: Everybody will feel represented by this. That was the goal: that it wasn’t just for super fans. You should be able to give somebody this box and, without them knowing what we do, they can feel like they get all the major parts. There are a few recordings that have come out in other forms but they needed to be in there to tell the story properly.

Jon Wurster: Maybe there was a call that we knew a handful of people would like and we would want on there but would not make a ton of sense or be super funny to people that were not as knowledgeable about the show. I think we ended up on a really good mix.

Is the box set a way to commemorate the show’s run on WFMU?
TS: Yeah. Kind of a nice, clear bookend of that era. Or like a big way to start half of the things. Maybe thirteen years from now we’ll be working on volume two. It’s so funny—when I just said that, I actually started to feel the weight of working on this theoretical box thirteen years from now and it started to stress me out.

JW: It will be just as torturous—no matter what editing program there is by then.

So what was it like to go through thirteen years of recorded material for the set?
JW: Well, we didn’t willingly listen to The Best Show after we would do it because of the nature of the show. We’d do a routine on Tuesday and then maybe have Wednesday off and then by Thursday you start thinking of what the next one will be. So, there was never time to really listen to what we did. So, it was hard to hear our own voice, ten hours a day for several months. You kind of lose perspective on what’s funny and what isn’t and I think there are several times where we were talking each other down off of the ledge.

TS: You really are not supposed to hear that much of yourself talking. I think I went five weeks without listening to music. Being in the thick of it, there was no opportunity to listen to anything else and then finally one day you listen to music and it’s like, “oh my God, this is so nice to something that’s not my voice going ‘blah blah blah.’”

Did going through the material inform what you guys are currently doing with The Best Show?
JW: I think in terms of the calls that Tom and I do, it really helped us figure out how to make the calls even tighter. If you listen to the early calls on the box set there’s a lot of searching for the next thing we’re going to say. Whereas if you hear the calls from the last couple of years, they are really tight because we realized what we need to focus on and what could be cut out. And working on the box set made us even more aware of that and how to make the calls more enjoyable.

TS: We are definitely at this place where the calls are moving faster and faster and there’s more comedy and more information getting conveyed in the same amount of space. There’s one call on [the box set], this Philly Boy Roy* call where he’s mad that he wasn’t in Silver Linings Playbook. It goes a hundred and fifty miles an hour. It’s so fast and there’s so much stuff going down. Ten years earlier, the content of that call would have made up two calls, maybe three calls.

Were you inspired by other box sets in putting yours together?
JW: My favorite is The Clash Sound System set that came out a couple of years ago. It has things like little books and buttons and little knick-knacks. We wanted to have things like that in our set. For me, it’s almost like those KISS records where you were a kid and you just open them up all these little things kept coming out of it.

TS: I thought about the Big Star box, Keep An Eye On The Sky, where it tried to just walk you through everything and make it a good listening experience, whether you were a super-fan or new to that band. It works for everybody. There’s a Faces box set, Five Guys Walk Into a Bar, which tells the story of the Faces without being completely chronological with the song order. That was important to us. We didn’t want it to just feel like “this one is just the beginning.”

* Scharpling and Wurster’s recurring character, Philly Boy Roy, is defined by his mischief and pride of being a Philadelphian.