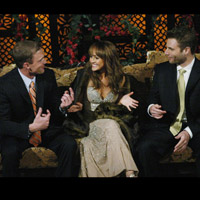 Brad Womack may have fallen for Emily Maynard early on, and Ali Fedotowsky may have given her First Impression Rose to her now fiancé, Roberto Martinez, but let’s face it Cupcakes, the first episodes of The Most Shocking Season of The Bachelor/Bachelorette Ever never really open with a bang.

Roslyn Papa getting booted for having what producers described as an “inappropriate relationship” with a show staffer? That happened in episode 2. Craig M. dressing up in the weatherman’s clothes? Also an episode 2-fer. Naomi’s mom asking Jason Melnick to bury a dead bird in the family backyard? Episode, like, 5. Ed Swiderski’s neon bikini? Worth the long run up to that finale!

So, in the spirit of not jumping into 30 serious relationships on the first night—what kind of girl do you take us for, anyway?—we’ve compiled LAmag.com’s first ever Bachelorette Suitor Cheat Sheet.

Here’s everything you need to know now about Ashley Herbert’s men:

Ryan, 31
Wears suits to work and wants better for the world. Better what? He doesn’t say. But no, sadly that doesn’t make him seem mysterious. The odds he’ll break out into song mid season: 5:1

J.P., 34
Construction guy with a startlingly long, er, cordless phone. Shops farmers’ markets for produce. Shows up with only himself and “his smile.” Kinda cute.

Ames, 31
Has 4 Ivy League degrees, traveled to 70 countries, ran 39 marathons and—surprise!—works with numbers. We were going to tally the odds that he’d offer Ashely tickets to the ballet during the course of the season, but then he got out of the limo with a pair of ballet tickets, taking all the fun out of it.

Benjamin, 28
Winemaker. Likes well-rounded cultured women. Misses his late father. Looking to break his track record of dating “a lot” of blondes. Odds Ashley will appreciate that comment during playbacks: 1:10

Bentley, 28
Father to Cozy. Kisses his dog on the mouth. Wants to date Emily Maynard. Doesn’t fold the clothes he packs. Odds Ashley will not be adequately alarmed by any of the above: 6:1

Anthony, 28
Small-town butcher who loves to work because he knows he makes people happy. Carnivores mostly, we’re guessing. Says he’s never been on a blind date. From the way he sizes Ashley up when he gets out of the limo, that’s probably because the people he know wouldn’t exactly recommend him to other people they know. We take it you have to get to know him.

William, 30
Bad with umbrellas in the wind. Laughs at his own bad luck. Wears a watch set to the time his father passed away. Leads with previous heartbreak, comes back with a Sean Connery impersonation. Odds he re-starts the clock on his watch in a romantic gesture for Ashley: 1:1

Jon, 26
A decent looking Marine Corp. vet. Likes the color purple (but not the book or movie that we know of).

Lucas, 30
The conservative of the group, he’s blond, a hugger, and a self-described Texas boy. We expect nothing short of mania from this one.

Mickey, 31
The goof. Goes in for a kiss, wears too much product in his hair.

Tim, 35
Tells Ashley outside that hopefully he’ll see her inside. Optimist, or idiot? Also, first to drop an F bomb. Snores when he’s drunk.

Stephen, 27
A hairstylist with fashion hair. That is literally all we found out about this person.

Rob, 27
Proves unmemorable despite his ability to properly recap a confrontation for the producers.

Matt, 28
Makes up secret handshakes with his uncle, then shares them with strangers. Also, puts Ashley on the phone with his mom, who offers the “motherly advice” to use protection in the fantasy suite.

Michael, 29
Wears a three-piece suit. Also, enemy #1 to every musical instrument donation program in the country.

Jeff, 35
Masked. He just figured he’d “go out on a limb and not show his face.” Seriously.

Chris, 27
Thinks he and Ashley have looots in common. We’re not cooonvinced.

Ryan, 27
Asks Ashley to take his photo with Chris Harrison.

Blake, 27
Didn’t learn much from the show—never a good sign—but according to his bio at abc.com, if he could be anyone for a day, he’d chose Tiger Woods.

Constantine, 30
Tied pink dental floss around Ashley’s finger to reminder her to talk with him.

OK, now go ahead and forget all about Tim, Michael, Anthony, Frank, Chris M., Rob, and Jon. They’re out!

We’ll be back with a full recap next week. See you then.