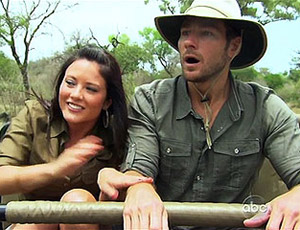 Just three women are still standing, and in one week’s time (two week’s time if you count The Bachelor: The Women Tell All) Brad could be proposing marriage, so it’s understandable that he opens this episode saying he is about to make “one of” the most important decisions of his life. He’s confused and feeling anxious, and the sky cries for him just a little bit as he heads to JFK airport.

If you don’t already know from the tribal soundtrack, we land in South Africa, and before you can think of a decent joke about Brad’s ridiculous wide-brimmed hat, we’re off on a safari date with Chantal. Chantal who last week put her dog in a body conscious sweater. Just sayin’. Out on the savannah, Brad and Chantal encounter lions and a giraffe (Brad: “I mean, this is his home.”) and zebras and elephants and rhinos and monkeys. “I think a lot of relationships go through a test of some sort,” says Brad, vaguely insinuating that sitting in the back of a hummer with an armed guide is a lot like, you know, someone losing their job or a loved one, things like that.

Chantal’s on the same page. She sees the safari as a metaphor for what’s going on in their relationship. “There are scary things going on,” she says, and actually, she’s not wrong. Brad is wearing Tevas.

But all this living on the edge helps Chantal put things in perspective. “I want what’s best for Brad,” she says, wiping away tears. “And it’s me, damn it.” Then Brad and Chantal launch into a non-ironic conversation about the unimportance of an engagement period. I mean, why on earth would two people who meet, fall in love, and get engaged on a weeks-long reality show need any time at all to get to know each other better before tying the knot? That would be just so pedestrian. And Chantal’s “not that kind of person.”  A hippo, who’s been eavesdropping all day and apparently seen it all, remains nonplussed.

Before long Brad and Chantal are off to consummate their imminent elopement, er,  forgo their separate rooms and spend the night as a couple in the fantasy suite, which in this case is a fantasy loft in a tree high above the plain. We could speculate what happens next, but frankly, we don’t want to.

In the morning, Brad’s a little too excited to meet up with Emily. After running to her for a big hug, Brad tells Emily that he forgot something and asks her to wait for him to pick her up. Which he does. On an Elephant.

NOTE: Ali and Roberto, you may want to skip this next line.

To which Emily says, “This is like The Lion King. But better.”

Over lunch Emily asks Brad how he feels about possibly having an instant family with her and her daughter, and he responds with a surprisingly heartfelt speech about how he will always include Ricky in everything they do. It’s enough to make Emily tear up and the nearby elephants affectionately lock trunks.

Emily opens up to Brad about her feelings for him over dinner, and even though he’s suddenly looking like a man who didn’t get much sleep the night before, she accepts the key to the fantasy suite—”to spend more time with you. And just talk.”

Actually, Emily wants to go to the fantasy suite so that she can tell Brad that she loves him. When she does, he scratches himself (his face, don’t worry) then stammers for a bit while telling her that he’s falling in love with her, too! “I’m not going to sit here and not say anything back,” he says. And for one, fleeting second, all is right in the jungle.

But in the morning, Ashley shows up. And she has to go for a helicopter ride. Which of course is her biggest fear. Brad does his best to calm her nerves, then tells Ashley that “she’s doing so well,” as they fly high above South Africa. And yeah, if the name of the game were “How loud can you squeal into a headpiece?” she’d be kicking ass.

Finally, Brad and Ashley settle in for a picnic lunch at a spot called “God’s Window.” “Is this real life?” she asks. “It is,” he lies. Things go over the cliff from there. “What happens when you settle down and start your career?” asks Brad. “Do you think you can allow yourself to live while you’re trying to achieve?”

“Oh man,” says Ashley, “you’re making me think.” So much so that she can’t decide which color jellybean she wants to eat while avoiding Brad’s question. In fairness, it’s a doozy. But we’re going to take a crack at answering it anyway: “Yes. I believe that I can uphold my obligation to tend to my husband’s every need while spending some time during the day working outside the household. And I hope that one day women will have the right to vote!”

But Ashley’s inability to reassure Brad that she can have a career and a relationship leaves him with more questions than he had before. Over dinner (a traditional South African feast) Brad points out that when talking about where she would want to live, Ashley did not mention Austin, Texas. “Well I’ve never been there,” she smirks.

“Neither one of us can build an actual future that’s real and everything off the fact that we had an incredible carnival date,” says Brad.

“What I feel for you is, like, chemistry and sparks and I feel like you’re just, like, looking for a wife. Something that will just fit what you want,” says Ashley.

He’s right! And she’s right! And together, they’re so wrong! But…Brad takes a step back from the brink of truth and invites Ashley to stay with him in the fantasy suite, where they “try to reconnect.” Let’s just put it this way: we don’t think they re”connected” quite as well as Brad and Chantal.

At long last it’s time for a chat with Chris Harrison and a rose ceremony. But before he can hand out any roses, Brad pulls Ashley aside to tell her how badly he thinks their date went and how disappointed he is that their relationship has fallen apart. “There’s really nothing that I can do now,” says Ashley. Except tell Brad, who is clearly searching for some attention, that he does fit into your life. But whatever. She can’t do it. And for that, he says goodbye.