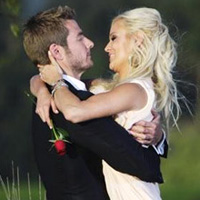 It’s finally here! The Night of Two Limos has arrived, and Brad opens the episode that will complete his transformation from “that guy dating 30 women at once” to “that guy who knew she was the one from the minute he saw her and 29 other women” with big, big words: “I am so ready to move forward. So happy that I am in Cape Town.” (Don’t question it. Like people, some thoughts just belong together.) OK, here we go!

So we know that Brad’s in Cape Town, and lo and behold his family pops up one by one from the brush below as Brad looks over the balcony. It’s enough to make him sob. He welcomes them in then walks away to look over the balcony and sob some more. Someone should hand Brad a Kleenex, or ask in a low, concerned voice if he’s been abused during his interment, but instead they congratulate him on being “a completely different guy” than he was the last time they flew half way around the world to meet his Final Two.

Once Brad returns to the group, his twin brother, Chad, asks if he is “considering purposing?” And he is! “100%”!  According to the thefreedictionary.com, to purpose is “to intend or resolve to perform or accomplish,” so this is BIG.

Just then, the doorbell rings. Chantal has arrived to meet Brad’s family! They welcome her in with hugs and hellos and before anyone can sit down Chantal lets everyone know that she fell in love with Brad in his room after getting caught in the rain in Costa Rica. “Sounds like a romance film,” says one of Brad’s brothers. We remember it more like the beginning of a different kind of film, but details, shmetails.

Chantal opens up about her divorce, which somehow is behind how she fell in love so quickly with Brad, and tells Brad’s brothers that she’d marry him on the spot “right over there” if he purposes. “It really screams her feelings for Brad,” says Chad. He’s nice.

The next day Brad’s family gets to meet Emily, who arrives with a pretty bouquet of flowers! At first they find her to be “more reserved” than Chantal, but upgrade her condition to “poised” once they learn about her daughter, Ricky, and about how she lost the love of her life before she knew she was pregnant. When Brad’s brothers corner him to ask how he feels about possibly having an instant family, Brad says it gives him “the warmest feeling that I can’t describe.” But that’s not all. Emily also tells Brad’s mom that he has been “her angel”.

After she leaves, Brad’s family convenes to talk about Emily and Chantal, Chantal and Emily. And yes, someone fulfills the Bachelor Family duty of saying they’re both special and amazing and that this will be The Hardest Decision Ever Made for Brad and something along the lines of “you can’t lose,” but something else also happens. Something shocking. Something revolutionary. They tell Brad what they think, and they think he should pick Emily!

The producers could have high fived and called it a day right there, but they had another hour of TV to fill, and they had already planned a swimming with the sharks date for Brad to go on with Chantal, who you’ll remember is afraid of water (and more understandably, sharks) so the thing goes on.

At first, Brad does his best to act like he is still interested on his last date with Chantal. He looks happy and says things like “our life together would be so exciting.” And Chantal does her best to grin and bear swimming with a shark, which, it’s obvious, is torture. She’s such a good sport she doesn’t even complain when her wet suit is broken and won’t zip up past her cleavage. Chantal says she sees swimming with the sharks as “a great way to test out the waters before we get married.” Then she tells Brad, “after all this, you better be putting a fucking ring on my finger. Because you suck otherwise.”

Later that night, Chantal gives Brad a handmade map of all the places they have been together, along with a letter that moves Brad Chantal to tears. Chantal tells Brad she loves him when he gets up to go. He tells her to “get some rest.”

The next day, Brad meets Emily for their final date, a picnic at the Cape of Good Hope, aka the windiest place for a picnic ever. Brad shouts to Emily that his family loves her and does his best to make it clear that he purposes to be the best father that he can be to her daughter. But Emily can’t hear him over the wind, and so the conversation continues in Emily’s much quieter hotel suite later that night. “I guarantee that I can love you and your daughter more than you could ever imagine, if you give me the chance,” says Brad. But Emily still can’t hear him—maybe the wind damaged her ear drums?—and so she asks Brad again if he understands that having a kid isn’t always a trip to the park with a kite. Which makes Brad mad and sweaty, and makes him “question everything,” after he says goodnight.

Luckily, Brad looks and sounds much better when he meets with—you guessed it!—Neil Lane, the most dependable jeweler in the world, in the morning. “I don’t know if you know this, but the last time I walked away,” says Brad. Neil’s kind enough not to say so, but we’re pretty sure he’s up to speed on The Bachelor redux sitch, given the facts that a) Brad is The Bachelor and b) Brad returned the first ring. Wait, he returned the ring, right? Either way, Brad picks out another ring to purpose with and shakes Neil’s hand goodbye. The ring Brad selects is super sparkly, but unfortunately they were polite enough not to talk dollars specifics in front of us.

Back at their hotel, Chantal and Emily spend some time journaling, sitting in chairs while drinking coffee, and being grateful for how they’ve grown as people (OK, only Emily does that). Then, finally, it’s time for the final rose ceremony!

Chantal, dressed for the Oscars, gets out of Limo One, and Chris Harrison escorts her, per his contract, to meet Brad.

Here’s what Brad tells her: “The very first time I laid eyes on you I felt a connection and that connection has only grown over time. It’s something I have always looked for, always…and here is where it gets tough. I don’t know how else to say it, except I have stronger feelings for someone else.” Chantal cries, and gets back in the limo and it’s truly awful. But then there is this white cat, and a brunette couple that goes to a dinner party at the woman’s parent’s house, and then there’s another white cat and he’s proposing and—Oh! I’m sorry, that was a Fancy Feast commercial made specifically to air during the finale of The Bachelor. And people say cats are creepy!

On the other side of the break Emily arrives in Limo Two. Chris Harrison escorts her to Brad and before long, he’s down on one knee!

“All it took was coming here and finding you,” he says, “you are something more than a leap of faith. You’re the one.” He opens the ring box, which is from Neil Lane (we know because the logo was big enough to read through tears) and tells Emily “I want to spend my life with you.”

Come what may after the final rose, the Bachelor Franchise will live happily ever after.

Thanks for taking the journey with me. See you next season!