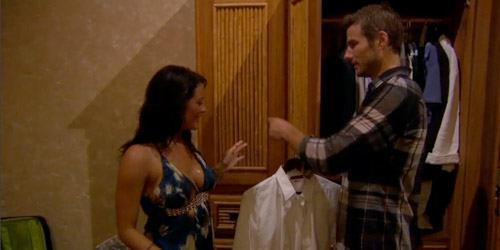 We’re down to just eight women, and Brad and the gang are off to Costa Rica on their journey to find love (or, as Brad puts it, on their journey “to open my heart.” Hey, it’s his journey. He can call it what he wants.) Brad’s feeling confused, and oddly vulnerable. And he “so badly hopes that Costa Rica holds some answers.”

Things get off to a quick start. The women ride up to The Springs Resort & Spa in a Jurassic Park mobile, connect with Brad, and make their way to a stunning suite overlooking a volcano. “It fells so organic,” says Ashley H.  “The more time I spend with Brad, the more sure I am that I’m going to make him fall in love with me,” says Michelle. “As awesome as it is sitting and looking at a volcano, I need a date,” says Alli,

Chantal O., Close Your Eyes and Hold On Tight. Love is in The Air Tonight.
Sorry Alli, Brad’s first one-on-one date goes to Chantal, who recently disappointed Brad by crying, whining, fishing for compliments, and being generally jealous of the other girls in Las Vegas. “Today is all about just Chantal and I,” says Brad. ‘Cause spending a day pretending there’s no one else still in the game will TOTALLY answer his questions about her ability to play well with others.

“All I can do is hope that Chantal gets attacked by monkeys,” says Michelle. “Or apes.”

For their date, Brad and Chantal take a helicopter ride to the longest zip line in the world, where it immediately starts to pour. B and C jump on the line anyway (they’re so crazy like that!), first one at a time and then tandem. “This is what we would do in real life,” says Chantal. It’s unclear, but we hope she means, you know, on vacation. Otherwise, Brad could be in for a seriously demanding (not to mention expensive) relationship.

After drying off and dressing up, Brad and Chantal settle in for a private outdoor dinner of hard to identify “local fare” (ie: coconut). Cue the rain! Brad grabs the rose, grabs Chantal’s hand and makes a run for his suite, where Chantal promptly changes into one of Brad’s white button down shirts. And nothing else. Very Tom Cruise. Very…Vienna. They share some dessert, some kisses, and some therapy blabber sweet words, and Chantal ends the night with a rose.  “I did fall in love with Brad tonight,” she says.

Jackie, Michelle, Emily, Ashley, Shawntel, and Britt: Love Springs Eternal
Group date! This week’s cluster-fun is all about “adventure and facing fears.” Because the torture never ends! Brad takes the women repelling down a waterfall, which is terrifying for everyone—that is, everyone except Michelle. She’s too pissed to be afraid. “Brad and I made a pact,” she explains. “We made a pact that we would never repel down another building with anyone else.”  Unlike us, Brad remembers their deal and repels down the rainfall by Michelle’s side, which makes Michelle really happy and the other women not so much. “They’re even wearing the same thing,” says one of the women down below. “”I think they called each other up this morning,” says another.

Not that their jealousy stops them from stripping down to bikinis at first chance, which comes by the way of natural hot springs round the corner. After leading a group toast with champagne glasses apparently made for munchkins, Brad spends some time with Jackie and with Emily, who maybe sorta tells Brad she has this little habit of sabotaging relationships, and with Michelle, who ruins everything for everyone everywhere by telling Brad that Chantal isn’t right for him, ruining his mood, and making it so that he refuses to hand out a rose.  Sort of a bad move, right? Not if you ask Michelle. “If he can’t make a decision, I’ll be forced to take things into my own hands,” she says.

Meet Me At the Altar
Chantal: “Alli, how do you feel about your date card not saying anything about love?”
Alli: “This is better than love. This says marriage.”

A for effort (and extra credit for the perfect comeback) but WRONG! This date card, like all date cards before it, says agony. And how! First Chantal attacks her with a giant black beetle, and then, for their much awaited one-on-one, Brad picks Alli up on a horse and guides her across a marsh to a cave that’s over 40 million years old for some spelunking. You know the part on the Indiana Jones ride at Disneyland where the car stalls, air hisses, and a spotlight reveals a wall covered in bugs and insects? It’s like that.  And Alli’s afraid of bugs. Romantic! After what feels like days, Alli and Brad reach “the altar,” a small landing atop a natural stone staircase where they stop just long enough to enjoy some wine, presumably before having to head back out the way they came.

Then they meet for dinner, where they touch on topics like Europe, Austin, living in big cities, sinking, and Alli’s last relationship, which ended when she couldn’t imagine a future with her boyfriend. Unfortunately, when talking about her ex, Alli puts into words how Brad feels about her, and so he ends the date without giving her the rose. Brad walks Alli out (and out, and out—what, they couldn’t have had dinner any closer to an exit?) and she’s classy and sweet throughout. “I’m glad I met someone like Brad,” she says, fighting back tears. “I’m going to miss him a lot.”

After the date, Brad’s happy to have some time alone to decompress. Except, knock knock. Who’s there? Crazy Eyed Killer, er, Michelle, who has invited herself over to tell Brad in what order he should send the other women home. “If you end up with Chantal, it will be a huge mistake,” she says as Brad turns white. “But, like, it’s up to you.”

Finally, it’s time for a Rose Ceremony. There, Brad plays the silent game (makes out!) with Shawntel, touches base with Emily (who takes that whole sabotaging thing back to reclaim her halo, huzzah!), tells Michelle’s she’s scaring him “badly,” and spends some with Chantal, who tells Brad she’s in love with him before Chris Harrison calls an end to all the fun.

See you next week in Anguilla!