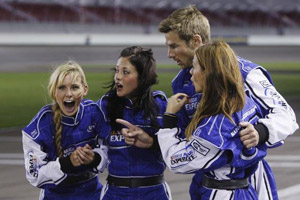 “Ladies,” says Chris Harrison, looking more himself than ever in a simple, untucked button down (what was with that cardigan last week?), “everything is about to change.” And with those six words, the episode is off and running—and so are the women, who wave buh-bye to L.A. and greet Las Vegas with squeals. Except Michelle, who greets Las Vegas with pouts and dirty looks. She’s ready for more girls to go home, she says. She needs the space for her luggage.

Brad arrives in Vegas too, and he’s welcomed by a honcho from the Aria who says he is “honored and privileged” to have Brad at the hotel. This is Vegas, so okay, whatever. For his part, Brad’s feeling a bit confused. He’s questioning his relationships (finally!). So he’s happy to “spend a week in Vegas trying to figure some things out.” Ha! Haha! If only Sin + City = Clarity. Also, he wants the women “to feel the energy of the city.”

Shawntel N., Let’s End Tonight With a Bang
Brad’s only one-on-one date this week goes to Shawntel N., who jumps into Brad’s arms when she sees him because that’s like their thing. Shawntel’s never been to Vegas. She’s from Chico, CA, which she vaguely dismisses as a “really small town,” likely offending the 87,712 other people who live there. So for her, going on an unlimited shopping spree at the Forum Shops is a total fantasy. [Ed note: We’re from L.A., population: 4 mil, and we would have died] Shawntel and Brad run around the mall, stopping only to try things on, tell each other how great they look and yell “put it on the counter!” “It was definitely the beginning of something serious with Brad,” Shawntel says of the first half of her date. Like a credit problem.

After a quick stop back at the women’s suite where Shawntel and her many purchases make the other women turn green, Shawntel’s off for the second part of her date: a private rooftop dinner and fireworks show with Brad. Over dindin, Shawntel tells Brad about her career as a funeral director/embalmer. She says phrases like “think of all of our orifices,” “vein drain,” “you don’t want leakage,” and “I’m gonna eat while I’m talking,” which makes the champagne bottle chilling at the side of the table so queasy it pops its own cork. But Brad likes getting to know her, and so he offers Shawntel the rose and picks her up to swing her around for the fireworks display.

Back at the suite, the women are feeling “stressful.” Or, as Ashley S., who seems to lose five years with every episode, puts it, “I feel like I’m going to pee my pants.”

Lets Go Speed Dating
For the group date, Brad takes Jackie, Emily, Lisa, Marissa, Alli, Chantal, Britt and Michelle to the Las Vegas Motor Speedway to drive NASCAR race cars. Everyone is super excited—except Emily, who is politely devastated, and Jackie, who is the only woman sensitive enough to realize what’s actually going on: Emily is being cruelly exploited by the show having a hard time because her late fiancé was a race car driver. Once Emily helps Brad put two and two together, he offers to have everyone leave the track. Which earns him a few points and inspires Emily to let go of her past by facing it head on. She rides around the track for the chance to “start something new with somebody new.”

At the after party, Brad pulls Emily aside to tell her that the hole in her life is going to be a hard to fill. Alli then breaks down to Brad because she doesn’t have such a sob story, er, because she doesn’t feel special. God only knows how that’s resolved. In the next clip, Brad is sitting with Chantal, who blurts out that she loves him and that he should take her out of her misery and send her home if he doesn’t have feelings for her too [translation: I downed one too many vodka sodas while you were busy talking with all those other girls!]. There are tears and hugs and hugs and tears but Emily gets the rose. “I don’t care about anything in your past,” Brad tells her. “I care about you.” (!!!)

Ashley H. and Ashley S., Come Swing With the King. –Brad.
Two Girls, One Rose. One Stays, One Goes. –Chris
It’s the dreaded two-on-one date, and Brad takes the Ashleys to a rehearsal for Viva ELVIS by Cirque du Soleil where—SURPRISE!—they find out one of them will be performing with Brad in that night’s show. They do their best to act excited/shocked, but its clear both Ashleys watched The Bachelorette last year (hello Ali and Roberto!) It’s also clear, after a few hours of rehearsal, that Ashley S. is having some sort of melt down. “It’s a huge competition with myself,” she says. No honey, it’s a competition with Ashley H., who’s a little unstable and carries around an oversized teddy bear. You could take this one if you tried!

Over “dinner” (it’s unclear if there was ever any food on that table), Brad follows his heart and gives the rose to Ashley H. “You’ll make an extraordinary wife,” he says, “but not for me.”

It’s been an emotional couple of days, so in the morning Brad calls his therapist, Jamie, who tells him, “Your loyalty is not to any of the girls. It’s to the mission.” They talked for a few more minutes, and Brad claims Jamie said something profound, but I have no idea what it is because I was thinking about missions—missions to Mars, the California missions, The Blues Brothers…

Later that night Brad heads over to the women’s suite for a rose ceremony. He talks with Chantal about the same old thing, goes out of his way to make Alli feel “special,” sits as far away from Britt as he can while talking to her, and actually spends his first five minutes with Marissa, who gives him an envelope full of little notes. Then Michelle sits him down and sits on him for some bizarro dominatrix-style brainwashing, which comes across scarier and less sexy than she (we think?) intended. “I think we should go send some girls home now,” she says. “The next time we’re together you can talk.” Luckily, Brad is saved by Chris. It’s time for the rose ceremony.

See you next week!