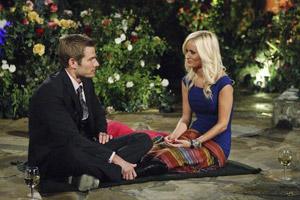 This episode of The Bachelor opens with what I believe to be a series first: a black eye. No, there wasn’t some brawl in the house, and no, no one ended up in the hospital (the show has been there, done that!). Michelle just inexplicably woke up with a neatly drawn dark, er, nicely bruised right eye. “It’s just something that would happen to me,” she says. Like she’s overslept. Or lost her keys.

Which isn’t to say that Michelle’s black eye doesn’t make her special. “Today I woke up with a black eye,” she says. “So I think I deserve a one-on-one with Brad.”

How Deep is Your Love?
Except, this is The Bachelor, Season Fifteen, where instead of getting what you think you deserve, you get your biggest fear and mascara running down your face. So Brad’s first one-on-one date—a trip to Catalina Island—goes to Chantal O., who puts on her best American Apparel T-shirt for the occasion.

“I’ve been waiting to take Chantal on a date for so long,” says Brad. Ed note: Probably about a week. Still, Brad and Chantal seem genuinely thrilled on their way to Catalina. Things take a turn for the worse when they arrive and learn they’ll be walking along the ocean floor. “It’s a huge thing to ask me to get in the water,” says Chantal, seemingly offended. “I don’t just do that.”  HA! Except, it’s not the bizarre moral reaction it seems. Turns out Chantal is terrified of the ocean. Still, in an effort to show Brad that she’s “willing to take chances for him” she does her best Jacques Cousteau, even feigning interest in exploring a bit of seaweed floating rather sadly near a reef.

After their adventure, Brad and Chantal settle in on a daybed set up for a private dinner on the beach, which Brad describes as “almost perfect.” (Producers: You know, Brad has a point. Were there no Jacuzzis available on Catalina Island? Was there absolutely no cotton candy to be had? You know he loves that. Act like you care, okay?) Somehow, Brad and Chantal suffer through your average romantic dinner for two on the beach with conversation, a make out session, and the giving and the receiving of a rose.

Lets Put Our Love On The Line
To be fair, Brad tortures Ashley S., Stacey, Lindsay, Britt, Meghan, Alli, Lisa, Ashley H., and Jackie next by taking them to be in-studio guests on “Loveline” with Dr. Drew. “I want to give the women a safe space to open up,” says Brad. That, or a direct connection to the next season of Celebrity Rehab. Stacey, who we don’t think we’ve never seen before, gets nervous. Lindsay, who looks vaguely familiar, says she feels fine because she has “nothing to hide.” Yeah, it’s that kind of date.

Back at the house, Michelle plots revenge—against the girls for stealing her man, against Brad for not giving her a date, and—you can see it in her black eye—against you and me for just existing. Ashley S. offers Michelle this gem of comfort: “It’s only going to get harder.”

Lets Hang Out Together
Michelle’s threats of physical violence against Brad should he not take her on a date are finally answered when a one-on-one date card with her name on it arrives at the house. “Didn’t all the other cards have the word love in them?” asks Chantal. Still, Michelle’s ire is reserved mostly for Ashley H., whose emotional breakdown on the group date leads Brad to pull her aside before taking Michelle on her date.  “I would elbow Ashley H. in the face,” says Michelle. Did we mention she’s a mom?

Anyways, proving that there is enough torture to go around, Brad takes Michelle, who is afraid of heights, repelling off the side of a building. It’s all very Jake and Vienna. Or Ali and Roberto, if one of them were nuts. So you know what happens next. Brad and Michelle are so happy when they hit the ground they jump into the pool with their clothes on and make out before dinner. “You’re a mature woman,” says Brad before asking her if she would allow him to meet her daughter. Who, the guy who is dating 13 other women? Of course she would! Anytime! Blinded by adrenaline, Brad gives Michelle a rose.

Back at the house for the cocktail party, Brad puts in quality time with each of the women who “missed out” on a date this week. His picks Shawntel up and swirls her around, gives awkward dating advice to Meghan, and—much to the chagrin of the other ladies—recreates for Emily their vineyard date with a blanket and some pillows (cute!). “It’s important for me that you know you’ve been on my mind,” he says. Emily then shares a super cute story about leaving behind dollar-store presents for her daughter (enough for Ricki to have one every day that she’s gone!) and tells Brad she “hopes she can live up to” his impression of her.

Elsewhere, Chantal is crying. I think because she packed the wrong shade of eye shadow (did she mean to grab sky blue?) but maybe it’s because she now sees Emily as a threat. Brad takes a few minutes to reassure her, and then it’s time for the main event.

See you all next week!