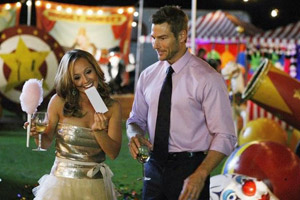 We’re down to 20 women, and when you’re dating over 15 people there’s really no time to reminisce, so after just a sentence or two from Brad about how he deserved to be put through the ringer by the women on night one—you know, a little self hatred to set the tone—we’re off and running with a date card.

The Road to Love is a Wild Ride
First up for a one-on-one date with Brad is Ashley H., who, the producers kindly remind us, is a dentist. Brad picks her up at the mansion (where beach attire is apparently now required even after dark) and whisks her off to a super dreamy deserted and unlit dirt road. “It’s like something out of a horror movie,” she says. Exactly what we were thinking! Except, instead of the scene fading to black and then Goren and Eams stepping in to do their thing—which would have been a pretty spectacular twist by the producers—Brads tells Ashley to flip a giant switch which illuminates a private amusement park set up just for them! Still vaguely creepy, right? Well, Brad and Ashley don’t mind at all. In fact, it makes them feel like little kids again! Which is perfect, really, because Ashley’s dressed the part in gold lame and yellow tulle. Between rides and games, Ashley and Brad enjoy all the classic amusement park snacks, like cotton candy and wine. Then they sit down to talk. “This is the best date I’ve been on in years,” says Brad. “Me too,” says Ashley. “So tell me about yourself,” says Brad.

It turns out that Ashley and Brad both have absentee dads who never took them to amusement parks when they were little. So, after a little bonding and rose giving and receiving, they kiss and take the Ferris wheel for a spin before calling it a night.

Let’s Share Something From the Heart
Brad’s second date this week is a group date with 15 girls. “I’d be willing to bet this is a world record,” says Emily. We’d be willing to bet it’s not, given the cocktail party he had with 30 women just two nights ago, but who’s counting.

Oh—Michelle is! It’s her birthday. She’s 30. “Not 29. 30.” And she’s really not happy about sharing her special day with anyone other than Brad. So when he reveals that the group will be filming public service announcements for the Red Cross, her heart does not go pitter pat. Madison’s probably does, but for a chick with fangs she comes across as shockingly uninteresting on this pro blood donation date. Instead it’s Keltie, who is delegated the role of “Butch In The Neck Brace With Two Arm Casts,” and Britt, who claims to be “a big old prude,” before jumping Brad during their scene, who really steal the show.

And that makes Michelle cry. Um hello! It’s her birthday! She’s 30! To make it better, Brad gives her some alone time at the after party for the shoot. “You have walls,” she says. “I fell like we need to dissect you.” And, because he’s a sucker for being told that he has issues, Brad rewards her with the rose.

Jackie, Let’s Get Our Love On Track
Next Brad takes Jackie on a Pretty Woman-themed one-on-one. He picks her up in a swanky car, takes her to The Peninsula in Beverly Hills (what, was the RegBevWil all booked?) and treats her to a spa treatment (“Get in a robe and relax”) before dropping her off in The Room of a Thousand Gowns. There, Jackie picks out an outfit from multiple racks of dresses and shoes and has her hair and makeup done by a team of (we hope) professionals.  Brad tops off her new look with a Neil Lane necklace, then takes her to the Hollywood Bowl, where Jackie’s name is on the marquee. “Look!” he says. “Your name is in lights—literally!” Jackie’s an artist from New York, so she politely ignores this comment.

Over dinner, Jackie reveals that she’s only had a few serious relationships, which freaks Brad out because he’s looking for someone with more experience  who can really open up. Jackie assures him that she can, and, after giving her the once over one last time, Brad gives her the rose. And Thank God! Otherwise Train would have been stuck in the wings unable to give them a private performance.

With all that pesky date card dating behind them, the girls and Brad settle in to another cocktail party. Or, they try to, anyway. But before they can do any settling at all, Michelle pulls Brad away to ask him an urgent question: “Starbucks or Coffee Bean?” He likes Starbucks (and keeps turkey and eggs in his fridge, in case you were wondering) but that scintillating new information doesn’t keep Raichel and Melissa from yelling jibberish at each other and then both crying about it to Brad. To their credit, this episode was tapped before this study came out.

Luckily, Chris breaks in before anyone loses an implant, and he brings Ali and Roberto with him to help Brad determine which of the women are “there for the right reasons.” Melissa uses the opportunity to shed a few more tears, but it’s Emily who gets the Aliberto Rose.

And it’s time for another Rose Ceremony.

We’re not making any connections yet, but Brad feels certain he’s on his way to finding his wife.  So see you next week!