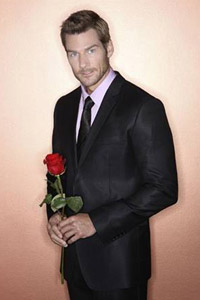 Happy New Bachelor everybody! Er, Happy New Old Bachelor? Whatever! The Bachelor is back, and so is footballer/ex-convict Michael Vick entrepreneur Brad Womack, who is getting his second chance after famously rejecting all 25 women he met as The Bachelor back in 2007.

Unable or unwilling to open a season without underselling it, host Chris Harrison introduces “one of the most shocking seasons in Bachelor history” by launching into the most depressing Bachelor sales pitch ever. We see Brad and he looks sad. You think you dislike Brad Womack? Brad Womack dislikes Brad Womack more, and he can prove it. Brad Womack gives Brad Womack panic attacks. Brad Womack reads about and watches Brad Womack on The Bachelor Season 11 in disgust. Brad Womack picks on Brad Womack in the comments field on blogs. Brad Womack is “broken, badly.” That is, until Brad Womack goes to therapy, puts on a feathered headband or two to entertain his niece, and lifts weights—a lot. Today Brad’s the perfect Bachelor. His therapist even says so!

Except, while we’re digging down deep and all, I should admit that I didn’t think Brad Womack was too dreamy before he sent both Jenni and DeAnna home ringless three years ago. And when he did, I respected his decision. Nothing—no seriously, nothing—is worse than a Bachelor engagement that’s called off as the finale credits roll (ahem Jake and Whatsherface), and Brad very clearly explained back then that he simply hadn’t found The One. You know, THE ONE. The One people spend a lifetime looking for. Not the one people pick out of a preselected group of 25 like you had to do that time dad drove you two hours to a breeder’s shady compound so you could select the runt of a litter because you had to have a puppy, like, that minute. But oh well. The Brad who thought the perfect girl was worth waiting for—and worth disappointing the viewing audience to find—is dead. Therapy killed him, and then, just as this new season gets underway, DeAnna and Jenni show up to kick dirt on his grave.

And now the women are on their way! “Don’t screw this up,” says Chris. “Let the journey begin.”

Enter ladies with—no kidding—scalpels. There’s Ashley S., a dentist who wishes Brad “fun, romance, and healthy gums,” and funeral director Shawntel, who has designs on Brad’s literal burial, just in case his figurative one wasn’t painful enough. There’s also Ashley H., who wears cotton sundresses in the rain, and Chantal, a car dealer who turns out to be a divorcee with two cats and a dog, Raichel, who is a professional manscaper, Madison, who may or may not be a vampire (she’s mysterious), and Emily, the prettiest, sweetest widow from the South maybe ever.

Good thing Brad has that therapist on hand. Half an hour, thirty dirty looks, and one slap across the face later, everyone’s off “to talk more inside,” and the talent portion of the competition commences.  After some high kicking with Keltie and some impromptu serenading from Jackie (Kasey, are you watching? This chick totally needs someone to guard and protect her heart!), Brad tries to get to know Madison, which is really hard to do because she’s so different and so unique. “Wait. Are you wearing fangs?” he asks her politely. “They are a little sharper than normal,” she slurs in response. “The girl has fangs, OK? OK?” Brad asks later into the camera. Yes, Brad. It’s OK. We get it. We won’t think you’re still the worst guy in America if you break up with Madison because she’s undead. In fact, we want you to break up with all of the girls except one. Are we clear?

Good, because it’s time to hand out the First Impression Rose, which goes to Ashley S. for being “so sweet,” and for The First And Least Interesting Rose Ceremony.

See you next week. Maybe bring some garlic.