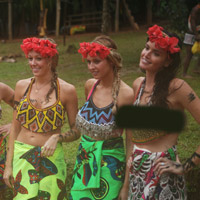 This week’s episode opens with Public Enemy #1, Courtney, sweetly recalling her skinny dipping sesh with Ben in Puerto Rico. “It was so… romantic,” she gushes. Emotions—and the level of derangement openly on display—only increase from there.

Ben greets the women in Panama City by telling them there are “signs of love in the air.” We’re pretty sure he’s just high on a mix of bad perfumes, but you can’t fault him for Being Open.

Kacie B. Will Our Love Survive? Pack Three Things.

The first date card goes to Kacie, and the way she sees it, “this could be the date that changes the rest of my life.” Ben wants to see if his feelings for her are still there, so he whisks Kacie off to the deserted island of San Blas, Panama. (Helicopter Count: 5.)

Once they’re alone, Kacie and Ben reveal what they’ve brought with them to the island.

Her: Monkey man (no clue), a corkscrew “MacGyver” tool, and a bag of candy.
Him: A machete, fishing net, and a set of matches.

Apparently, the date isn’t about actual survival (could you imagine if there was a reality show about THAT?), but about teamwork, compatibility, and coconuts. Except in the reverse order.  “If we can accomplish this together, we can do anything,” says Ben. We think he means on vacation.

Before long, Kacie and Ben have caught a fish, picked some banana leaves, and started a fire. Impressive! Even more impressive: they cook and eat the fish, and it looks not bad!

Over dinner back in civilization, Kacie tells Ben that she suffered from bulimia and anorexia in high school, and about the lessons it taught her about life and love. Ben responds by telling her how much he appreciates her “guts” (no insensitivity intended, we’re sure) and the couple shares a very sweet and touching moment.  “On a scale of one to wonderful, today was fantastic,” she says, glowing.

And oh! She gets a rose.

Next Ben takes Nicki, Lindzi, Casey S., Courtney, and Jamie on a jungle boat cruise just like the one at Disneyland, minus the animatronics and plus real rain. Around the bend, the group “stumbles upon” a village that just so happens to have prepped exactly the right number of tribal outfits for Ben and the gals to play a rousing game of Cultural Appropriation. While the other women layer short, beaded tops over their bikinis, Courtney takes the opportunity to go essentially topless.

“I’m bare chested under this thing” she tells the girls.
“Why?” asks Emily.
“Cause, you know.”

Ten blurred out images and one big, black hilarious censor bar later, Courtney makes everyone even more uncomfortable than they already are by painting her initials on Ben’s back with body ink.

Lindzi, who “doesn’t believe in fighting,” takes advantage of her alone time with Ben that night by telling him normal Bachelor contestant things, like, “I cried over us.”

Courtney, on the other hand, tells Ben she’s in room 1611, then proceeds to camera bomb him while he’s talking with Jamie. She strips, prances, splashes, poses, and performs a one-man synchronized swimming routine all in his line of sight. Poor Jamie. God only knows what she was talking about during all of that, and if He doesn’t, we couldn’t blame him.

Later Emily, who is feeling generous after some positive alone time with Ben, apologizes to Courtney for making a rash judgment and tries genuinely to make amends. Courtney accepts the olive branch with all the grace she can summon.  “We  will never be friends,” she tells Emily, flatly. “And I don’t respect you.”

In the end, Lindzi gets the rose! So maybe God was listening after all.

As for Ben, he says it was a really, really special day. One he does not end with an illicit stop at room 1611.

Save The Last Dance For Me

The first two-on-one date goes to Blakley and Rachel, and Blakely is so, so excited. Rachel looks like she’s going to throw up. Or hop a cab.

When the ladies and Ben arrive at a salsa club for a dance lesson, Blakely, a VIP hostess, seems right at home. Then she changes into an “unbelievable” salsa dress, one that’s hot pink, ruffled, and strapless with some sort of metallic print. In short, it’s ominous, and despite being a more sensual dancer than Rachel is, Blakley seems nervous and anxious and more than a little sad by dinnertime. “It’s strange to be at a table with two different women,” says Ben, ever moving the action forward.

Alone at last, Rachel tells Ben that she wholeheartedly wants to stay. Then Blakely ups her ante by bringing out what appears to be a journal and very unfortunately turns out to actually be a scrapbook she’s put together to illustrate the life she’ imagines sharing with Ben. Ben’s polite but distant, and when he ultimately gives Rachel the rose, Blakley pulls a Ben, storming off without giving him the chance to explain his decision. OK fine, she caves and hugs him and cries and holds on for dear life in the end. But at first, she made us proud.

With three dates done and ten minutes of airtime left to go, Chris Harrison drops by the ladies’ suite to talk to Casey S. Uh-Oh! “It was brought to my attention by three different people back in the United States that you are in love with somebody else,” he tells her. Casey leans right, then left, then ultimately says “yeah” with about as much gravity as deep space.

Together, Casey and Chris go to fill in Ben, who may or may not remember who Casey is without a second introduction. “The heart wants what the heart wants,” he says, unmoved whatsoever. ”Itjustsucksthatitsstillnotgoingtowork, youknowwhatImean?” she sobs.

It’s time for a cocktail party at last.

Courtney is feeling as if she might be going home. “JUST KIDDING!”

Jamie, desperate to connect with Ben after failing to get his attention on the group date, pulls him aside for a little makeout session. She seems like a nice girl, but we all know bad things happen to nice people, and in this case, it’s not bad, it’s tragic.

Forgetting what’s she’s wearing, (a pink stretch satin mini that’s tight around the bottom) she straddles him, nearly ripping her skirt. Oops! Then she drops in for the kill with a smooch. Ben’s so surprised he laughs, then pulls away, then laughs again.

The kiss “wasn’t what she imagined,” so Jamie tries to fix the situation—by instructing Ben when to keep his mouth open and when to keep it closed for their next kiss.

Only a flash cringe mob could express how uncomfortable things got next, and because we couldn’t bear to continue watching what was happening on screen, we went online to find one for hire… Did you know there’s no such thing? Says Ben, “I can’t even handle this right now.”

And folks, we’re all out of time.

See you next week in Belize!