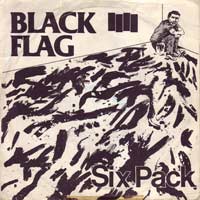 MOCAtv’s newest documentary series, The Art of Punk, explores this intersection of art and music with three micro-docs, each of which focuses on the iconography of an influential punk band. Created by Los Angeles-based writer/artist/filmmaker Bryan Ray Turcotte, The Art of Punk is both an oral history and an exploration of visual symbolism.

The first episode, released on June 11, takes a long look at Black Flag’s logo, which was created by artist Raymond Pettibon. The 22-minute film features interviews with with Pettibon, Black Flag band members Keith Morris, Dez Cadena, and Henry Rollins, and Red Hot Chili Peppers bassist Flea, who discuss the logo’s impact on their own lives.

The final episode, which comes out next Tuesday, will delve into the iconography of the American hardcore band Dead Kennedys.