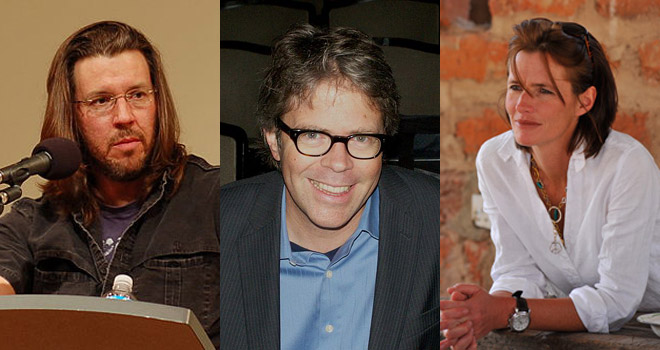 You talk in your profile of Kem Nunn about how writers tap into a society’s sense of anxiety. Who are the writers who have done that most hauntingly?
One great source of anxiety that becomes especially clear in literature is when people or whole cultures are not living up to their highest potential in terms of kindness, generosity, empathy for others, that sort of thing. Failing to evolve. There it is on the page in black and white, like a contract. E.M. Forster captured the deep fears of colonialists—the grasping for control in public and private lives.

Alice Munro finds the everyday anxieties of characters who are trapped in small worlds, small routines, and women trapped in lives over which they have little control. This is interesting because Munro grew up and lived her entire life within a 50-mile radius. Also, she once told me that she knew she had to leave her first marriage when she found herself unable to breathe.

Chekhov writes of the anxiety of people living at the end of an era who know deep down that, as Kem Nunn’s Eldon Chance is fond of saying: “History is coming for the empire.”  For me, Martin Amis has captured the insecurities and anxieties of people who are always measuring themselves against others; people who have no real idea of where they fit in the world, and so they must, continually, look around to see where everyone else stands.

W.G. Sebald also plumbs this “who-am-I-really” anxiety. His narrators look for that self everywhere—in childhood, in unfamiliar neighborhoods, lost opportunities.

So, anxieties born of colonialism, gross income inequality, unequal rights for men and women, and the creeping inhuman commercialization of culture are generally nipping at these writers’ heels.

Is there one book that describes the current American zeitgeist the best?
No. I think Chance comes pretty close. The main character has a hard time knowing whom to trust, and I think we are all in that position all the time. Someone is always trying to sell us something.

In my generation, many people felt/feel that Pynchon, David Foster Wallace, and Jonathan Franzen are the kinds of writers who capture current American anxieties in print. For me, these are not necessarily the same anxieties that women feel. Alice Munro, Francine Prose, and Rebecca Solnit jump to mind, because they capture that limited world/suffocating feeling of being hemmed in by boundaries you don’t set yourself. Writers like Solnit, Alexandra Fuller, and Terry Tempest Williams write about ways to bust out.

So, if these writers are exploring our sense of unease, does that mean they are nervous wrecks?
Yes, pretty much. I think the writing helps them wring it out a bit, however. Good writers are lightning rods, and I know for a fact it isn’t much fun for them a lot of the time. How would you like to capture and distill the anxieties of your culture? It’s hard enough parking your car in the Whole Foods parking lot. It’s hard enough trying to get health care, or raising kids and trying to protect them from all that anxiety. Cortisol is bad for you.

When Kem Nunn and I spoke about anxiety, I think he meant the gross imbalances in income, rights, voice in America today. I think he meant how precarious our lives seem—how impossible it seems to be to protect our children from crazy people with guns. He remembered his friend Robert Stone saying “It’s my America, too,” and I think he told me that to illustrate the feeling that look, I may be a writer, my politics may be progressive, I may spend much of my time writing, isolated, insulated, but I still have a right to care about this country. I still get to be a patriot. I still get to have a voice.

To read “When The World Goes Dark,” Susan Salter Reynolds’ profile of novelist Kem Nunn, pick up a copy of the February issue on newsstands or subscribe now.