Home Uncategorized The 5 Funniest Groundlings You Need to Remember 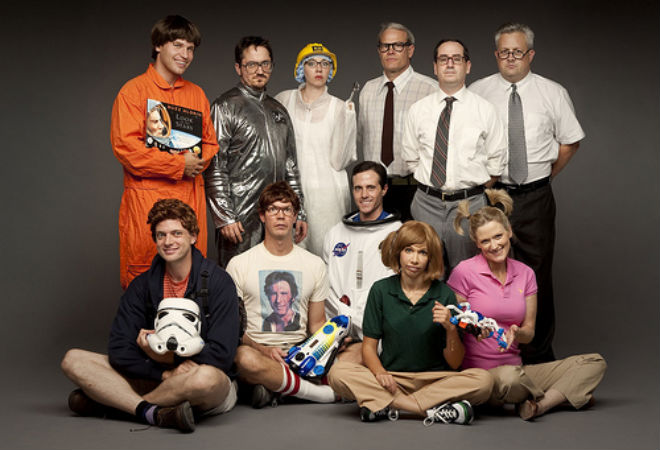 A recent study conducted at the University of Colorado Boulder concludes that Los Angeles isn’t among the top five comedy cities in the country (sorry, but there’s no way Portland, Oregon is funnier than we are). One argument for L.A.’s comedic superiority: The Groundlings. The institution of wacky shenanigans and de facto Saturday Night Live farm team has been supplying the country with comedy gold since 1974.

Throughout the month of May, the improv troupe, which is housed in a theater on Melrose Avenue, will celebrate 40 years of cultivating laughs with a new main stage show. 40 Is The New Groundlings debuts this Friday (May 2), and every Tuesday for the rest of the month the troupe will honor a different decade by inviting legendary cast members to reprise their favorite roles and routines.

The most famous former Groundlings include comedy mainstays and SNL alums Will Ferrell, Maya Rudolph, Kristen Wiig, Will Forte, Phil Hartman, and Conan O’Brien. But the troupe’s roster of talent stretches well beyond that. Here are a few funny folks who got their start at the Groundlings but aren’t often associated with the place.

Jennifer Coolidge
Her unapologetically unhinged characters are a national treasure. Coolidge, who started with the Groundlings in the ’90s, is probably best known for her performance as Stifler’s Mom in American Pie. She has also appeared in a wealth of movies and TV shows including Legally Blonde, Zoolander, Best In Show, Seinfeld, and Sex in the City. A superb character actor capable of derailing any somber moment on screen with her subtly subversive dumb blonde shtick, Coolidge elevates every scene she’s in.

Cheryl Hines
Hines, who became something of a household name thanks to her stint as Larry David’s long-suffering wife on HBO’s Curb Your Enthusiasm, excels at deadpan line-readings, hilarious observations, and a biting wit that her targets don’t see coming. Since performing with the Groundlings in the late ’90s, she has found steady work in television (appearing on shows like Friends and Everybody Loves Raymond) as well as popping up in movies like Along Came Polly. These days Hines can be found on the ABC show Suburgatory.

Pat Morita
To most of the world, Pat Morita is known for his role as wise karate sensei Mr. Miyagi in the Karate Kid movies, but his first love was improv. At the age of 30, Morita, whose stage name was then “The Hip Nip,” quit his job and moved from his native Sacramento to L.A. where he began pursuing a career in comedy. He joined the Groundlings in the ’70s, well before his Karate Kid breakthrough. The qualities that made Morita, who died in 2005, a great actor also made him a great comedian; that calm and quiet demeanor could pull laughs out of viewers when they least expected it.

Paul Reubens
To say that Paul Reubens is overlooked isn’t quite accurate; he’s acclaimed for creating bow tie-wearing, bicycle-loving Pee-Wee Herman. But most people don’t know that he developed his most famous character during his tenure with the Groundlings in the 1970s. The Pee-Wee Herman Show originated as a midnight show at the Groundlings then moved to the Roxy where, in 1986, it was reborn as Pee-wee’s Playhouse, and eventually became and unforgettably surreal part of the late ’80s and early ’90s childhood experience.

Wendi McLendon-Covey
As the co-star (with Jeff Garlin) of The Goldbergs, Wendi McLendon-Covey is getting more screen time these days. She joined The Groundlings in 2002 and remained there for seven years. To movie audiences she is probably best known for her role in 2011’s Bridesmaids (starring fellow Groundlings alums Kristen Wiig and Maya Rudolph), in which McLendon-Covey plays a housewife with a wild side: “Listen, I need a trip that I can fantasize about forever, so that I’m able to have sex with my husband.”