Home Uncategorized The 13 Best Things to Do this Weekend in L.A.: Celebrate the... 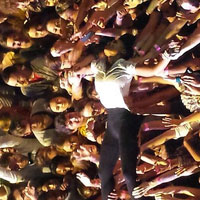 Halloween may be over but Dia de los Muertos is about to hit its stride. This weekend there are a bunch of ways you can bring out the dead. Or you could groove to the glam-funk of Janelle Monáe and place your bets for the Breeders’ Cup.

LISTEN: Art on Screen: A Conversation with Agnès Varda
The Getty presents a rare and intimate conversation with filmmaker Agnès Varda, the grandmother of French New Wave, about her genre-defying art. More information (November 3; Getty Center)

LISTEN: Chris Schlarb’s Twilight and Ghost Stories
Leading musicians from every genre imaginable team up to create a dense 40-minute composition. What happens is completely up to them. Musicians include Mike Watt (Minutemen), Isaiah “Ikey” Owens (Mars Volta), Chris Schlarb himself, and many others. More information (November 1; The Velaslavasay Panorama)

HEAR: Johnny Marr
As a founding member of the Greatest Living British Rock Band That’s Least Likely to Reform, Johnny Marr is a guitar deity. The onetime guitarist of The Smiiths (and official Godlike Genius) brings his Rickenbacker 330 (or maybe his Fender Jaguar) to L.A. this Saturday. More information (November 2; The Fonda Theatre)