Home Uncategorized The 11 Best Things to Do This Weekend: Glowing Lights, Thai Peppers,... 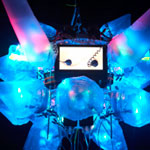 The winds are kicking up and it’s a busy weekend out there in Los Angeles with street festivals, food festivals, and all sorts of strange, fun things to see, hear, and taste.

SEE: GLOW Festival
It’s Saturday Light Fever as the GLOW Festival illuminates the night with works that are beyond trippy. Hanging sculptures of interwoven LED lights and crystals, a giant model train with 15-foot sculptures of a ghost and sea maiden, and large, undulating quartz-like lights perched atop poles are just a few of the works on display. More information (September 28; Santa Monica Beach)

HEAR: Depeche Mode
The British synth pop stars are invading the world’s big arenas in a very modern way with the release of this year’s Delta Machine. Definitely not your typical 80’s nostalgia trip—these guys mix it up by playing the hits along side forgotten acoustic gems and Delta blues-inspired swampy pop. More information (September 28-29, October 2; Staples Center)

EAT: Italian Feast of San Gennaro
Jimmy Kimmel and fellow Italian American funnyman Adam Carolla host a three-day celebration fit for the whole family. Enjoy music, rides, and a round of bocce ball before sampling eats from some of L.A.’s best Italian spots. And of course, no Italian feast would be complete without copious amounts of wine. More information (September 27-28; Hollywood and Highland)

SEE: Metallica Through the Never
Fact blends with fiction in a 3-D flick that captures the larger-than-life antics of heavy-metal gods Metallica. It makes Moonwalker look like a flipbook. More information (September 27 – Octboer 4; IMAX theaters)