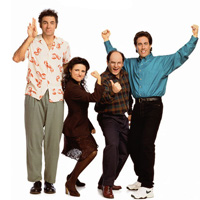 Seinfeld, the classic ’90s “show about nothing,” celebrated its 25th anniversary last week. Most of us remember Jerry and his friends—nebbishy George (Jason Alexander), assertive Elaine (Julia Louis-Dreyfus), wacky Kramer (Michael Richards)—but how about the numerous celebs that briefly turned up in the sitcom? Here are our ten favorite cameos from Seinfeld‘s nine-season run.

Bryan Cranston
Long before he was the high school chemistry-teacher-turned-meth-dealer in Breaking Bad, Cranston was Jerry’s “dentist to the stars,” a guy so shallow he converted to Judaism just for the jokes.

Lisa Edelstein
Best known for her role as Lisa Cuddy in the medical drama House M.D., Edelstein played Karen, one of George’s short-term girlfriends whom he accuses of faking orgasms. Guess romantic frustration pops up in every role she plays.

Jon Voight
Angelina Jolie’s dad played himself in an episode where George thinks he has bought Voight’s convertible—only to find out that it was owned by John Voight. A single “H” makes all the difference.

Courtney Cox
Cox brought a neurotic charm to the role of Monica on Friends. As Meryl, another one of Jerry’s easy-come, easy-go girlfriends, he calls her his wife so she can use his dry cleaning discount. But after he lets another woman use his discount, the relationship goes kaput.

Teri Hatcher
Before she was one of the Desperate Housewives, Hatcher turned up as one of Jerry’s paramours, Sidra Holland, a woman who everyone remembered because of her breasts. Though she only appeared on a couple of episodes, she uttered one of the show’s most iconic lines: “They’re real and they’re spectacular.”

James Spader
The Pretty in Pink antagonist and Blacklist star played Jason Hanky, Jerry and George’s childhood friend. A recovering alcoholic, he shows up to apologize for all of his misdeeds—except his refusal to let George borrow a sweater for fear that it would be stretched out by George’s bulbous head.

Jennifer Coolidge
As Reese Witherspoon’s hairdresser in Legally Blonde and Stifler’s mom in American Pie, Coolidge was a scene-stealer. It was no different when she played a masseuse who refuses to work on Jerry but has no problem giving Kramer a massage in season 5. On top of that, George also finds himself falling for her and leaves his current girlfriend Karen.

Larry Thomas
Though he’s famous as the show’s “Soup Nazi,” Thomas has his fair share of acting roles in other comedies including Arrested Development and Not Another B Movie. Maybe we’ll skip the soup tonight.

Debra Jo Rupp
Remember Eric’s kooky mom from That ’70s Show? Before she was Kitty Forman, Rupp played Katie, an annoying talent agent who often hurt Jerry more than she helped him.

Jon Favreau
Look closely and you’ll spot Iron Man’s loyal friend and driver, Happy Hogan, in a season 5 episode where he plays a clown who gets into an argument with George. The source of the disagreement? An argument about whether or not Eric the Clown knows who Bozo is and how “Eric” is a horrible clown name.