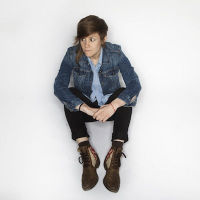 When Cameron Esposito took the stage on Craig Ferguson’s Late Late Show in September of 2013, she didn’t expect to walk out and see Jay Leno sitting next to the host. She was even less prepared for her national TV debut to end with an enthusiastic Jay Leno singing Esposito’s praises and signing off the show with a resounding “Lesbians rule!”

“The whole thing is completely surreal. I can’t believe it actually happened,” says Esposito. “It’s on CBS and they’re comfortable with it and I’m comfortable with it. Just the idea that they could be joking around with me about that shows so much movement.”

Anyone who has seen Esposito perform knows that identity politics and gay rights are an integral part of her act. “Right now I’m mostly yelling about gay marriage,” says Esposito. “I can’t stop yelling about gay marriage! I’m happy that I can talk about something that really matters.” Growing up in the suburbs of Chicago, she often felt like an outsider. “I didn’t know any gay people before I came out. It felt like I was walking into a wasteland of a future without the possibility of having a good life.”

That’s why Esposito is so vocal about who she is. “As a gay person doing this job, it’s important to speak my piece from inside the issue as opposed to having straight people speak for me,” she says. “It’s important that someone who is affected by it is heard. I feel like a lot of the things I’m talking about, and the viewpoint I have, are otherwise absent from the conversation.”

Esposito didn’t always know she was going to be a comedian. In fact, it didn’t seem like a possibility before she joined an improv group while attending college in Boston. “Just the idea that [comedy] was something you could make a living at was foreign to me,” says Esposito. “Amy Poehler had also been in the improv group I was in and she had just started on SNL. That was the first time I thought to myself, ‘You know, you can do this. And by the way, you’ll be on SNL in a second!’”

After college, Esposito moved back to Chicago and started building her career in the city’s well-regarded standup scene. “The minute you start doing stand up in Chicago, people ask you, ‘So when are you going to move?’” she says. Like the city itself, Chicago’s comedy scene is famously hardworking; according to Esposito, the only way to remain relevant is to constantly perform live, which can take its toll. “It’s exhausting and it’s not really sustainable. You can’t go out every night of the week for the rest of your life.” That said, Esposito has a lot of love for her hometown. “People like Pete Holmes, T.J. Miller, and Kyle Kinane, who are coming up in the national spotlight, are people I used to see every night of the week.”

Since her relocation to L.A. a year and a half ago, things have moved at a rapid pace. Esposito recently started writing a column for The AV Club, “Who In The World Is Cameron Esposito?” and since January 2013, she has hosted the hugely popular weekly show Put Your Hands Together on Tuesday nights at UCB Hollywood. “It’s very reflective of all the amazing talent we have here in L.A.,” Esposito says. “We’ve had Bob Odenkirk, Kristen Schaal, and Aziz Ansari on, but we also have a lot of newer comics who we are trying to promote like Ron Funches, who is about to break into the national spotlight.”

When discussing her career highlights, Esposito always returns to that night on the Late Late Show in September. “It got a lot of attention from the media, obviously, but I keep thinking about if I was a gay teenager and I saw that, my experience of my future would be so different,” she says. “If Jay Leno says you’re going to be okay, you’re going to be okay.”