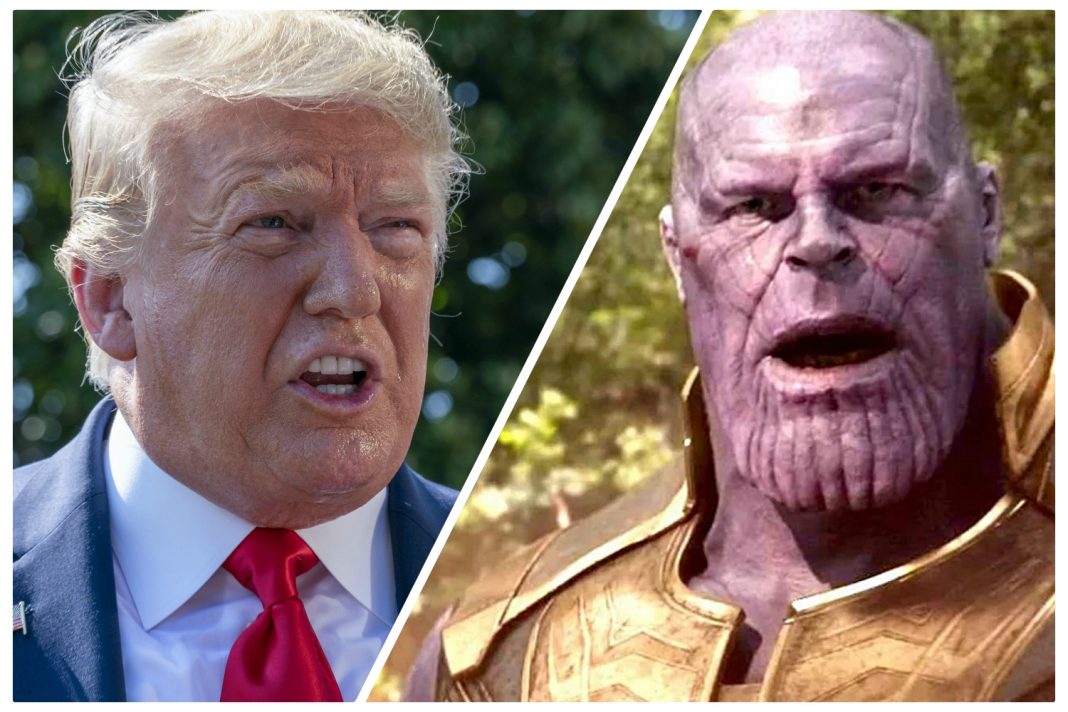 The internet is shaking its collective head in the wake of a new viral campaign ad from Donald Trump’s reelection team that casts the president as Thanos in a key scene from Avengers: Endgame. Replacing the Mad Titan’s head with Trump’s, the bloated despot dusts top Dems with a snap of his fingers as they announce the articles of impeachment.

“I am inevitable,” Thanos’s voice says over a tweet reading, “House Democrats can push their sham impeachment all they want. President Trump’s re-election is inevitable.”

The meme makes no sense to anyone who has even a mild interest in pop culture, as social media users are gleefully pointing out.

First of all, Thanos is the bad guy, an intergalactic mass murderer bent on killing half the population of the universe. This means that Nancy Pelosi, Adam Schiff, and the rest of the House Dems are, in fact, the Avengers, the ragtag band of heroes who will sacrifice and suffer to save humanity from the discolored, hate-filled megalomaniac.

So… Pelosi is… Iron Man? Not sure you thought this one through.

Secondly, Thanos loses. He’s a loser. In the scene immediately following the moment
featured in the ad, Thanos and all his skittering, groveling minions crumble in the wind, erased from existence.

Another troubling detail Trump’s team seems to have overlooked is that, like Trump, Thanos also has two daughters, Nebula and Gamora. Nebula, though she works hard to win his affection, only receives his attention when he is torturing her for not being as good as her sister. Gamora, on the other hand, is the psycho’s pride and joy—until he finds a way to trade her for more power and proceeds to toss her off a cliff to her death.

Perhaps no one finds the viral campaign more desperate and depressing than Jim Starlin, the comic book legend who created Thanos in 1973.

“After my initial feeling of being violated, seeing that pompous dang fool using my creation to stroke his infantile ego, it finally struck me that the leader of my country and the free world actually enjoys comparing himself to a mass murderer,” he wrote on Instagram.

“How sick is that? These are sad and strange times we are going through. Fortunately all things, even national nightmares, eventually come to an end.”

RELATED: Donald Trump Has Decided That Hollywood Is Racist Against Right-Wingers