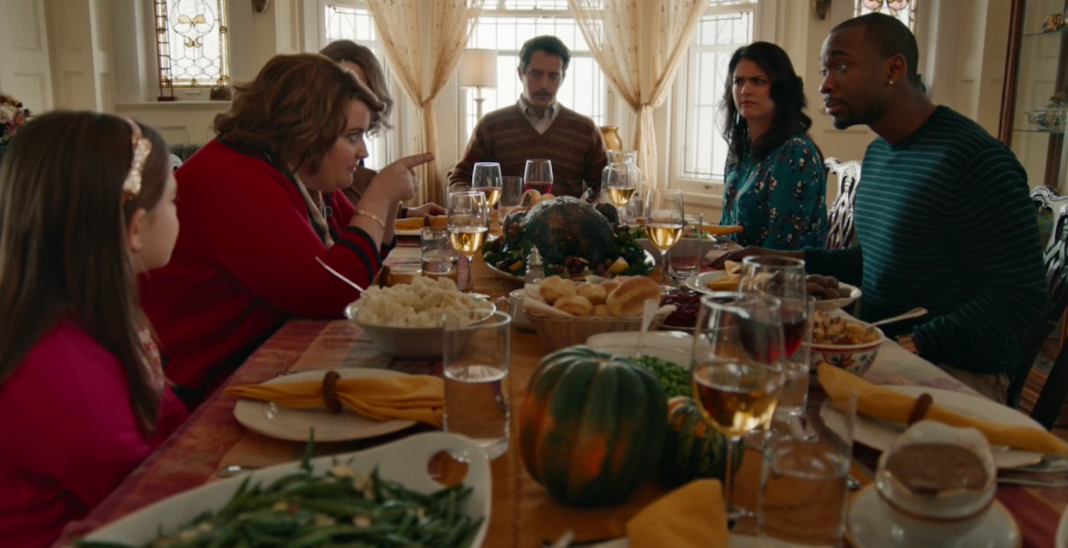 Here they come – all those articles about how to talk to our families at Thanksgiving. Because we simply must have a strategy before we break bread with a Republican. So before we travel back to High School Football, USA, we skim an article about how to win the conversation with our fictional Uncle Jim who used to work at a fictional factory before it closed because of a fictional trade deal that sent all of America’s fiction to Mexico. Ignore those articles. All of them. They’re full of what got us into this mess in the first place.

We’ve got issues to work out. We’re not going to solve them by treating Thanksgiving like some kind of struggle to overcome, a way to situate ourselves on the right side of history, a chance to wield the turkey leg of social justice while spooning out the delicious cranberry sauce of facts ascertained from credible news sources. If we want to go home and have a positive impact on the world insomuch as one can impact the world in a way that involves sort of watching the Detroit Lions, do the republic a favor. Resist the the urge to spend your Thanksgiving impersonating Rush Limbaugh’s idea of a liberal.

OH, I KNOW…
You’re girding up for a Thanksgiving Day Massacre. You’re ready to tell your Republican family members to go straight to hell because a vote for Donald Trump is a vote for sexism, racism, xenophobia and just plain being a dick. This guy has the nuclear codes? THIS GUY?!? I get it. We have to act. For immigrants and Muslims and women and people with disabilities and members of all marginalized communities who seem as if they’re only going to be further marginalized by the government over the next four years. I agree. We do. But what can we do?

If you’re like me, you’ve been obsessed with not wanting to “normalize this.” You don’t want to signal to everyone that what’s happening – for example, a white nationalist is now an official White House strategist – is OK. You know what would totally normalize this? Arguing with your relatives about Trump the way you argued about Romney or McCain or Bush. That normalizes this. “Your guy is bad” and “you are bad for voting for him” normalizes this. And judging by the number of white nationalists currently advising the president-elect right now, these are not normal times. We need better-than-normal tactics. So when I say don’t be Rush Limbaugh’s idea of a liberal, I don’t mean check your values at the door, I mean check the old game plan. It obviously doesn’t work.

HERE’S AN IDEA. TRY TO…
Listen to people outside of your bubble. Because the bubble is real. I’m from one bubble (Ohio) and live in another (Los Angeles). Back in Ohio, in that bubble, we talk politics at the Thanksgiving table. Actual quote from my great-grandfather: “You can always tell a Republican by his beady eyes.” (Fact check: Mostly True.) The Ohio Bubble comes at politics with a smirk – but it’s informed. More informed than it gets credit for. The L.A. Bubble, meanwhile, takes it all deathly seriously. Everything related to politics is high-stakes, because here the personal is the political, and the government exists to solve all of our problems. Losing an election isn’t like oh, too bad, our team lost. It’s both you as a person, and your beautiful vision for the world, being rejected.

All we’ve heard in the L.A. Bubble for the last year was that no matter what facts and information and stunning revelations about Trump were brought to light, the Ohio Bubble didn’t want to hear it. But how well were we listening to them? When they disagreed with us politically on most any issue we called them racist and sexist and dumb – too stupid to vote in their own interest. We dismissed their point of view without even considering it.

If we want other people to listen to us, maybe we should start listening.

BUT WE SHOULD ALSO LISTEN BECAUSE…
Listening is how you nudge someone to change. Yeah, that sounds counterintuitive. When you listen, the person you’re listening to is more likely to listen to you as well. They won’t hear you, however, if you’re arguing passionately and everyone’s adrenaline is pumping.

Now, I know. I know. I KNOW. This will be hard. You think your relatives are wrong because their decision to elect a human middle finger to the highest office in the land put a lot of vulnerable people in harm’s way – and you’re damn right they did, and they did it either without knowing or without caring, and God only knows which is worse. No one said fixing this would be easy. But ALL we’ve been doing until now is what’s easy – being in our bubbles, lobbing glib dismissals, indulging in our bread and circuses while parts of the country rot for want of jobs and good wages.

Rush Limbaugh’s idea of a liberal is Pajama Boy. (Even though I don’t agree with Rush, I listen to him, because my love of country and wanting to understand it knows no rational bounds.) Pajama Boy was the poster boy for the Affordable Care Act. He wasn’t sitting there in his pajamas, sipping hot chocolate and listening to his family. He was there to Pajama Boysplain Obamacare to his parents, who were probably like, “We’re just trying to eat our waffles, Kevin. Can we talk about deductibles later?” No one likes a splainer – a know-it-all. No one. Rush has red state America thinking we “elites” are a bunch of privileged splainers – and not without some proof.

So when you get someone’s guard down, by listening, the bad move is to rush in with a splain. Oh, you’ll want to go in, full guns-a-splain’n. Splain’n all over the place. Like a Pajama Boy. Then fictional Uncle Jim’s guard will go back up, and he won’t hear you. So you listen, and you keep it civil, and you strategically share ideas and examples – not to convince anyone, but rather just to broaden the discussion, to paint a fuller picture.

Common ground – find it. You don’t like President Obama? Well, I don’t like that he deported 2.5 million people. Oh, you LIKE that about him? OK, then we both agree there are some things to like about President Obama. You like how classy Obama is? You wish Trump was classier? There’s another thing we agree on. Keep going and find these connections. You’re not caving in or kissing ass. You’re building something. We all have imaginations, and our subconscious longs to see dots and make connections. Our brains crave information, because life is chaos, and facts and narrative bring order.

When you find common ground, sometimes — not always, but sometimes — this amazing thing happens where the other person will want to reciprocate and find ways to agree with you. People want you to know they are capable of seeing more than one side of an issue because they want you to know they can connect abstract principles with concrete evidence, too. When someone gets what you’re saying, and sees a new angle, you literally feel it deep in your heart, and I know I sound like someone who has a positive opinion about healing crystals right now but I don’t care because connecting with people is magic.

What we all forget – and it’s amazing that we forget this because it is such a big part of being human – is how we ourselves form opinions. We give ourselves permission, meaning we let our guard down. We absorb new information, meaning we listen. Then we let this information crystalize into a belief.

LET’S WALK THROUGH THAT AGAIN
I open.

The idea takes root because I think of it as MY OWN. During this process – and this is key – I can’t ever think that someone who thinks I’m a complete fool is trying to jam that belief into my skull. I know I’m a fool. I write 1,500-word articles about how human beings should conduct themselves in the vicinity of turkey and sweet potatoes. But I do not need to be reminded.

Joe Donatelli is Senior Writer at Los Angeles magazine. You can follow him on Twitter @joedonatelli and Facebook. He wrote: Don’t You Dare Unfriend People Right Now.