Home Uncategorized The Most Beautiful Documentary of the Year Is Only Playing at One... 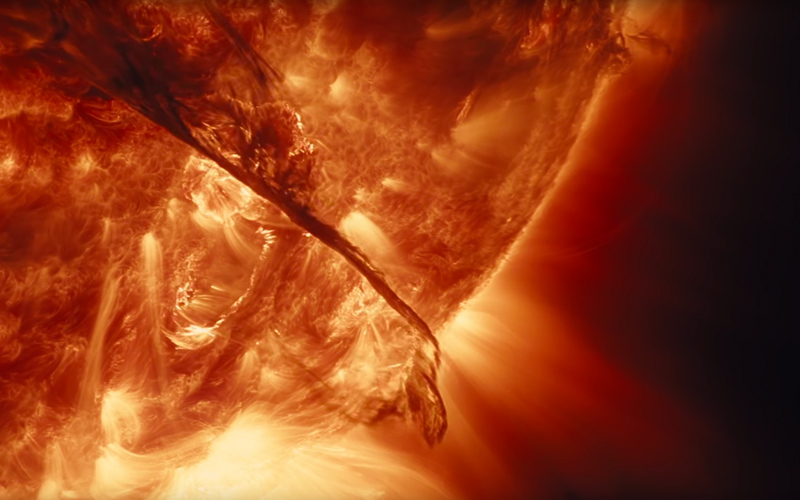 A still from the film. Screen capture courtesy YouTube

For decades now, acclaimed (and sometimes inscrutable) director Terrence Malick has been gestating a passion project about the dawn of time, and it’s finally here—sort of. The Voyage of Time: The IMAX Experience opened last Friday, but it’s only playing at one IMAX theater in L.A. (and not even one with laser projection). The only way to see Malick’s latest masterwork is by visiting the California Science Center—that’s right, the museum where troupes of middle schoolers go to see the Endeavor and watch 3D documentaries about oceans. It’s actually an appropriate venue; this cut of Voyage of Time is formatted as a 45-minute nature documentary unlike any other.

The film chronicles the history of time as we know it, from the dawn of the universe, through the blooming and development of life, to the earth’s eventual demise as the sun swells to a roiling red giant. With narration by Brad Pitt, the film weaves documentary footage, CGI, practical effects, and photos from the Hubble Space Telescope into a visually immaculate whole. Some images are unforgettable. The earth, newly formed, hovers under the sun, dropping a conical shadow into empty space. A cuttlefish (indisputably the world’s best animal) glides over the seabed, rippling with changing colors. A lava flow oozes and cools, glowing red from within. Gorgeous image after gorgeous image fills a screen that nearly consumes your periphery—it’s glorious. Then, all too suddenly, the lights flip on and a disinterested attendant is asking you to please proceed to the nearest exist.

Which is, without fail, how the transcendent moments of life work; if we experience them at all, they’re brief, and they pass just as quickly as they come. Of course, if Voyage of Time seems too short—critic Simon Abrams described as “like a sampler platter version of a hearty meal”—there’s more to come. A second version, Voyage of Time: Life’s Journey, is twice as long and will get a limited theatrical release next year—but that one won’t include a ticket to a kid-friendly exhibit on the space program with the price of admission, so what are you waiting for?

Voyage of Time: The IMAX Experience at the California Science Center runs until November 18th.

Thomas Harlander is a staff writer at Los Angeles magazine. Follow him on Twitter and Instagram. He recently wrote Which Zoo Is Better, the Abandoned Zoo or the Actual Zoo?