Home Art Tehrangeles Is a Hub for L.A.’s Iranian Community (and a Great Place... 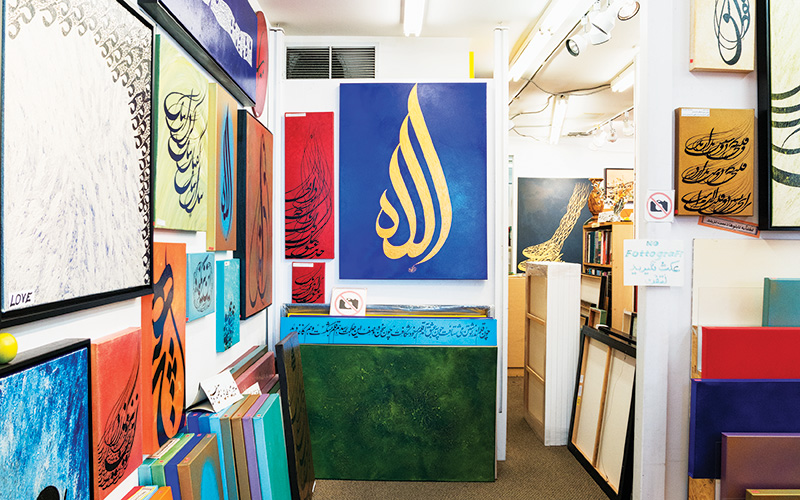 Unless you’re fluent in Farsi, it’s best to know exactly where you’re going before heading into Tehrangeles (lest you intend to go to one bookstore but end up in another because both have the word ketab—Farsi for “book”—in their names). The pocket of Westwood is a stomping ground for many of the region’s 700,000-plus Iranians, a place where they can ﬁnd imported goods, literature banned in their native country, and traditional culinary delicacies. Not Iranian? Not a problem. Tehrangeles is easily navigable with a little help.

Owner Masud Valipour specializes in the fine art of Persian calligraphy. Most of his pieces represent family names, but request something custom for your mantel (or a tattoo) and he’ll create it. » 1441 Westwood Blvd

RELATED: Round Peg in a Persion Square

Attari Sandwich Shop is known for its famed beef tongue sandwich, but leave room for something sweet. » 1388 Westwood Blvd

The jewel of Tehrangeles is Saffron & Rose, a Persian ice cream shop that offers such ﬂavors as Medjool date, jasmine, and (of course) saffron-rose. The store adds ground orchid root, or salep, during the churning to give the stuff a thick, chewy consistency. Don’t bypass the cucumber option, ﬂecked with chunks of the sugar-cured vegetable. » 1387 Westwood Blvd

Some of L.A.’s Best Kebabs Are Being Grilled Up in a Santa Monica Parking Lot