Home Uncategorized Tedeschi and Trucks Have the Best of Both Worlds 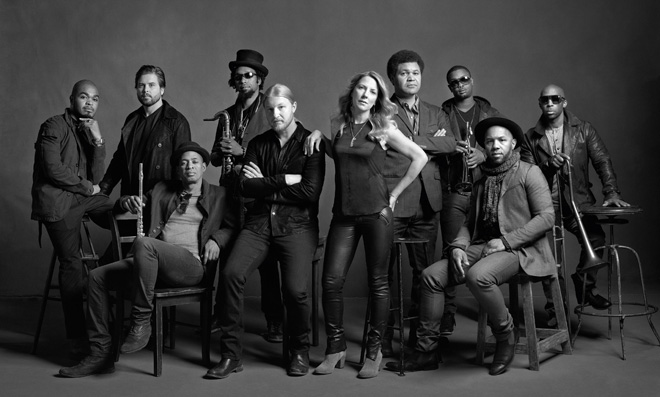 What happens when a former child prodigy guitarist falls for a powerful female blues singer? If you’re Derek Trucks and Susan Tedeschi, you have a couple of kids, combine your two separate bands to form a new group (Tedeschi Trucks Band), release an album, and win a Grammy (2011’s Revelator). Not too shabby.

Trucks, the nephew of original Allman Brothers Band member Butch Trucks, played his first paid gig as a guitar player at age 11. By the time he was 20, he joined the Allman Brothers Band, and Rolling Stone magazine calls him one of their 100 greatest guitarists. Tedeschi has been singing since before she could talk and had a successful solo career, earning five Grammy nominations. In 1999, her band opened for the Allman Brothers in New Orleans. The rest, as they say, is history.

The couple married in 2001 and now have two children, ages nine and eleven. Three years ago, they melded their two separate bands into a single unit. In the midst of touring the world, they try not to be gone more than three weeks at a time and bring their kids along whenever they can. They built their own recording facility at their home in Jacksonville, Florida, and in August they released their second studio album, Made Up Mind, a compelling mix of blues, rock, funk, and soul. The musicianship of the players in the current band has elevated the music into a new realm for Tedeschi. “It’s the best band I’ve ever been in by far,” she says. “The talent level is off the chart and we were more prepared than when we made Revelator. I really love the songs we wrote for Made Up Mind. I’ve never listened to any of the songs that I’ve ever recorded, and I listen to this record all the time. I actually work out to it! I was really pleasantly surprised.”

Their 10-piece powerhouse returns to Los Angeles on Friday, December 6, when they play the Orpheum Theatre. Trucks will be on lead guitar, Tedeschi on vocals and rhythm guitar, and they’ll have a keyboardist/flute player, three horn players, two backup singers, and, just like the Allmans, two drummers. “We are looking forward to playing the Orpheum,” Tedeschi says. “I hear downtown L.A. is a lot of fun now.”

The tour is booked solid through most of next year, and Susan says they are on track to start recording a new album next fall. When asked about being the only woman in a 10-piece band, she adds that she’s the only woman on the entire tour, crew and all.

“I don’t take it for granted, but I miss the girls. Sometimes I get emotional and the boys have to put up with me. But I do enjoy trying to represent the women that are out there. We have a lot of female fans and a lot of little girls that are playing guitar, and I’m out there doing it to keep those kids motivated. I also feel like I’m finally getting into the swing of recording albums. I’ve never been that comfortable in the studio. I tend to like the crowd, the live performance, feeding off the people as well as the band. Now that we’ve built our own studio and can make records at home and be around the family, it’s really nice. They are two separate buildings. When I get to one building I’m in one mode, and in the other building I’m in mom mode.” Sounds like she has the best of both worlds.