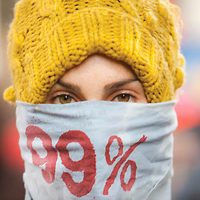 Just Occupy, an exhibition of work by photojournalists Ted Soqui and Christopher Felver plus pieces by artists Shepard Fairey and John Harvey, opened at the Robert Berman Gallery at Bergamot Station last week. The show—the first to document the Occupy LA movement—is spirited, colorful, and moving.

It includes portraits of protestors, like the one Soqui took of Sarah Mason in front of City Hall that was selected by Fairey as the cover image of Time magazine’s Person of the Year cover in December. The original image, which hangs mid-way down the gallery’s right-hand wall, is striking. Mason’s skin is lighter than it appears in Fairey’s interpretation, but her eyes, hazel magnets beneath a mustard-colored cap, exude confidence.

Other photographs capture the Occupy L.A. movement as it grew, evolved, and was ultimately uprooted from downtown. My favorite picture in the exhibition, a large panorama in the middle of the room, shows how diverse the group of protesters that gathered outside City Hall was, both in age and race, and how technology and Hope were tenants of the cause; cell phones, cameras, and posters with positive messaging dot the frame. Some photographs portray the culture of the protests (I could practically hear the drums), most include an image of the U.S. flag. Some pieces are framed, and others are tacked to the walls simply, as if in solidarity with the 99% who can’t afford, well, much.

In the back of the gallery a United States of America-shaped body bag lies on a mini metal gurney. A tag tied to its zipper reads CAUSE OF DEATH: GREED/HUBRIS. It’s the darkest, most overtly political piece in the show, and yet it fits in. It’s smart, packs a punch, and seeks to put a literal end to the economic injustice faced by Americans. What happens next? We’ll see.