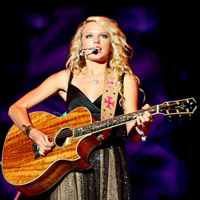 I took my 14-year-old sister and her friend—both serious Taylor Swift enthusiasts—to the singer’s Staples Center concert this past weekend. No, they didn’t make their own Taylor tees, but they knew the words to every song. It was my sister’s friend’s first concert, and she was giddy as we climbed the many, many stairs to our seats. Here’s their expert recap of the show, which I’ve annotated for accuracy:

Nothing tops the screams (read: extremely high-pitched shrieks) of 20,000 fans in a sold-out Taylor Swift concert. The 19-year-old (nope, 20) curly blond-haired star opened her show with a bang (in fact she popped out of the two-level stage wearing a tear-away marching band outfit over a sparkly silver sequined dress). Starting with her award winning song, “You Belong with Me” (Smart choice for an opener. A radio hit for those unfamiliar with her canon). Swift really gets the crowd going (read: screaming, dancing, shrieking, and jumping).

We loved her show so much (note: both nights at the Staples Center sold out). Taylor always has such a high energy level (it’s true, someone should look into this) and knows how to rock (read: headbang; she did the move about a million times). The amount of hair flips she does performing her songs really made us wonder how those long curls stay so perfect (someone should look into this, too). She also did a series of costume changes (there were guitar changes as well: one was acoustic, one was electric, and one matched her silver dress). They were all very bright and sparkly like her songs (not all of her songs are sparkly. “Fifteen,” for example, is mellow, and she sang the song from a stool). While performing her song “Forever and Always” she expressed her feelings by throwing a chair from the upper stage to the lower stage (yep, Taylor translated her lyrics into action onstage; during “Should’ve Said No,” she pounded aggressively on trash can drums).

Her songs are inspirational, and she is a role model to many young girls growing up (the concert was filled with kindergarteners and preteens). Listening to Taylor makes a bad day better. Going to her concert just made us love her more (read: purchase souvenir tees and bracelets) and gave us a chance to experience her music in a whole new way.