Home Architecture These Teal Art Deco Towers Are Among the Most Beautiful Buildings in... 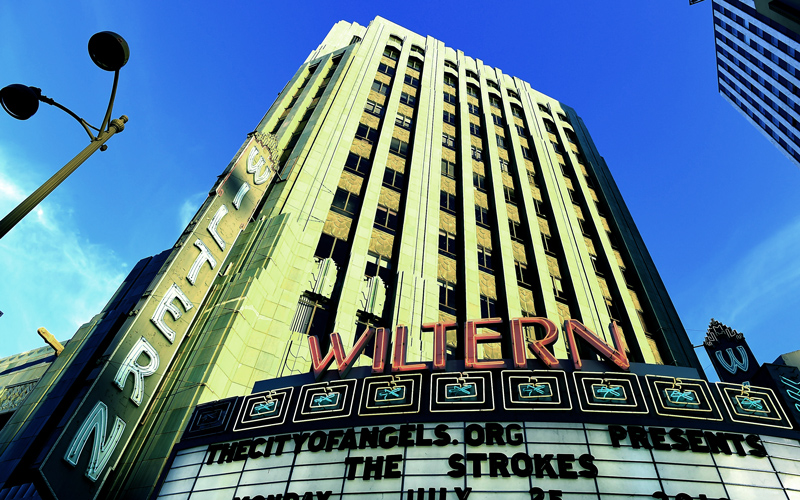 You don’t have to know much about architecture to know that Art Deco is the best. It’s immediately recognizable, it’s both classic and fresh, and it’s one of two architectural styles anyone actually knows the name of (the other being Mid-Century Modern). If you do know stuff about architecture, you know that Art Deco’s whole schtick was being decorative and indulgent (and also sort of Egypty because people were super into Egypt in the ’20s and ’30s) but not pedantic and backward-looking like the styles that preceded it. In L.A. Art Deco is often lightheartedly sumptuous—especially when an architect went all out and did an entire building exterior in pastel teal. There’s something about the color—it’s muted but striking, evocative of swimming pools, perhaps—that feels both surprising and site-specific. The buildings below are already stylistically significant just for their fluting and zigzags and and chevrons and whatever, but it’s their blue-green terra cotta tiling that elevates them among the most distinctive landmarks in the city.

Built in 1930 by Deco master Claud Beelman, the 13-story building was originally a department store and office space (though it’s since been converted into luxury lofts). At the time it was built, the clock tower was allowed to surpass the city’s 150-foot building height limit, making the Eastern Columbia one of the (then) tallest buildings in DTLA at 264 feet. The teal exterior and blue and gold accents—like the radiant sunburst design over the entrance—make it one of downtown’s most distinctive buildings. Even the sidewalks around it are stylized—the red, black, and gold terrazzo is patterned with zigzags and chevrons. The Eastern is, arguably, the greatest Art Deco landmark in Los Angeles.

Like the Eastern, the Los Angeles Jewelry Center was also designed by Claud Beelman and was also completed in 1930 and is also 13 stories tall. The building taps into the same Deco aesthetic with teal tiling, bronze ornamentation, and striking vertical lines. Originally the Sun Realty Building, it now marks the center of downtown’s jewelry district.

Anyone who moves to Koreatown eventually has this epiphany when they realize that “Wiltern” is just a portmanteau of “Wilshire” and “Western,” the streets that intersect in front of the iconic theater. The tower itself is officially the Pellissier Building, and it was built in 1931 by architect Stiles O. Clements (who also designed Hollywood Boulevard’s El Capitan Theater). Originally the Warner Brothers’ Western Theater, the Wiltern fell into disrepair in the ’60s but was later salvaged by preservationists. Before restoration, the elaborate ceiling—a futurist’s vision of Wilshire boulevard bristling with skyscrapers—had begun to crumble and fall into the seats. The theater is now operated by Live Nation as a concert venue.

Adorned with plaster panels molded with typical Art Deco motifs, the Georgian Hotel was built in 1931 by architect M. Eugene Durfee, who did most of his work in Orange County. The teal and gold building also incorporates some Period Revival elements, like the balustraded balconies. Opened during prohibition, it originally housed a speakeasy where studio execs and A-listers came to drink and escape the public eye.