Home Art Red Ink: How Tattoo Artists Are Getting By During the Pandemic 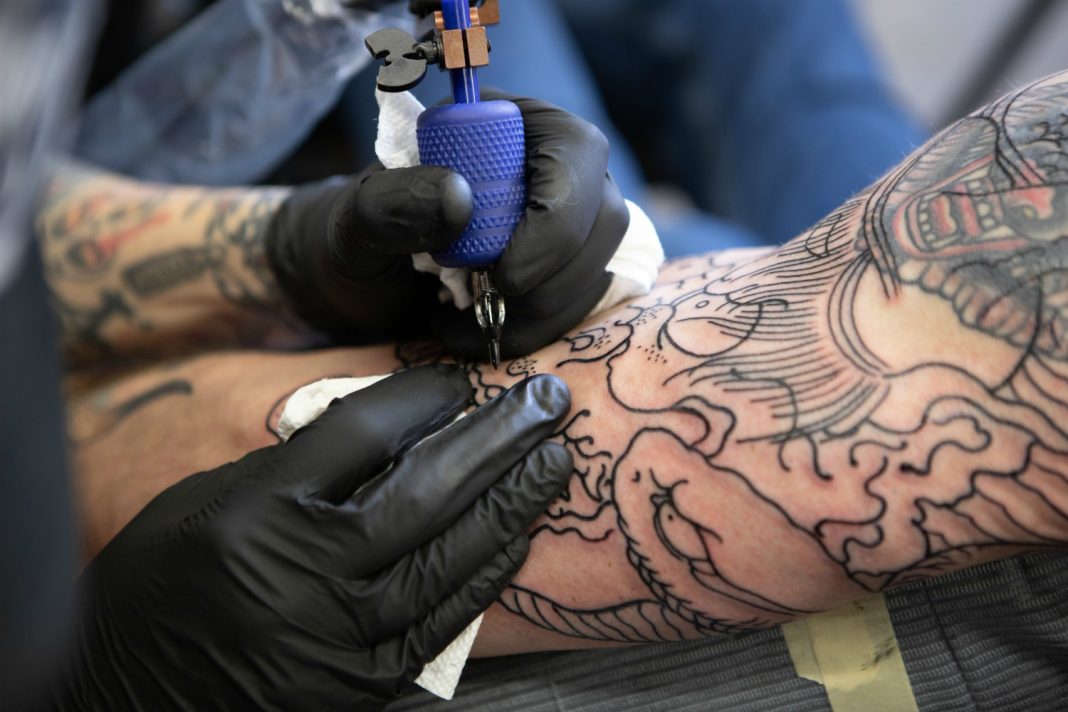 Tattoo artist Jose Arvizu has spent the last handful of years honing his craft and building his client list at legendary Long Beach parlor Outer Limits Tattoo. When he isn’t working on hometown clients, the artist better known as Spacehustle tattoos around the world, and was planning a trip across both Europe and Asia this year. Then the COVID-19 pandemic struck, shutting down Southern California’s tattoo parlors—not to mention international travel—for the bulk of the past six months.

“It’s obviously taken away my income and the momentum I’ve built up over the years,” Arvizu says. “Now everything is on pause except for my bills.”

Outside of red states that rushed to reopen their economies even as virus cases soared, the tattoo industry has struggled to find its footing since the start of the pandemic. Throughout California—including in Los Angeles County—hair salons are now able to offer indoor service, but tattoo parlors remain among the high-touch businesses that still aren’t permitted to operate, despite briefly being able to reopen in June. And while unemployment insurance and other safety nets have helped workers in other shuttered industries stave off financial disaster, many tattoo artists do a cash-heavy business and aren’t able to provide precise proof of income. That’s meant surviving the past several months with little more than their existing savings and their ingenuity.

Some tattoo shops have quietly remained open since they were ordered to shutter in March. Others opened more recently despite the mandate that they remain closed. For artists in dire straits, the risk of getting caught and being punished has been outweighed by the necessity to feed their families or pay rent. Plus, some say, the sanitation and sterilization practices already in place in most reputable tattoo shops—coupled with rigorous mask usage by both clients and tattooers—have made them more comfortable taking their chances being close to clients.

It hasn’t been business as usual, of course. Some shops have closed to the public while remaining open on an appointment-only basis. For an artist like the up-and-coming Kadriya Truvillion of Purple Panther Tattoos in downtown L.A.—who was also furloughed from her second job as a bartender because of the pandemic—switching to private sessions was the only reasonable answer.

“Most of my consulting happens online via email or [Instagram] DM correspondence now,” Truvillion says of how she operates these days. “The other big change is that clients often want to bring friends and family members to their appointment for emotional support, but we’ve been discouraging this habit now despite being fine with it under normal circumstances—so it’s probably a slight bummer when I encourage them to come solo to their appointment.”

The threat of punishment for noncompliance hasn’t been an effective deterrent for lots of artists, largely because it’s been difficult to determine what the punishment is.

“We were never actually told by anyone official,” one artist, who asked to remain anonymous, says. “I don’t even know who to ask. I don’t know if it’s the health department or each separate county’s business division. It’s actually really weird that we never got any official orders from anyone; we’re just supposed to know because of the news.”

Multiple calls and emails to the L.A. County Department of Public Health, the agency that ensures artists have their blood-borne pathogen certification in order to be licensed, didn’t yield specific answers, but at least one artist reported that their shop was visited by the member of a “task force” they believed was associated with the health department.

“Maybe instead of trying to fine businesses for being open, they should put that money into funding businesses that need to be closed so they can afford their basic living expenses—so they don’t have to work ‘illegally,’” the anonymous artist says. “Sometimes it’s better to ask forgiveness than permission, I guess.”

Artists who have put down their guns during the pandemic have launched everything from limited edition T-shirts to podcasts to make up some of their lost income. Others have taken to tattooing out of their homes (or their clients’ homes) and taking trips to states like Arizona and Colorado, where they’re able to tattoo in their friends’ shops. Even posting to Instagram—undoubtedly the best marketing tool for tattooers—has become a bit of a tightrope walk. While they want to communicate to clients that they’re accepting appointments, they don’t want to draw unwanted attention.

For Arvizu, the answer has been leaving California to work—even if it means risking his health.

“I’ve had to go out of state a few times to work in states where shops were allowed to open, which is terrifying because we’re in the middle of a pandemic,” Arvizu says. “But, I have to pay rent somehow.”