Home Pop Culture What Are People Looking for When They Look to Tarot Cards? 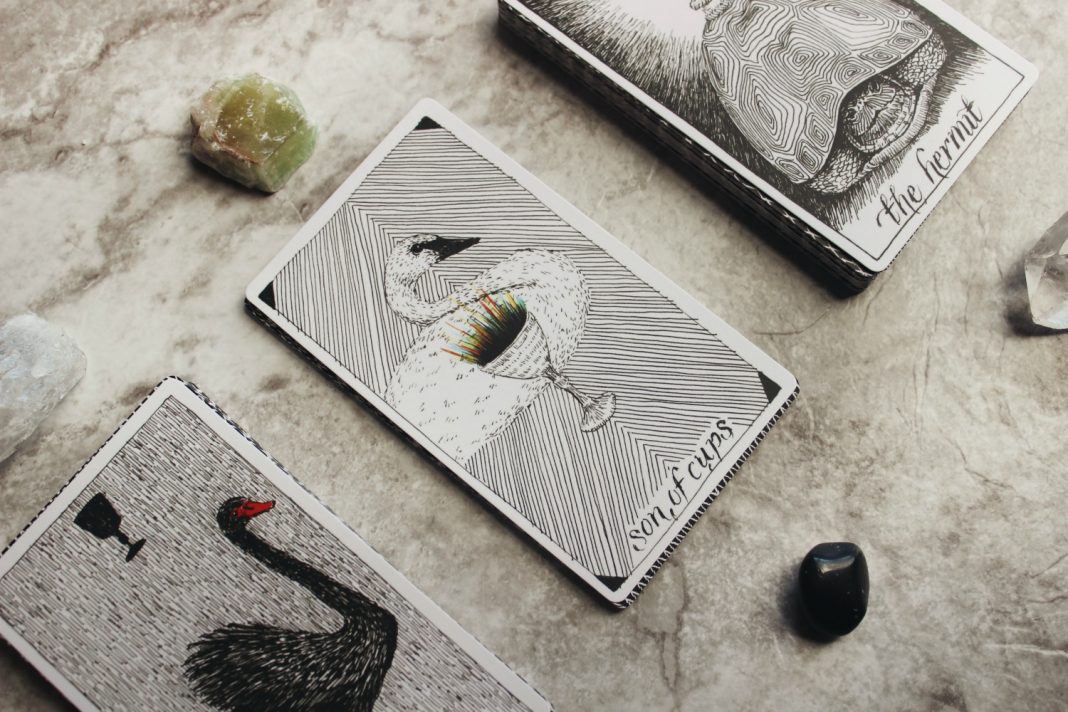 I grew up with a father who believed firmly in the power of crystals, pyramids, and copper bracelets. I was never sold, and I’ve always looked on tarot with the same jaded eye. But while the first three have been consigned to the scrap heap of ’70s nostalgia, tarot use is thriving.

So despite my skepticism, I’ve invited a professional life coach/psychic who goes by the mononym Sterling to my house to read my cards and hopefully help me understand why people are still looking to decks of cards for guidance.

The candles I’ve lit flicker mystically as Sterling explains that she is going to pull a single oracle card for my reading. While a typical tarot deck has 78 cards, more or less, and is best for complex questions, oracle decks are more straightforward. They’re what Sterling herself uses when she wants general guidance such as, “How can I make my life better right now?”

Sterling tells me to cut the deck and I reach forward with my right hand. “No, “she says. Use your left. It makes a difference.”

I dutifully lift the stack with my left hand and and wait, surprisingly nervous, for Sterling to reveal my card.

“I can’t see anything when it’s this dark,” she announces, breaking the spell.

Not quite, but the Man Holding a Coin (as the card is known) does have long blond hair and a ruffled white shirt with a deep V-neck that reveals some seriously toned pecs. He’s standing in a sun-drenched meadow holding an ancient Asian coin and, well, let’s just say, he wants me.

As I stifle my laughter, Sterling tells me that while the card might indicate a future romantic interest, it more likely represents someone who will have financial advice for me. She says I should remain open to what he has to say.

This vague advice does little to quash my skepticism. But then I recognize that much of what Sterling is offering is the opportunity to talk about my concerns to someone who is fully present and engaged with me. And who couldn’t use a little help with what Sterling calls “manifesting”—that is, creating the life we want for ourselves?

A lot of people are seeking that help it turns out. Searching the term “tarot” on Kickstarter reveals some 800 active projects. On Etsy it turns up 60,000. Meanwhile, Instagram has over 6 million posts tagged with the keyword “tarot.”

Clearly this calls for a less jaded perspective than my own. So the day after I meet the Man Holding a Coin I ask my secret Facebook group of women Jeopardy! contestants (yes, we have one) if any of them use tarot. And a surprising number do.

One of them is Julia Cain, a student affairs advisor who works and lives on-site in a college dorm. She tells me that in the ten years since she started reading tarot, her students’ concerns—jobs, grades, love—haven’t changed much but that in recent years they’ve intensified.

“Everything is pretty big and scary right now,” she says, acknowledging that social media is part of it. “Kids have a lot of FOMO. They want someone—not a parent— to help them figure out what to do. Tarot gives them a way to externalize the process.”

But it’s not just younger people seeking that kind of feedback.

Take Kiersten Brown, a mother and aspiring novelist from upstate New York. Kiersten has recently left her job to focus on writing a novel. Like a lot of ambitious women, she worries about balancing personal goals and family. She’s invited me to listen in as her friend, Margaret Dimock-Dumar, reads her cards for her.

After less than half a minute on our call, I understand Kiersten’s concerns. Her children, ages six and ten, shriek and giggle in the background as her husband, John, tries unsuccessfully to shush them. It’s a far cry from the candle-backed solitude of my reading with Sterling.

Taken as a whole, the cards provide positive feedback for Kiersten’s “process”—mornings for her book, afternoons for her children.

The chaos doesn’t seem to faze Margaret, who pulls out three cards when Kiersten says “now”: the seven and King of coins and, to John’s great delight, Death. John, it seems, has a fascination with the grim reaper and he particularly likes the way he’s been rendered in Margaret’s “True Black” tarot deck.

Kiersten and Margaret, too, seem pleased. In tarot, the reaper indicates not literal death but change and opportunity. Taken as a whole, the cards provide positive feedback for Kiersten’s “process”—mornings for her book, afternoons for her children.

I should note here that none of the women I spoke to think tarot in any way predicts the future. Even Sterling—the sole person I spoke to who claims to possess psychic abilities—says the cards are more like a weather report, presenting the current conditions and possibilities for where things might go. The future, she assures me, isn’t written in stone. We have a say in creating our own lives. Tarot is about helping people visualize the possible consequences of their choices.

Margaret puts it more romantically: “Tarot’s a way to tune in to something your heart already knows but your head can’t hear.”

Days after my reading, I’m still not sure what my heart and the Man Holding a Coin were trying to tell me.

But as I’m about to send tarot back to the scrap heap, an email arrives from an old friend. He has recently completed a novel and wants my feedback. Why not ask for a trade? I think. I’ll read his novel if he’ll read mine, which I haven’t thought about in years.

It’s far too early to say if my friend is the Man Holding a Coin or know whether his advice will bring me riches. But I do know that for the first time in a long time, I’m excited about working on my book again. And that’s wealth in and of itself.

RELATED: So You’ve Been ‘Zodiac Shamed.’ You’re Not Alone