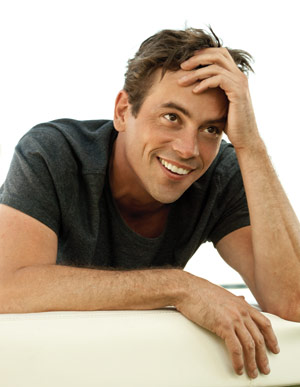 “The best furniture makers know how to fix their mistakes without starting over,” Skeet Ulrich says as a table saw hums nearby. Dressed in jeans, a gray T-shirt, and running shoes, the 40-year-old star of the new Law & Order: Los Angeles is standing in the cavernous House of Hardwood, a custom milling shop in West L.A. Over the years Ulrich has bought a lot of wood here; this is where he comes when he’s looking for walnut to complete the headboard on his handcrafted bed or poplar for the sideboard he designed to display art books.

Each piece of heirloom furniture Ulrich makes becomes an obsession.“It’s almost like acting in that once you start getting connected to it, you cannot stop thinking about it,” he says, nudging the brim of his X Games trucker hat to reveal eyes that are the color of semisweet chocolate. “That’s how I typically know that I have to do a role—if I cannot stop thinking about it, I have to find a way to be part of it.”

Law & Order: Los Angeles, which airs on NBC, is Ulrich’s first TV series since the one that taught him how devoted small-screen fans can be: Jericho. In that show, which debuted on CBS in 2006, he played a bad boy who returns to his Kansas hometown and becomes a hero just before civilization as we know it begins to break down. The program was so beloved that when CBS canceled it after a single season, viewers deluged the network with peanuts—a nod to a line of dialogue (“Nuts!”) uttered by Ulrich’s character.

Jericho was the first series in 26 years to be brought back from the dead, but its days were numbered. The plug was pulled for good in 2008 because of wan ratings, which Ulrich blames on a two-and-a-half-month hiatus between the 11th and 12th episodes. “Whatever moron came up with that in marketing, I hope they lost their job, because they really killed us,” he says. “It was a shame. There was a lot of story left to tell.”

That’s why he’s so pleased to be throwing himself into the role of Detective Rex Winters. “TV is the only place you get to do long-arc storytelling,” he says, ticking off the names of his costars, Alfred Molina and Corey Stoll, who are helping him bring those stories to life. “I’m very grateful.”

The day before visiting House of Hardwood, Ulrich was training to wield a firearm like a real D3 (the highest detective classification). “We did static shooting and then timed exercises—running up to a mark, firing two to the body, one to the head, then going back to another target,” he says happily. By accompanying LAPD detectives on their shifts, he’s learned that they are investigators, not first responders. Only rarely do they chase perps, guns blazing. But this being TV, his character will likely open fire more often. Which is just fine by Ulrich.

“I’ve never played a cop. It’s like doing Ang Lee’s movie and playing a cowboy,” he says, referring to the 1999 Civil War drama Ride with the Devil. “It’s like being a kid again.”

Ulrich was born Bryan Ray Trout in Lynchburg, Virginia. His parents split up early on, and when he was six, he says his father, a hotel chef, kidnapped him and his older brother, Geof. They spent the next three years moving from Florida to New York to Pennsylvania. Eventually the brothers were reunited with their mother in North Carolina, whereupon his father disappeared.

“I didn’t really have a dad,” says Ulrich. He got a new last name when his mother married a former race car driver, D.K. Ulrich. A soccer coach bestowed the nickname “Skeeter” because the boy’s slight stature reminded him of a mosquito’s. A sickly child who had near-constant bouts of pneumonia, Ulrich was ten when doctors found he had a cleft mitral valve and a hole in his ventricular wall. Open-heart surgery left him with a big scar and a defensive posture that he likens to post-traumatic stress disorder.

That was also the year he discovered the joy of building things. A tree fort he and a friend worked on was so elaborate, it had an elevator. “We found a battery-operated winch and rigged it up in the tree,” he says. “It survived hurricanes. It was stout.”

Carpentry led Ulrich indirectly to acting. He was studying marine biology at the University of North Carolina when he began building sets for the theater department. A flyer advertising a summer workshop run by the playwright David Mamet caught his eye, and he applied. There was no audition, just a questionnaire with head scratchers like “What do pineapple and Omaha have in common?” (Answer: They’re both card games). Ulrich got in, transferred to NYU, and soon he was mining the emotions he’d been wrestling with all his life in roles with Mamet’s Atlantic Theater Company.

“I had a lot boiling inside of me,” he says. “As Mamet said, ‘If you didn’t want to be an actor, you should have had a good childhood.’”

Ulrich came to Los Angeles in 1995 and soon was getting noticed in a string of films. He played a crazed teen killer in Wes Craven’s franchise-launching Scream (1996) and a gay hustler in James Brooks’s 1997 drama As Good as It Gets.

That same year, when he was 27, Ulrich married the actress Georgina Cates, and they moved to Virginia, settling into a house he designed on 500 acres. Between roles he built furniture in a huge workshop on the property. The couple returned to L.A. in 2002 after having twins, a boy and a girl. They have since divorced but share custody.

As he continued to work in film, Ulrich did a stint on Miracles, a short-lived ABC series that dealt with the supernatural. All the while he was making things out of wood, learning to address his mistakes without starting over. “I have a table saw. I have a joiner,” he says, grabbing a piece of Honduran mahogany from a stack and holding it level. “You flatten this face first. That’s your reference point. Then you lay it down on the planer and create another face that is exactly parallel. Then you have a true piece of wood.”

Recently he was reminded of the price—and the rewards—of error. Just as he was about to attach the sideboard’s legs, he accidentally severed the mortises and tenons that formed the crux of one joint.

“Years ago I would have scrapped it,” he says. But over time, with practice, you learn: “You can find fixes.” In so doing, your needs are met. “Film acting is a director’s medium. TV is a director’s and producer’s medium. And I love both,” says Ulrich. “But with woodworking, I’m in control. That’s something I don’t get in acting.”