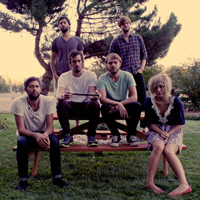 There’s currently no band out there with a more fitting name than The Head and the Heart. Back in 2009, the members of the six-piece folk-rock outfit met serendipitously at the open mic nights held at Seattle’s Conor Byrne pub. Before they happened upon each other, many of them were pursuing what they thought they were supposed to do instead of what they longed to do.

Orange County native Josiah Johnson had moved to Seattle for grad school (in computers, no less) when he wandered into the bar. He was drawn to the raw musicianship of Jonathan Russell, a recent transplant from Richmond, Virginia.

Johnson wasn’t there to recruit—his pragmatic side told him he needed to focus on school not music—but the two became friends and songwriting followed. “I’d always been raised on the mindset that you’ve got to do what makes sense,” Johnson says. “And that’s perfectly logical. But there’s that contrast between making a decision based on what makes the most sense versus what’s ultimately satisfying.”

The tug-of-war between the rational and the romantic was also weighing on keyboardist Kenny Hensley’s mind when he packed his bags for Seattle to pursue writing scores.

“It was either stay in L.A., give up on music, and go to school or do something else I didn’t want to do,” Hensley says. “Or I could use the move to Seattle as an excuse to try a little bit longer. Jonathan had also moved from Virginia to Seattle to play music. Even in our different stories, it’s been that decision to do what you want to do rather than what you’re told to do.”

And so it goes for the rest of the band: Violinist Charity Rose Thielen had just returned from studying abroad at the Paris Institute of Political Studies, drummer Tyler Williams moved from Richmond to Seattle specifically to join the fledgling group after Russell sent him a demo, and bassist Chris Zasche tended bar at their unofficial band headquarters, the Conor Byrne.

They found kindred spirits in each other and began jamming for pleasure. After playing together for only a few months, they recorded an eponymous album, burned copies of it themselves, and distributed it to local shops. It flew off shelves and the buzz began to build. Even when record label bigwigs started to perk up their ears, there was no watershed moment when the band members realized they didn’t need their other pursuits. If it hadn’t worked out, Hensley says, each of them could have returned to their jobs or studies.

“In that way, we didn’t have a whole lot to lose. It got to the point where the band was working so well it became the thing that made sense. No one did it blindly. We kept doing it and things kept going well and doors started opening,” Johnson says.

In 2010, Seattle label Sub Pop, best known for popularizing grunge by signing local acts Nirvana and Soundgarden, came knocking. “In high school I’d go on the Sub Pop site and read the Q&As, like ‘How do you send in your demo?'” Hensley says. “I was obsessed with every band on the label. I thought they were the coolest. So moving to Seattle, starting a band, and being signed to that label is surreal.”

In addition to headlining tours, The Head and the Heart has opened for Vampire Weekend, Dave Matthews, The Decemberists, and Iron & Wine, among others. Their second album, Let’s Be Still, released in October of last year, brought them to larger stages, including Coachella’s Outdoor Theater earlier this month; it was their second year playing the desert bash.

“Growing up [in Southern California], this one means more than most festivals to me. I think about all the crazy, huge bands who are playing the same timeslot or who once played the timeslot,” Hensley says.

Johnson and Hensley attended their fair share of Coachella festivals (they admit they’ve been forever spoiled by their air-conditioned trailer), but to be asked back on a larger stage is harder to comprehend.

“Success comes to you when you aren’t waiting around for it,” Johnson says. “It’s just working hard and doing what you can on your own.”

The Head and the Heart will play the Hollywood Bowl with Iron & Wine and Glen Hansard on Aug. 10.