Home Uncategorized Taking the Plunge: Hole-in-The-Wall Spots are Going for The High Dive 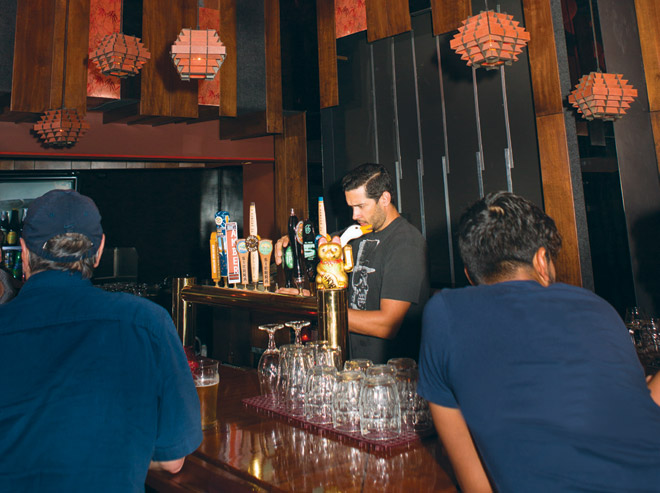 The dingy beaded curtain in the doorway of the Melody Lounge is gone. So is the outdated karaoke machine. Under new owners Pete Lenavitt, Gabriel Paustian, and David Neupert, partners in the downtown danceteria La Cita and the Echo Park watering hole the Short Stop, the small, windowless dive bar in Chinatown has a new look. Vertical mirrors, green vinyl benches, and a canopy of red paper lanterns make the joint feel more modern without trying too hard. Only beer is served, but the 24 taps feature local brews such as Golden Road and Noble Ale Works alongside more exotic suds like Chimay Tripel and Chicago favorite Goose Island, all at $5 a glass. The face-lift is part of a trend, equally celebrated and lamented, of L.A.’s seediest spots becoming more respectable—leaving some denizens pining for a species of bar that’s rapidly becoming extinct.

Little Joy
The graffiti, along with the smell of clogged toilets, is gone at this Echo Park hangout. Gluten-free beer is poured, and the brighter and cheerier setting feels shockingly grown-up.

King Eddy Saloon
The smoking “patio” has been transformed into a darts nook, and the cleaned-up interior is drawing as many customers from nearby downtown lofts as from skid row. Still, a portrait of patron saint Charles Bukow-ski hangs tough.