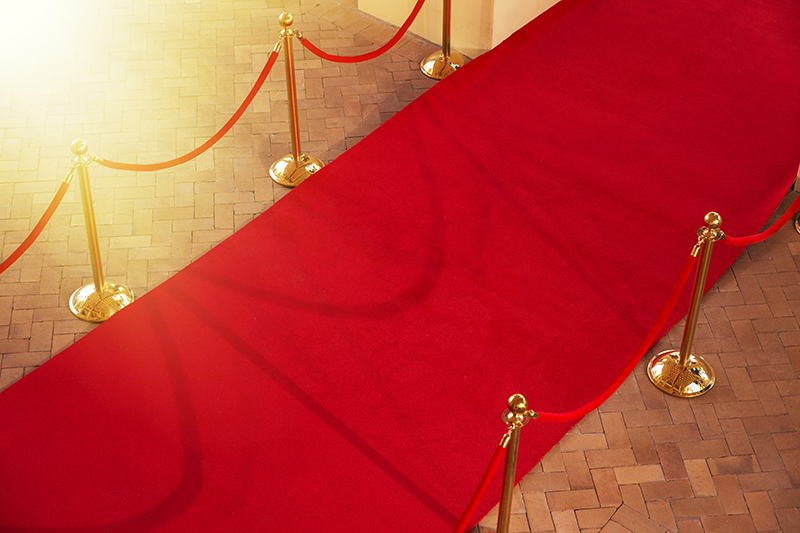 On Sunday, January 7, Hollywood’s glitterati will assemble for the 75th Golden Globe Awards. For 57 of those years, the show (along with several official after-parties) has been held in the grand International Ballroom of the Beverly Hilton hotel. Hosting an event on that scale is no easy task—it takes a team of about 6,000 people, in fact—so we went behind the scenes for a tour of the preparations to see what it takes to pull it all off. The Beverly Hilton hosts well over 100 “red carpet” events a year, but the Golden Globes red carpet is on a whole different level. Celebs will trod no less than 5,800 square feet of red carpet covering the entire front entrance to the hotel, but the carpet is just the beginning. There’s also live broadcast stations for approved entertainment media, bleachers for a small group of ticketed fans (more on them later), extensive lighting and equipment, and an elaborate series of arches, chandeliers, and clear tented coverings (just in case it ever rains).

Only 1,300 invited guests attend the Golden Globes, making it a much cozier group than an event like the Academy Awards, held in the 3,400-seat Dolby Theater. The room is tiered, with nominees and A-listers at round tables on the lowest level, and other guests spread around the two balconies. After a winner gets up to accept a trophy, the next step is to whisk them out a side door and directly into a winners’ room, where they can speak to reporters and pose for a photo op.

The Beverly Hilton’s executive chef, Alberico Nunziata, oversees a kitchen staff of over 125 to prepare the dinner for awards attendees (this year, he’s composed an entirely gluten-fee, vegetarian-friendly Italian menu), as well as the meals for each of the after-parties. Each party host (HBO, InStyle, Amazon Studios, Fox, and so on) picks their own catering concept, so in addition to the main meal, Nunziata and co. will be turning out Middle Eastern fare for one party, sushi for another, casual Italian snacks elsewhere, all simultaneously. To keep track of it all, each cart and tray of ingredients in his massive kitchen is color-coded for the party where it will eventually go. And what if a celebrity has a special awards night request, like in 2014, when Julia Louis-Dreyfus just wanted to eat a hot dog? The team is fully prepared for that, too.

In the ballroom, guests sip Moët & Chandon, the Globes’ official Champagne. No small amount of it either: 125 cases magnums of Moët & Chandon Grand Vintage 2006 and Moet Rosé Impérial, plus another 1,500 mini bottles of Impérial. If they step into the green room, they’ll be greeted by a familiar face behind the private bar there, Beverly Hilton bartender Oscar Zuleta, who has been serving celebs at the awards for decades. He’s learned the favorite drinks of many of the Hollywood elites (Robert De Niro, Amy Adams, and Jane Fonda have all been repeat customers), but he’s only indulged in an on-the-job drink with one, Sean Connery.

On Golden Globes weekend, every one of the Beverly Hilton’s rooms is dedicated to awards action. Many are set aside to accomodate talent attending the awards. Others are used for parties during and after the ceremony. A small group, though, are available to the public to book—but not just for a regular night. The only way to stay in the hotel on the night of the awards is to book a special package, starting around $3,000, which includes a Saturday and Sunday night stay, a seat on the red carpet viewing bleachers, and a special spot in the lobby bar to watch the ceremony live and then catch celebs as they walk by after the big show.