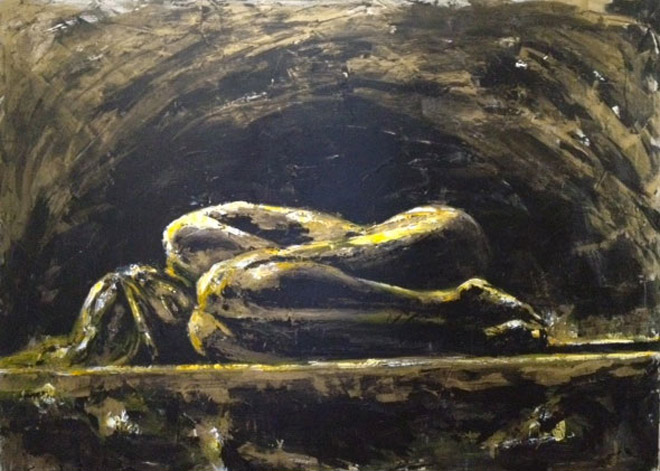 If a picture is worth a thousand words, Syrian painter Fadia Afashe has plenty to talk about. Born and raised in Damascus, 35-year-old Afashe was an established artist in her homeland who studied with renowned Syrian painter Adnan Abed Al-Rahman while simultaneously earning degrees in art and criminal law. A passionate women’s rights activist, she developed and wrote the script for the documentary Suspended, which focused on how Arab rape laws do little to protect women.

A long-time government employee, Afashe sought to escape the uprising and applied for a fellowship at the Humphrey School for Public Affairs. In June 2011, she left Syria to study at the University of Minnesota. Her husband, actor Jihad Abdo, later joined her, and together they set out to raise awareness about the atrocities being perpetrated by the Syrian government. Once again, Afashe’s dual passions, art and activism, went hand in hand.

Out of her social justice work, Afashe developed I Rise, the first U.S. exhibition of her work. Evoking victims of the violence through her impressionistic paintings, Afashe uses stark contrasts through acrylic paint to embody the struggles of activists against the Syrian regime. Her show includes 14 paintings and will be on display at the Levantine Cultural Center through Dec. 31. Tonight (also at the Levantine), Afashe will speak at a screening of the documentary, The Suffering Grasses, which focuses on the deaths of Syrian civilians.

What inspired you to develop “I Rise”?
After the revolution, my point of view changed. I needed to be political, and the only way to express my pain was by painting. The only thing giving me hope were the young people. They said, “We will win, no matter the price and if the world abandons us. Even if it takes years to rebuild our country, we will rise.” That’s why I titled [the exhibition] that.

How did you decide what to focus on in your paintings?
They were people I knew personally or knew them as activists or victims. One of my paintings [“His Soul”] is of a 20-year-old relative of my husband who was part of the demonstration in Damascus. The regime captured and tortured him, and he died in front of his parents. Another painting, “The Alphabet of Freedom,” was inspired by a popular phrase we use, “Just freedom.” Anyone who uses it shows they are against the regime, so I painted different phrases from the revolution.

As an activist safely living in the US, what is it like when you’re so far from home and still trying to support the revolution?
It’s hard to be active outside your country. I painted Syrian musician Malek Jandali who used his music as his tool to help the revolution. Because he’s a U.S. citizen, they couldn’t hurt him so they went to his family in Syria, elderly people, and they beat them savagely. Unfortunately, even if we are living in a free country we are not totally free. My husband and I are doing all this activism, but every single night we are facing this fear that maybe they will hurt our family. At the same time, we can’t give up.

You’ve given more than 30 speeches in the United States about the revolution. What do you talk about?
I tell them that the shelling doesn’t exempt any area- airplanes are shelling our neighborhood where there are children and we don’t have shelter.  It’s important for people to know someone from Syria so people feel more connected through that person. When I came here I realized so many Americans are disconnected from that part of the world, they don’t really talk about politics and some don’t even vote; it was quite shocking for me. People should enjoy and practice their democracy, you can’t do that if you’re not active. I explain that we are global citizens and I want people to ask their representatives to help because we are looking for democracy in Syria.

How do you feel about the media coverage in the U.S. of the revolution?
I’m so depressed with the coverage. The media is playing a very negative role in shaping the political thinking for America. Americans don’t have the right access to the news. It’s very narrow coverage and doesn’t explain anything. It’s very biased, and you can tell when you turn on the TV which political party’s [perspective] it is. Americans at least have unlimited access to the internet; there’s great coverage there. In Syria there is no access because it’s expensive and there’s censorship. I feel like the world is allowing this genocide to happen every day and doing nothing.