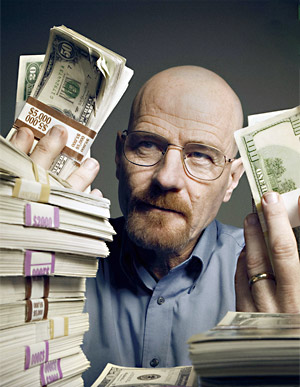 If Bryan Cranston were a Dodger—a notion not without appeal to him—he would be the consummate utility player, a grinder, a veteran of countless unsung assignments who finally gets his chance to deliver in the clutch and, just like that, captures the heart of the city. More, say, Mickey Hatcher than Andruw Jones.

Watch him in the cage, a smudged Easton bat wagging in his hands, a fitted blue LA cap snug around the creases of his forehead. His legs spread wide, butt down, elbow high, jaw pumping, he waits for the machine to spit out 60 mph fastballs. Thump. Miss. Clang. Foul. Ping. Linedrive. The plan was for me to meet the Emmy-winning star of AMC’s Breaking Bad—the darkest, most daring series on television—for some Sunday-morning hacks, but even though I have arrived at the BatCade in Burbank a few minutes early, Cranston is already in the box, tokens at the ready, working on his stroke.

“What?” he asks, surprised at being discovered.

“Warming up before me,” I answer.

“At our age—at my age…” shrugs Cranston, who, at 54, has been a fixture on TV for three decades, ever since he played an outlaw drag racer in a 1982 episode of CHiPs. He leaves the thought hanging, but when he tugs off a weathered Mizuno batting glove to offer his hand, he explains that meeting at this corrugated shed on Victory Boulevard is no stunt: The BatCade has long been a routine—part exercise, part therapy, part fountain of youth. “This is where I come to escape,” he says. “This is where I come to get away from myself.”

Cranston’s name might not be household material still, but his face—the granite chin, the dimpled cheeks, the road map of furrows and crinkles—has that archetypal I-know-you-from-somewhere quality. Rugged enough for drama and elastic enough for comedy, it is a King of Queens face and a Murder, She Wrote face, a Seinfeld face and a Chicago Hope face, a Matlock and a Baywatch and a Walker, Texas Ranger face. Eventually it became a Malcolm in the Middle face: For 151 episodes Cranston was Hal, the hapless, slightly unhinged sitcom dad, a role that rescued him from the character actor trenches and yet, for all the slapstick brio he brought to it, failed to win him the adulation that was showered on some of his costars.

To the delight of critics and cable habitués, Cranston’s face now belongs to Walter White, the narco-geek antihero of Breaking Bad, which in March began its third season on Sunday nights at 10. A quietly desperate high school chemistry teacher who has been diagnosed with terminal lung cancer, White vows to do something ballsy for once in his life, to leave more than medical bills to his pregnant wife and disabled son. With the help of a former student, he transforms himself into Albuquerque’s premier manufacturer of crystal meth. “All of a sudden he’s feeling things he hasn’t felt since he was a teenager,” says Cranston, who imbues the part with equal measures of repulsion and exhilaration. “He’s on this ride, and I don’t know that he wants to get off.”

The metamorphosis is not just existential. Paunchy at the outset of the series (we see him stripped to tighty-whities), with a timid mustache and a pouf of russet hair, Cranston dropped 16 pounds to mimic the ravages of chemotherapy. Then he shaved his head, revealing a pasty scalp knotted with veins. This season he is rocking a goatee as dense and sturdy as a beaver pelt. The effect has been at once haunting and humanizing—a character, a man, mutating before our eyes, a feat that helped earn Cranston the Emmy for Best Actor in a Drama for each of the first two seasons. “When I hear comments like ‘Wait, the guy in Breaking Bad is the same guy from Malcolm in the Middle?’ that’s about the best compliment I could ever receive,” he says, sipping black coffee from a Styrofoam cup at one of the BatCade’s picnic tables. “It’s the part of my life. The character of my career.”

As fantastical as it was that AMC was willing to gamble on a chemically enhanced morality play in the suburban desert, it was even more surprising that the channel put its money on Cranston: This was the actor, after all, who, as Hal, allowed himself to be variously slathered in blue paint, blanketed in yak hair, and swarmed by tens of thousands of randy bees. If Malcolm was all you knew him from, Cranston might appear more goofus than badass. Breaking Bad creator Vince Gilligan, though, had a different image of Cranston, an impression left by a 1998 episode of The X-Files. As co-executive producer on that show, Gilligan was struggling to find a guest star who could portray an anti-Semitic conspiracy nut dying from a demon force in his eardrum while holding Agent Mulder at gunpoint for nearly an hour—and still be someone worth rooting for. That would be Cranston. “Bryan just nailed it,” says Gilligan, who had Cranston in mind for Breaking Bad as he was writing the pilot. When AMC executives balked at his choice, Gilligan dusted off the old X-Files disc. “They flipped,” Gilligan says. “He’s just so fundamentally sympathetic.”

Dressed in faded jeans and a navy blue hoodie, his hair inching back to normal, Cranston at the BatCade looks more like the Little League dad that he is, having coached his teenage daughter, Taylor, from the time she was in T-ball. Born in the San Fernando Valley—and raised on the soothing patter of Vin Scully—Cranston played ball himself as a kid but at Canoga Park High was too distracted by adolescence to get beyond the JV team. Not until his 40th birthday, when his mother-in-law sent him to a Dodger fantasy camp in Vero Beach, did he feel the itch again to compete.

“I’ve always loved the game more than I was good at it,” says Cranston, who joined an adult hardball league upon his return, only to shred his shoulder while throwing from shortstop and endure rotator cuff surgery. He is hoping for a comeback, but with a Hollywood schedule—he was just in London shooting scenes for the Civil War-era sci-fi feature John Carter of Mars—it has been tough finding time to work out the kinks.

“Damn,” says Cranston, back at the plate, waving 33 inches of scandium alloy at air.

“Ah,” he says, drilling one up the middle.

“Talk about life lessons,” says Cranston, before buying another 25 pitches with a $3 token. “I remember very clearly my daughter crying because she was once called out at home plate—and she was safe, she really was—and she goes, ‘It’s not fair, it’s not fair,’ and I go, ‘You’re right, it’s not.’ But that’s just the way it goes. It’s not fair. You move on. You play your best. You do your best. And hope that, you know…”

He smiles, aware that baseball is one endless metaphor, and hands me the bat.