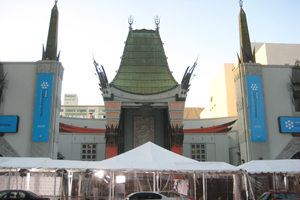 The glamorous luxury of the Hollywood Roosevelt Hotel was the perfect place to be for the opening night of the Turner Classic Movies festival.The Blossom Room has been rechristened “Club TCM” and is headquarters for the fest, which takes over venues up and down the Boulevard until Sunday with premieres, panels and special screenings. Thursday night was limo-to-limo at the Chinese for the restored A Star Is Born hosted by Robert Osborne. Back at the Roosevelt, Esther Williams and Betty Garrett lounged poolside with host Ben Mankiewicz and hundreds of fans as we all watched the Aqualillies do their synchronized swim routines in the (thankfully heated) pool wearing swimsuits designed by the MGM legend. Williams herself was sparkling in red sequins and promised swim lessons to all, and you “don’t need to bring a bathing suit.”