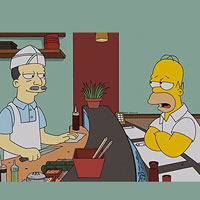 Share
Email
Facebook
Twitter
Pinterest
ReddIt
1. The Tubes – “Sushi Girl” (1981)
Best known for the 1983 hit “She’s a Beauty,” the San Francisco rock band tackled cross-continental romance in a goofy song that wondered, “Will my Suki find me in time / Or will her sushi spawn / The odor drives me out of my mind / The scent goes straight to my prawn.” John Donne this band ain’t. During their elaborate live shows, the Tubes often performed the song while shirtless in a beach party setup. A Hollywood punk, played by Nicolas Cage, crashes a Valley party where he and his best friend are grossed out by the sushi snacks. Although the hostess says, “Like, this is your tuna, that’s flying fish egg, and that’s sea urchin,” a shot of the sushi reveals that they’re mostly vegetarian rolls.

As Molly Ringwald demurely sets out a lunch of sushi, a horrified Judd Nelson asks, “You won’t accept a guy’s tongue in your mouth and you’re gonna eat that?” It’s positively normal compared with Ally Sheedy’s sandwich of Pixy Stix and breakfast cereal.

This music-video parody of Devo features the throwaway line (1:26) “You can eat a bunch of sushi then forget to leave a tip; dare to be stupid!” Then, as now, the ballpark hot dog reigns supreme, but in 1988, major league stadiums were beginning to experiment (the horror, the horror!) with new concessions like sparkling water, yogurt, Chinese food, and sushi. In 1988, the Dodgers tried selling sushi but stopped after four or five games, according to the Lewiston Journal, because fans didn’t bite. When Hideo Nomo joined the team in 1995, there were roving vendors selling sushi in the stands of Dodger Stadium. At some point in the 1990s, the stadium began selling prepackaged sushi but only at the Dodger Food Court, which would close after the fourth inning. One local restaurant critic declared the $7 mix of shrimp, inari, tamago, California rolls, and cucumber rolls “pretty good.” In recent years concessions have included curried chicken salad, yogurt parfaits, turkey wraps, fish tacos, and assorted sushi, including California rolls, spicy tuna rolls and cucumber rolls.


In “One Fish, Two Fish, Blowfish, Blue Fish,” one of the best-ever episodes of The Simpsons, Homer and Marge decide to try something new. After eating his way through the sushi menu at the Happy Sumo, he demands fugu. The apprentice incorrectly prepares the poisonous fish, and Homer is told he has 24 hours left to live. (22, actually, since Dr. Hibbert kept him waiting.)

Judgement City (technically, Purgatory) has all the best sushi bars, there’s no waiting, the food is ready instantly, and you can eat all you want without gaining an ounce. In this oddball Paul Mazursky rom-com, Woody Allen and Bette Midler play a couple who decide to celebrate their 16th anniversary at the Beverly Center. Because that’s where aging yuppies go to treat themselves. (For the record, we’re also supposed to believe that Allen is a fast-talking sports lawyer.) Where does hubby decide to tell his wife he’s had an affair? Over sushi. In the early ’90s, sushi was strange enough to American palates that it could serve as a metaphor for the dangerous, enticing, and exotic Far East (see also Showdown in Little Tokyo). In the crime thriller Rising Sun, it’s also a stand-in for upper-class decadence. While investigating the death of a high-class escort, Wesley Snipes and Sean Connery discover (along with the rest of America) the concept of “naked sushi,” nigiri served on the nude body of a woman. It was all good until real restaurants—of the sort that cater to people who have more money than taste—wouldn’t stop aping the trend. When this movie was made, the “eating a hunk of wasabi without knowing what it is” gag was still original. That’s exactly what Ted Danson does when he goes on a date with Whoopi Goldberg. How could a man who was amaaaaazed by a factory that produced corn and flour tortillas not be gobsmacked by sea urchins? After fishing for the spiky echinoderms off the Channel Islands, Huell heads to the Santa Barbara sushi restaurant Piranha, where he samples these fruits de mer.

In the opening episode of the fifth season, Samantha (Kim Cattrall) is furious at her boyfriend for cheating on her and coins the term “eating another woman’s sushi” as a euphemism for oral sex. Later, in the Sex and the City movie, Samantha gets naked and covers herself in sushi as a Valentine’s Day surprise for her current boytoy.

This clip is not for the faint of heart but then none of Jackass is. Steve-O snorts two fat lines of wasabi with predictably disgusting results. (Do not watch before lunch.)

She came to see a man about a sword. In a small Okinawan sushi bar, following an argument between the chef and his assistant, Uma Thurman reveals that she doesn’t really care about the tuna or the warm sake. All she wants is to find Hattori Hanzo. After missing two days of performances, actor Jeremy Piven announced he was pulling out of David Mamet’s Speed-the-Plow on Broadway. The reason? Mercury poisoning from eating too much sushi. It sounded a little fishy to the show’s producers, but they lost their legal dispute against the actor. At least Piven didn’t trot out the A-list celeb’s favorite excuse: “exhaustion.”

The documentary about Jiro Ono, the 85-year-old sushi maestro of the three-star Michelin restaurant Sukiyabashi Jiro, moves slowly but, like its subject, displays consistency, dedication, and relentless precision. In a show that could be subtitled “What Can’t Larry David Kvetch About?” the dyspeptic star complains to the owner of the West Village restaurant Sushi Mambo about a leaky take-out container. Larry receives an apology, complete with a bow, but learns later that the gesture may have been a “shit bow.” A collaboration between TV personality Anthony Bourdain, writer Joel Rose, and illustrators Langdon Foss and Jose Villarubia, graphic novel Get Jiro! is set in a grim near-future where chefs rule L.A. (or a city very much like it) as though they’re crime lords — which they are. Enter a humble sushi chef who decapitates obnoxious patrons as deftly as he slices maguro.