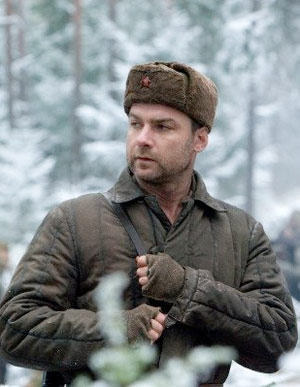 “I’m a mess,” says Liev Schreiber, shrugging off a black corduroy jacket, removing his sweater, and putting the jacket back on over a gray T-shirt. “I’ve been doing night shoots, and my 18-month-old son has whooping cough. I haven’t slept for days.” As he slides into a banquette at the back of Sushi Roku on 3rd Street, he makes note of the VIP environs. “They gave us a special room,” he says, with more appreciation than another celebrity might think to muster. “Nice!”

Schreiber, who lives in New York with his girlfriend of three years, Australian actress Naomi Watts, has shuttled west to introduce his new film, Defiance, to the closing-night crowd at the AFI Festival. Directed by Ed Zwick, the movie stars Schreiber, Daniel Craig, and Jamie Bell as a band of Jewish brothers who flee the Nazis after the invasion of Poland. They set up a bare-bones camp in the Belorussian forest and gradually acquire a large settlement of refugees, an arrangement that becomes increasingly difficult to support. Schreiber, whose mother’s side of the family is of Eastern European Jewish descent, gives a thumbs-up to the movie, but he’s uncomfortable with the subject matter. “I’m fascinated by the Holocaust,” he says. “It’s part of my grandfather’s story. But there’s something about Holocaust films, if I could be so crass as to call it a genre, that I find really irksome. They’re easily divisive and manipulative and so emotionally potent and dangerous. I have such a strong reaction, somewhere between being afraid I’m connected to the subject matter or, maybe worse, that I’m not.”

Such ambivalence notwithstanding, the Holocaust runs as a leitmotif through Schreiber’s résumé, from early films like Jakob the Liar and the CBS miniseries Hitler: The Rise of Evil to Everything Is Illuminated, the sweet, quirky 2005 road movie he directed, based on the novel by Jonathan Safran Foer. Elijah Wood stars as a neuroses-laden Jew who goes to Ukraine to find the woman who saved his grandfather from the Nazis. Schreiber was finishing his own script about an American seeking his Ukrainian ancestry when he came across Foer’s work in The New Yorker. “In my story the American gets rolled by a Ukrainian hooker,” he says. “When I read Jonathan’s story, I thought, ‘This is much more elevated.’ I took the structure of my script and used his story.”

Schreiber has a next-generation Rod Serling depth to his voice, a trait that nets him a steady stream of narration work. At six feet two, with a face he aptly describes as a cross between Balthazar Getty and Alvin the Chipmunk, he doesn’t telegraph a particular character type. His flinty eyes seem to dissect a situation one minute; a self-deprecating observation and sheepish smile shed doubt on their coolness the next. He is, in short, complicated, an ideal psychological amalgam for layered characters like Meryl Streep’s diabolical pawn of a presidential nominee in the 2004 remake of The Manchurian Candidate, or the opinionated but insecure Orson Welles in RKO 281. In A Walk on the Moon he’s an explosive mensch married to a cheating Diane Lane. He works the other side of the fence in The Painted Veil, as the married seducer of a naive newlywed. It’s unclear whether Schreiber’s suave diplomat is a classic Lothario or a man in love, an intriguing duality perhaps fueled by the fact that Watts was playing his lover.

“I’ve ordered too much food, which is not unlike me,” he says, surveying the sashimi, edamame, eggplant, seaweed salad, and popcorn shrimp on the table. While exploring one dish after another with his chopsticks he explains how Bertolt Brecht, the subject of his undergrad thesis at Hampshire College, informs his approach to acting, providing examples with variously nuanced deliveries of “If it were done when ’tis done, then ’twere well / It were done quickly,” from Macbeth. It’s theater that keeps Schreiber, who is 40, rooted in New York. He won a Tony for his role in David Mamet’s Glengarry Glen Ross, and his facility with the Bard—he’s a longtime Shakespeare in the Park star and sits on the board of New York’s Public Theater—prompted The New York Times to proclaim him the best Shakespearean actor of his generation. “But if you believe that, then you have to believe the worst things said about you,” he says. “One writer called me ‘the somnambulant Liev Schreiber.’?”

For each heady film or theater role Schreiber has an easy-on-the-intellect counterpoint: the Scream trilogy, The Omen remake, an arc on CSI. He plays a frock-wearing security guard in Ang Lee’s upcoming Taking Woodstock and Wolverine’s nemesis Victor Creed (aka Sabretooth) in the next X-Men installment. “Hugh [Jackman] and I did a lot of fight training,” he says. “They worked out a really fantastic thing where they rigged me so I could run on all fours like a big-game cat. When I jumped in the air, I could land on my hands and my feet followed behind. That was fun.”

Schreiber’s childhood rarely lacked for drama. His mother, who now lives on an ashram in Virginia, was, as Schreiber puts it, “this far-out Socialist Labor Party hippie bohemian freak who hung out with [William] Burroughs.” His father, seven years her junior and a WASP from Bucks County, Pennsylvania, was 22 when Liev was born. The family’s move to a commune in Canada ended badly. His father, an aspiring actor, embraced free love with relish, Schreiber says, and incited his mother to “do some crazy shit.” Ultimately she won custody of Liev and moved with him to a cold-water flat on Manhattan’s Lower East Side. She drove a cab to make ends meet.

Schreiber, estranged from his father until his teens, was a loner. “I spent an awful lot of time at the window,” he’s said. “I was one of those ‘Can I play?’ kids whom people didn’t want in the group.” He stole things—money from the yoga school where his mother worked, a leather jacket from his uncle. He spent two years at Swami Satchidananda’s ashram in Connecticut before going to Friends Seminary in Manhattan. When he got tired of playing in the school band, he switched to drama, but it wasn’t until he performed a one-man show in his senior year at Hampshire that he took acting seriously. “That was a new wave of energy in my life,” he says, “popularity and people thinking I was special, and girls.” He went on to study theater in London before graduating from the Yale School of Drama.

Schreiber and Watts, who was weeks away from giving birth to their second child during our dinner, met at the Metropolitan Museum of Art’s masquerade ball four years ago. “I was there to promote Everything Is Illuminated,” he says. “She was there with Benicio del Toro and Sean Penn, making me feel very small.” The tabloids periodically speculate on whether the couple will marry. “Naomi is my life, there is no doubt about that,” he says. “One of the unfortunate things about the business we’re in is that our personal life belongs to other people more than we may want it to. The problem for me is, I think that a wedding should be intimate and not have any of the burden of judgment or showmanship. That situation hasn’t arisen for us. We’ve been too busy living our lives and making babies.”