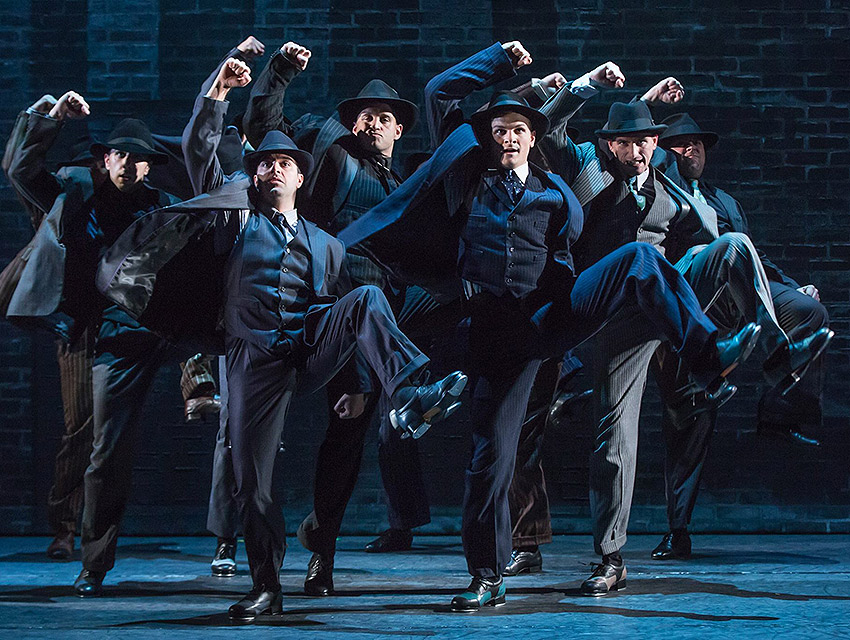 When you are the director and choreographer of one of the biggest hits in theatre history, you can pretty much do whatever you want. For Susan Stroman, who won Tony Awards for directing and choreographing Mel Brooks’ The Producers, she did what she always does after a show opens. “No matter what kind of review we get, I always have a meeting the next day for a new show.” At some point one of those meetings was with Woody Allen, who was interested in adapting his film Bullets Over Broadway as a musical. She said yes, and the result of Stroman’s collaboration with Allen can be seen on stage at the Pantages Theatre through January 24.

“When I got the call from him to meet up,” she says, “I was thrilled about it. It seemed to be a perfect story to turn into a musical because it’s a backstage story, which work well as musicals. But it’s not just a backstage story; it also brings up the idea of, how much would you compromise for your art? For those of us in theatre, that question comes up a lot.”

Stroman says Allen was reworking the show all the way through previews. “It’s wonderful to take a screenplay and see how you can now apply the rules of a musical to it,” she says. “That was the challenge, and Woody was up for that challenge. I would work with him in the morning, and then at 6 p.m., the bell would ring, and a messenger would be there with a bunch of yellow pages of how to turn it into a musical. He would come to every preview, and the next day he’d come in with new jokes for each actor. It was like a Christmas present.”

Allen is well known for his use of music in his films. The songs here were not written for the show, but rather carefully selected by Stroman and Allen. “He wanted to use the music of the time,” she says. “That was the first challenge: to find songs that would not only be appropriate for the time but for the character and then to move the plot forward. What was wonderful is we both have a vast knowledge of music from that time period. We formed a kinship musically. It was joyous.”

Less joyous was the response the show got in New York, particularly from one newspaper. Stroman feels the show was mistreated. “We did get wonderful reviews, but the New York Times was hard on us,” she says. “I do feel it was treated unfairly. I love the show, and everybody working on it was very devoted to it. It was one of the best books I’ve ever worked on. It is a crowd pleaser, and I think it has something to say. It is tough riding that roller coaster.” Bullets closed after 33 previews and 156 performances in 2014.

With shows like Contact, Showboat, Crazy for You, The Scottsboro Boys, The Producers and Bullets to her credit, Stroman has experienced high highs and low lows, but her outlook remains positive. “I think like any artist, you want people to appreciate your art,” she says. “You want people to love it as you love it. I’m very proud of The Scottsboro Boys. Even though it didn’t run long on Broadway, it has had a wonderful run regionally and a fantastic run in London. Perhaps Bullets was in the wrong season. It’s a big old-fashioned musical. I do think there’s still room for that. In the end what you remember is what was created. I feel very blessed and very lucky that my business is collaboration with artists. You can’t dwell on why things don’t work.”