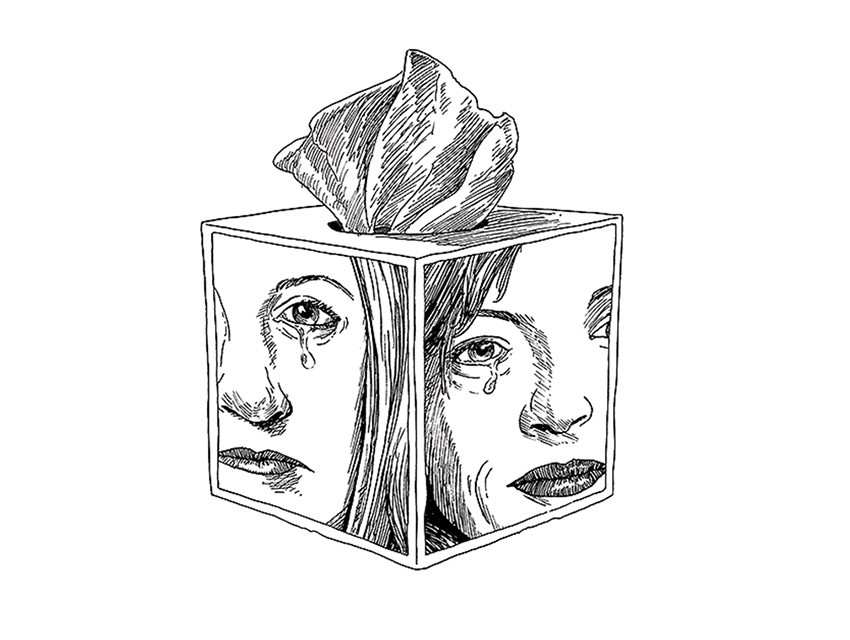 Admit it: You get misty when you hear Miley Cyrus sing “Wrecking Ball.” And when she belts out “The Mountain,” you have to restrain yourself from weeping. Okay, maybe that’s our issue, but we’re not entirely alone. “I think Miley Cyrus’s voice hooks into something very emotional,” says actress Sarah Thyre. “Even ‘Party in the USA’ makes me feel like, ‘Ohhhh, I was twelve years old once.’”

The song is also perfect material for Crybabies, the new podcast Thyre co-hosts with New Yorker writer Susan Orlean. Devoted to movies, songs, and anything else that gets the waterworks started, the show debuts today as part of Wolfpop, the just launched sister network of Earwolf. Both networks are owned by podcasting juggernaut Midroll Media, but Earwolf is comedian Scott Aukerman’s baby while funnyman Paul Scheer oversees content for Wolfpop.

In addition to Crybabies the Wolfpop lineup includes a film-themed podcast co-hosted by LA Weekly film critic Amy Nicholson (The Canon); another film-themed podcast co-hosted by Leonard Maltin (Maltin on Movies w/ Baron Vaughn); a cheeky gossip show for thirtysomethings desperate to stay relevant (OMFG!); a pair of shows with titles that leave little to the imagination (Denzel Washington is Greatest Actor of All Time Period and Reading Aloud with Nate Corddry); and The Sylvester Stallone Show, a talk show that pairs the action star with Scheer, not to kick ass but to chat about the news of the day. In all, Wolfpop is launching 13 podcasts today. Maybe podcasting really is in the midst of a renaissance.

“There are a million pop culture shows out there. I wanted ours to be special and different,” Scheer says. “In the launch we’re leaning on the movie side, but ultimately I want to have a show about comic books, a show about board games.  The worldview to me is culture, pop culture, and nerd geek kind of stuff. Earwolf is about comedy podcasts. With [Wolfpop] the foot forward is pop culture. I didn’t want every show to be from a comedy conceit. Shows can be more serious but I think they are funny too. That’s the weird balance. Like if we do an episode about David Foster Wallace, it’s not going to be a laugh riot.”

Most of this makes sense. But how did a writer who has penned books about orchid hunters and canine TV stars and an actress known for playing a no-nonsense gym coach on Strangers with Candy end up hosting a biweekly podcast about sobbing?

“I’ve always fantasized about doing something on radio,” Orlean says. “You could wear your pajamas and you could still be broadcasting. It would be the most fun thing.”

Thyre and Orlean started out as Twitter pals then met at the L.A. memorial for writer David Rackoff, a mutual friend.

Describing herself as a huge crier, Thyre says, “I’ve always wanted to do something where I talk to people about works of art that make them cry and whether they enjoy that feeling. I met with the guys at Earwolf and said I’d like to have a co-host. The minute I proposed Susan, they were like ‘Hell, yes. Bring her on!’”

For her part, Orlean says she was in a reverie when Thyre serendipitously called her. “This sounds like I’m making it up, but I was thinking about how much I value artwork that makes me cry. As much as I love humor, the things I savor tend to be the ones that hit me in the gut. There are many different ways that you cry but all of them are absolutely delicious.”

At a running time of 45 to 60 minutes, Crybabies begins with Orlean and Thyre riffing on a “Cry of the Week.”

“The one we tend to talk about with the most affection is the aching cry, the wistful cry. You’re enjoying the feeling of a missed connection or something that never happened. That’s my favorite kind of cry,” Thyre says.

Their guests’ sob-inducing choices haven’t always been obvious. Neko Case selected the banjo cover of Beethoven’s “Ode to Joy” that opens Raising Arizona. “To me it sounds like a rollicking bluegrass riff,” Orlean says. “But she picks that as something that made her cry. And that movie is ostensibly a comedy.

The next step? Getting Kleenex manufacturer Kimberly-Clark to underwrite the show. Not really. But guests will receive a packet of tissues printed with the show’s Tony Millionaire-designed logo. All the better to dab at their eyes and sniffle into while they’re recording. Because it would be sad if Crybabies didn’t leave you at least a little lachrymose.

Leonard Maltin: The Brand Name in Movie Criticism Has Reinvented Himself

Leonard Maltin Has Something to Say