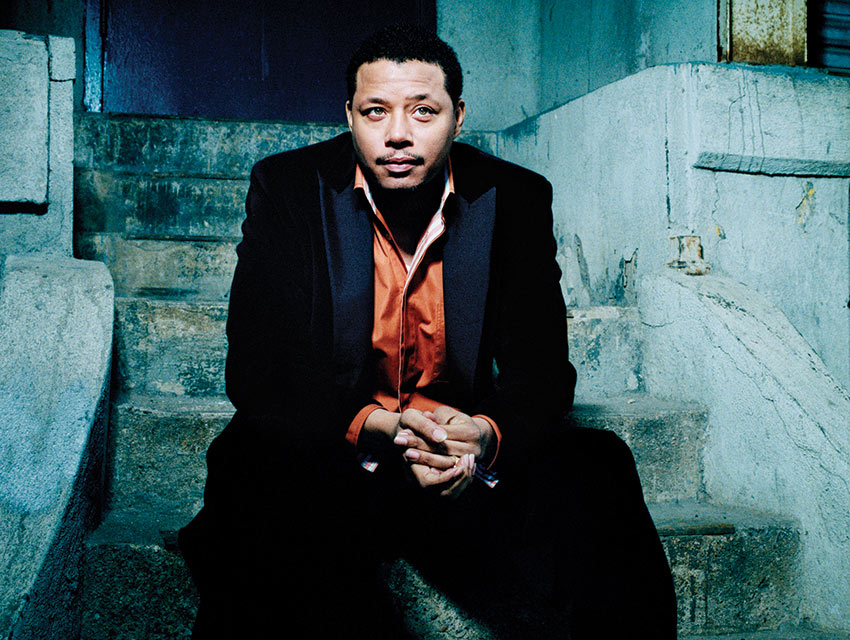 Terrence Howard wants to get from LACMA’s plaza to the La Brea Tar Pits below. Eyeing a discreet set of stairs, he pushes aside the stanchion and chain obstructing their entrance. “Hey!” growls a security guard from the bottom of the steps. “You’re supposed to go around!” Then she gets a load of her trespasser, a boyish sort in a gray velour tracksuit bouncing toward her with a lime lollipop in his mouth. “Ohhhhh!” she sings, opening her arms wide. “God bless you, bro! You prosper and keep on being successful, baby. I’ll pray for you.”

“Things always work out in the end,” says Howard. “A nice hug and a kiss. Just like being a child.” The 38-year-old actor has been fielding a whole lotta love of late. After his Oscar nomination for Hustle & Flow, the 2004 movie in which he played Djay, the philosopher- pimp with a few girls and a Chevy, Howard’s career took a perpendicular ascent. Although he’d been stealing moments for years, most recently in films like Hart’s War, Lackawanna Blues, Ray, Get Rich or Die Tryin’, and Crash, it took Hustle and a sage nod from the Academy to transform him into a bona fide A-team movie star.

This month lights the wick for a veritable career explosion. There’s The Hunting Party, opposite Richard Gere, then Neil Jordan’s The Brave One, in which Howard stars opposite Jodie Foster. In the first, he plays a guitar-toting cameraman reunited with a has-been reporter during a trip to postwar Bosnia. Gere, the reporter, shared some philosophy, “about women especially,” says Howard. “He said, ‘You can pick every blossom off a tree, but then the tree is no longer beautiful. Sometimes it’s better to just go by and catch a whiff .’ That went miles.” The Brave One, a gritty drama, features Foster descending into a dark world of retribution after her fiancé is killed in a savage Central Park attack. Howard, the detective working the case, recognizes the moral complications of her agenda. Foster recognized his performance. “She did the most beautiful thing,” he says. “She argued that my name be above the title. She said that was her only note on the film.”

Howard has wrapped Awake with Jessica Alba, August Rush with Robin Williams, and Iron Man, based on the comics series, with Robert Downey Jr. and Gwyneth Paltrow. “I’ve got a treat for you later,” he says, unwrapping another Dum Dum as we take in the primordial resin of the tar pits. “I’m going to play you my CD.” He and nine musicians recorded 11 songs this summer at Hollywood’s Spiral Recording, where clients include Mos Def and Justin Timberlake. The album will be released by Sony.

Leaving the tar pits, we amble east to the Page Museum, home to Ice Age fossils and reconstituted ancient beasts. Howard insists on paying for the tickets. “My momma would kick me in the head,” he says, handing over his credit card. Part wide-eyed ten-year-old, part self-appointed tour guide, he narrates his way through the exhibits and proves to be a font of early-predator information. On the giant ground sloth: “Mmmmm. Dinnertime! They were so easy to hunt. That’s what killed them.” On the sabertooth cat: “They could only open their mouths so wide, but they’d sink their teeth between the third and fourth vertebrae and kill their prey instantly.” Past yesterday’s camel and the American mastodon, a series of bird skeletons prompts his perspective on the theory of evolution. “I don’t believe that they’re the remnants of dinosaurs,” he says. “In the 1800s, Darwin said that if the fossil records should show that there are huge gaps between species, and they couldn’t find transitional links, that would be a deathblow to his view. They’ve been finding that for 100 years and still promote evolution as a fact. Teachers say subtle things: ‘Two hundred million years ago, when we crawled out of the oceans…’ No, that’s a theory, that’s not real.”

Howard, who has three brothers and six stepsiblings (“My father was a rolling stone”), grew up with the Good Word. “Then, when I was about 16, I bumped into some [Jehovah’s] Witnesses,” he says. “I thought I knew a lot, but I really didn’t. I studied with them for years.” Witnesses don’t celebrate Christmas or birthdays. They forbid sex outside marriage . “That’s where I had my troubles,” Howard says with a laugh. “I’m still working hard at that one. I’ll be a Witness one day, as soon as I can discipline myself in that area.”

Technically, he is married. His wife, Lori, filed for divorce in 2005, but he’s yet to sign the papers. (Their first marriage lasted 14 years. The second saw him packing his bags in eight months.) They have two daughters and a son and live two blocks apart in Plymouth Meeting, a suburb of Philadelphia. The couple are on good terms. “We do everything but sleep together,” Howard says. “She’s my best buddy. I wish I’d been more mature when we got married, but I made mistakes that a foolish young man would make.” The children go back and forth between Howard’s carriage house, once a stop on the Underground Railroad, and the home he built for the family. “They know that Daddy tried with all he could,” he says of the children, “but Daddy’s a screwup. I’ve got that same indelible fault that any man has. That need to procreate. When I was coming through immigration yesterday, I looked around and said, ‘Every one of these people got here through sex, because life demanded it.’ ”

After our museum excursion, we pile into a chauffeured black SUV, and Howard slips his CD, coproduced by Lauryn Hill’s musical director, Miles Mosley, into the console. As he gleefully conducts from the backseat, a spirited blend of strings, piano, flute, and guitar fills the car. The songs, and Howard’s lyrics, are both poppy and sophisticated, moving and light, a far remove from Hustle’s “Whoop That Trick” or “It’s Hard out Here for a Pimp.” He seems more excited by this than by his slate of movies and has told his managers he wants to concentrate on music for a while. “I owe it to the songs,” he says. “I’ve got to let this child, my artistic soul, see the world.”

His maternal grandmother, Marjorie, taught him his first guitar chords, but it’s just recently that Howard has taught himself piano, viola, and cello. “I could say I’m autodidactic,” he says, “but it’s my ancestral past that’s teaching me.” His paternal grandmother was actress Minnie Gentry. His mother sang Stylistics songs to him when he was a baby, and music was solace to his father. “He is an artist but worked as a contractor,” Howard says. “He’d get up at five, and when he got home at six, he’d take out his double album cover, pull out a dime bag of marijuana, and separate the seeds. I’d watch him roll a joint, put on ‘Space Oddity’ by David Bowie, and sit back. He’d take his first puff with ‘Ground control to Major Tom,’ and this smile would come across his face. Then he’d pick me up and dance with me through the room. After that we’d have dinner and pray.”

Howard has directed the chauff eur to drop us at the Four Seasons, where he’s staying. He greets the valet by name and is met by the publicist, big hugs, at the restaurant, where we’re escorted to a secluded table. Although he clearly enjoys the attention, Howard appears to engage his overdue celebrity with relief rather than entitlement, as a visa that allows him to be comfortable in a tracksuit in a gilded room, or to have his TV and its adult-channel temptations removed before his arrival. “We have our weaknesses,” he says. “The porn industry is an $11 billion industry. Don’t feed off my natural desire toward curiosity and sensuality if it’s leading in the wrong direction— which it has done.” As if on cue, Larry Flynt enters with a party of four. Howard studies him with benign detachment.

Howard orders off the menu: tuna tartare with soy sauce and extra chips, shrimp tempura roll, Arnold Palmer. The slices of tempura roll are large. Using chopsticks, I intend to bite one in half, but the seaweed refuses to sever, the shrimp is resistant, and despite my best efforts, a good portion dangles from my lips. Awkward. I poke the errant bit into my mouth, crowding my already stuffed upper palate. The whole shebang is beyond tooth range. I can’t chew it, can’t move it, can’t swallow it. But the sushi has an intuitive sense of direction and heads south, lodging itself in my gullet. Now I can’t breathe. An ill-considered sip of iced tea adds a drowning element to the incipient asphyxiation. Howard, tipped off perhaps by my bulging eyes and muffled snorts, asks if I’m okay. So do the men at Larry Flynt’s table. It crosses my mind that I’m about to die, and I feel a sudden imperative to expire somewhere less intimate; the hallway seems good. As I get up, Howard does, too, supremely calm. He wraps his arms around me from behind, makes a fist at my solar plexus, and gives two quick tugs. Bingo. I am breathing. Things always work out in the end.

Soon we are talking as though he hasn’t just saved my life with his first Heimlich (“I saw it on Mrs. Doubtfire. She saved Pierce Brosnan”). Howard is positing his theory about the shape of the universe. “This is what I want the article to be about,” he says. Given the turn of events, it seems a modest request. “When I was six, I wondered why bubbles were always round. I tried to make them into triangles, but they couldn’t do it. It turns out that once the pressure equalizes in the center of a bubble, the strongest thing exerting force on it is the weight of the universe pushing down equally on all points. Follow those points out to the edge of the universe and you have the shape of the universe. Some would argue that the universe is infinite. But, as you learn in algebra, an object must be equal to the sum of its parts. If the universe is made up of finite particles, everything inside of it has a boundary. Wouldn’t the universe be bound by the very last particle? And the common shape of those particles is what? A sphere. So, we have the shape of the universe. I just wait for any physicist to argue with me. I invite any conversation on this.” So do we. Share your thoughts at lamag.com.