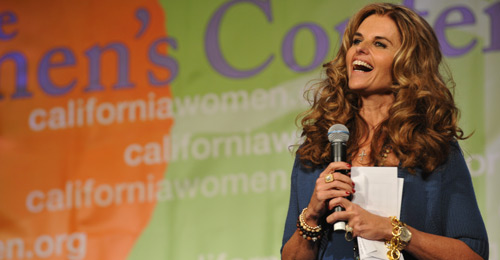 “Are there any vaginas in the house?!”

I laughed along with 14,000 other women (and a smattering of men) as Eve Ensler stated the obvious at the Women’s Conference at the Long Beach Convention Center last Tuesday.

The sixth-annual event, hosted by California First Lady Maria Shriver and Governor Arnold Schwarzenegger, brought celebrities and world leaders together to focus attention on issues that matter to women—like a higher-minded version of ABC’s The View.

There was no little irony for me in covering the event, which focused largely on the difficulties many women face in the “superwoman” act of balancing career and family.  Earlier that morning, I planted my two young children (one sick) in front of the TV so that I could squeeze in a shower before the babysitter arrived.  As a working mom, my superwoman powers are often nowhere in sight.

But when I arrived at the Women’s Conference, there were my heroes:  Madeleine Albright, Geena Davis, Annie Leibovitz, Caroline Kennedy, Paula Zahn, and many more, and the spirit of the day was infectious.

“I love the smell of estrogen in the morning,” said Katie Couric.  Here was a woman who raised her two daughters and continued to interview world leaders after her husband died of colorectal cancer in 1998.

The Women’s Conference is a day for us to dress up and come together to discuss what’s really going on behind the façade.  And as I looked at the sea of women around me, I realized that other women probably faced much bigger challenges in their day than a kid home with a cold.  How did they handle it?

Time and again, speakers addressed the difficulty of balancing work and motherhood and spoke of the need for women to act as a community.  “I think there’s a special place in hell for women who don’t help each other,” said Albright, the former Secretary of State.

Zahn, the former CNN news anchor, spoke about how she felt guilty one day early in her career about asking her boss if she could leave the office for a few hours to take her daughter to the doctor.  Albright, who has three grown daughters, echoed the sentiment:  “I think every woman’s middle name is ‘Guilt.’”

The conference also featured a dramatic session on “Overcoming the Unimaginable,” in which former kidnapping victim Elizabeth Smart spoke about her abduction from her home in Salt Lake City, Utah, in 2002.

Ensler, author of the award-winning The Vagina Monologues, reminded the audience of the danger girls and women still face around the world.  Ensler, who is also the founder of V-Day, a global movement to end violence against women and girls, beseeched females to stop trying to please everyone, and instead to try to provoke, to “listen to the voice inside you that might want something different.”

When Shriver hosted a panel on “Grief, Healing and Resilience,” things got somber.  The panel included Lisa Niemi, who spoke publicly for the first time since her husband, Patrick Swayze, died of pancreatic cancer in September.  It also included two women who have lost sons:  Center for American Progress Senior Fellow Elizabeth Edwards, whose 16-year-old son Wade died in a car accident in 1996, and actress Susan Saint James, whose 14-year-old son Ted died in a plane crash in 2004.  Shriver herself has recently experienced enormous loss. Her beloved mother, Eunice Kennedy Shriver, and her uncle, Senator Edward Kennedy, died in August.

After that tear-jerking session, I headed to “The Village,” a product suite in the exhibit hall where I could stop by the Target booth for free mini-manicures and makeovers or, forgetting everything I’ve ever learned about the importance of positive female body images, I could purchase a special edition convention Barbie for $50.

The evening concluded with the presentation of the annual Minerva Awards, honoring women who have made an impact in their communities and in the world.  Honorees included Agnes Stevens, whose “School on Wheels” provides tutoring for homeless kids;  Helen Devore Waukazoo, co-founder of the American Indian Friendship House;  Dr. Kathy Hull, founder of the residential pediatric hospice George Mark Children’s House;  and Dr. Jane Goodall, whose environmental and humanitarian youth program, “Roots and Shoots,” has nearly 150,000 members in 110 countries.

Alicia Keys, who works with the “Keep a Child Alive” organization to provide anti-retroviral medication to children with HIV/AIDS in Africa, ended the event on a lovely note.  “Let’s bring a kinder sensibility to the planet we live on,” she said before sitting down at a grand piano to play and sing—what else? — “Superwoman.”

As I was leaving, I noticed two women struggling to wheel an enormous, half-dismantled statue of breasts (clad in a giant bra) out of the arena.  I want to say I heeded Albright’s advice and helped them with their boob problem, but I didn’t.  I had a sick kid at home.  I headed for the parking lot, ready to hang up my wrinkled superwoman cape for the day.