Home Art A DTLA Gallery Reemerges After a Frightening Explosion and a Prolonged Pandemic... 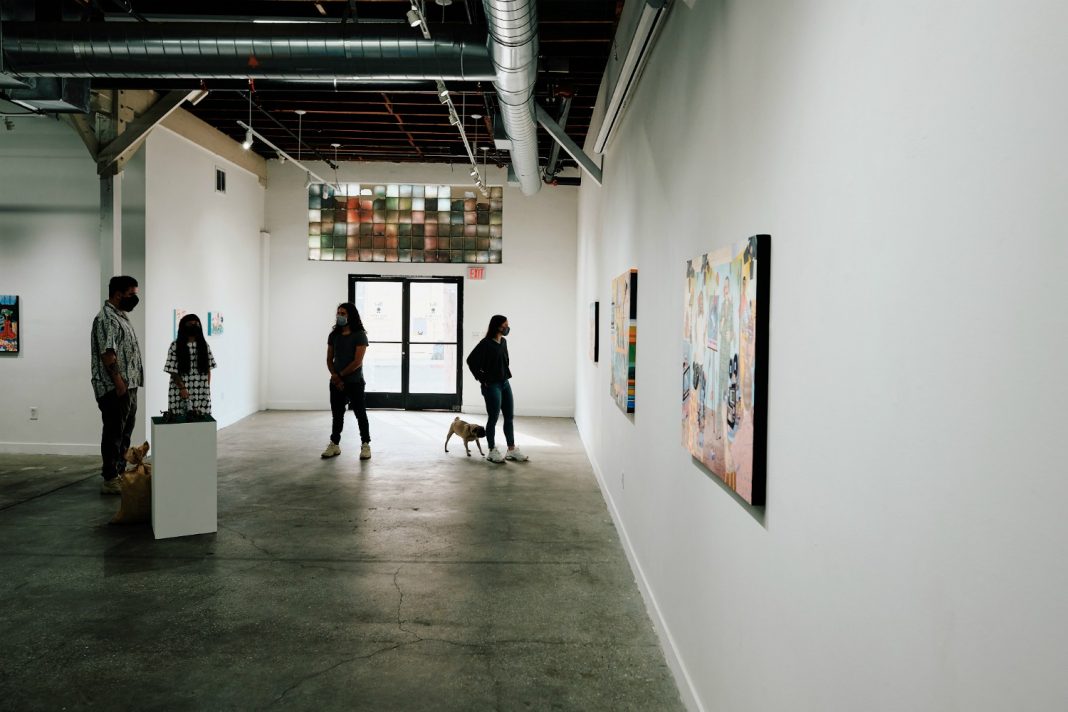 At around noon on a Saturday in late February, Bill Dunleavy was inside downtown Los Angeles’ Superchief Gallery with four other people when he felt the blast.

Portions of wall cracked. Furniture fell. Glass shattered. Dunleavy recalls running outside and being told head back into the gallery. When he did, he grabbed hard drives—”That way, we wouldn’t lose our entire history of everything we’ve done,” he explains—with the understanding that the building might burn. The Kohler Street space Superchief called home for six years had been rocked by an explosion at an adjacent building.

The Superchief crew was fortunate for a number of reasons. No one inside the gallery was injured. The art that was destroyed in the blast was covered by insurance. But, while the building didn’t burn, it was damaged to the extent that the they could no longer operate out of that space. Then, on the day they finished moving out the building, Los Angeles city officials handed down a COVID-19 stay-at-home order.

In early November, Superchief made its L.A. comeback with the opening of Wishful Thinking, a collaborative exhibition from Kristen Liu-Wong and Luke Pelletier, at 1700 Naud in Chinatown as part of the Blue Ribbon Studios’ Artist in Residency Program, an effort from Pabst Blue Ribbon and the quarterly magazine Monster Children to support artists during the pandemic.

Liu-Wong and Pelletier’s show, their second collaborative exhibition for Superchief, had been in the works for two years. Dunleavy gives a brief tour of the exhibition on our video chat. It’s a necessary, escapist collection in the midst of a devastating year, filled with bright colors, feasts, vacations, and sex. The title painting depicts an imagined appraisal of the show’s flyer on Antiques Roadshow. It’s value: $20,000. Dunleavy says that there was concern about presenting such a joyful show at the time of the election—you know, just in case. “We gambled and we won because Trump did not win the election,” says Dunleavy, “and everyone got to be extremely happy come time for the show to open.”

“Wishful Thinking” launched by appointment only November 7; those slots filled up fast and much of the work was sold. (The exhibit closes December 2.)

“Once your gallery is gone, all of a sudden, everybody gets very nostalgic for it.”

Founded in New York by Dunleavy and Edward Zipco, Superchief opened its Los Angeles branch two years later. Over the years, the gallery gained a reputation for attention-grabbing shows, like photographer Parker Day’s “Icons” exhibition in 2017 and Sarah Sitkin’s hyperreal “Bodysuits” collection, which opened the following year. But, with the double-whammy of the explosion and the pandemic, Superchief had to regroup. “We were spending a lot of time just dedicated to being a community space and a place to bring people together in person,” Dunleavy says. “And once that wasn’t possible anymore, it was a fun exercise to figure out how to do things for the community online.”

That meant focusing more on content creation. Dunleavy launched a podcast series called Chiefin’, which features lengthy interviews with artists, like Liu-Wong and Pelletier. In October, he put the spotlight on Albert Reyes, the L.A.-based artist known for the Halloween haunts he’s built in galleries and in his own backyard. This year, Reyes had to rethink his annual event as well, due to the pandemic. He built the haunted house in his front yard so that people could drive by and catch a glimpse of what has become a tradition. “I’m a huge fan of Albert and his dedication to what he does and all the incarnations of his maze,” says Dunleavy, adding that he tried to channel the late public television host Huell Howser in his interview.

Connecting with their community online also meant engaging in activism. During the Black Lives Matter protests, Superchief used its platform to spread news and information for followers in Los Angeles and New York. “Our Instagram viewership went up quite a lot as a result of that,” says Dunleavy. “And I think it’s been interesting to watch people who came to us through activism start to decide if they’re into the art we show as well.”

As for the future of Superchief in Los Angeles, Dunleavy is open to working on other pop-up events. He’s also continuing content creation. In the midst of this year’s upheaval, Dunleavy says that he learned the importance of documenting everything. “Once your gallery is gone, all of a sudden, everybody gets very nostalgic for it,” he says. “I just wish I had filmed everything and that I had a whole documentary ready to go right now.”

A new permanent space will likely have to wait until after the pandemic. Dunleavy says that after the explosion, which he describes as “super traumatizing,” he’s not planning to go back to the old neighborhood. “I don’t want to try to recreate our old location,” he says. “I’m excited to evolve and be a little bit different and a little more dressed up for the next round.”

RELATED: Known for His Haunted Houses, Albert Reyes Takes on the Nightmare of Modern America