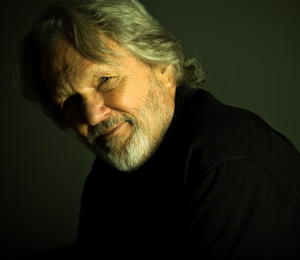 Kris Kristofferson’s show last night at the Walt Disney Concert Hall did not disappoint. Okay, I may not be the most objective observer, being a life-long fan. But to hear the man who wrote those songs sing them in that place… He was truthful and honest, proving once again that there has never been and never will be anyone quite like him. Ever his humble self, he seemed like a big kid alone with a guitar on that stage. More than once he turned in a circle to take in the room. When he discovered there were people sitting behind him, he reacted with childlike awe. Would I have liked a few more stories in between the songs? Of course. This is the man, after all, who landed his helicopter on Johnny Cash’s lawn, who discovered John Prine, who loved some of the most famous women of all time. But he was very nervous—his wife, Lisa, confirmed it backstage after the show—and it showed in the self-deprecating way he thanked the crowd. Sometimes it seemed he didn’t feel he deserved to be up there, ending songs before they were over (and not even singing all the verses) with a quick and sheepish, “Thank you.” But when he was singing, it seemed, the nervousness fell away. His voice was strong and the feelings behind the words were all there. He dedicated the sweet “From Here to Forever” from his latest album, Closer to the Bone, to his daughter Kelly (it was her birthday).  When he played “Please Don’t Tell me How the Story Ends,” you could tell by the way he said please that he’s an older man who has lived a full life and does not want to think about it being over. I received a letter after our October issue came out from a woman who’d read my piece about him. She called Kris Kristofferson an American National Treasure. I couldn’t have put it better.